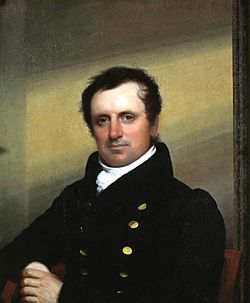 James Fenimore Cooper (September 15, 1789 – September 14, 1851) was a prolific and popular American writer of the early nineteenth century. He is particularly remembered as the novelist of the American frontier. He wrote numerous sea-stories as well, but is best known for the historical romances known as the Leatherstocking Tales, featuring frontiersman "Natty Bumppo." Among this series is his most famous works, including The Pathfinder, The Deerslayer and the Romantic novel The Last of the Mohicans, which many people consider his masterpiece.

Cooper was excoriated by Samuel Clemens for his supposed "literary offenses," but he successfully captured the spirit of "rugged individualism" that characterized frontier life in the New World and which accounts for his great popularity during his era.

Cooper was born in Burlington, New Jersey, on the 15th of September 1789, the eleventh of William and Elizabeth Cooper's twelve children. When James was one year old, his family moved to the frontier of Otsego Lake, New York, where his father established a settlement on his yet unsettled estates which became modern-day Cooperstown, New York, later home to the Major League Baseball Hall of Fame. His father was a judge and member of Congress. James was sent to school at Albany, New York and at New Haven, Connecticut, attending Yale College 1803-1805 as its youngest student. He was expelled, apparently for a dangerous prank involving blowing up another student's door as well as stealing food.[1]

Three years later he joined the United States Navy; but after making no more than two voyages in a merchant vessel to perfect his seamanship, and obtain his lieutenancy, he married Susan Augusta de Lancey in Mamaroneck, New York, on May 18, 1810. He resigned his commission in 1811. He had married into one of the wealthiest families in the state.

His father William died in 1810, when James was 20 years old, but the legacy he left his son influenced his entire career. Almost one half of Cooper's novels are about populating the wilderness; in The Pioneers his father appears directly, as Judge Marmaduke Temple of Templeton. 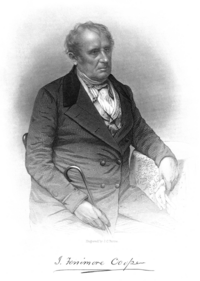 Cooper settled in Westchester County, New York, the “Neutral Ground” of his earliest American romance, anonymously producing his first book, Precaution (1820), a novel of the fashionable school. This was followed by The Spy (1821), which was very successful at the date of issue; The Pioneers (1823), the first of the Leatherstocking series; and The Pilot (1824), a bold and dashing sea-story. The next was Lionel Lincoln (1825), a feeble and unattractive work succeeded in 1826 by his most famous novel, the Last of the Mohicans, largely considered to be Cooper's masterpiece. Quitting America for Europe he published in Paris The Prairie (1826), the best of his books in nearly all respects, and The Red Rover, (1828).

At this period Cooper's unequal and uncertain talent would seem to have been at its best. These novels were, however, succeeded by one very inferior, The Wept of Wish-ton-Wish (1829); by The Notions of a Travelling Bachelor (1828); and by The Waterwitch (1830), one of his many sea-stories. In 1830 he entered the lists as a party writer, defending in a series of letters to the National, a Parisian journal, the United States against a string of charges brought against them by the Revue Britannique; and for the rest of his life he continued skirmishing in print, sometimes for the national interest, sometimes for that of the individual, and not infrequently for both at once.

The opportunity to make a political confession of faith appears not only to have fortified him in his own convictions, but to have inspired him with the idea of elucidating them for the public through the medium of his art. His next three novels, The Bravo (1831), The Heidenmauer (1832) and The Headsman: or the Abbaye of Vigneron (1833), were expressions of Cooper's republican convictions. The Bravo depicted Venice as a place where a ruthless oligarchy lurks behind the mask of the "serene republic." All were widely read on both sides of the Atlantic, though The Bravo was a critical failure in the United States.[2] 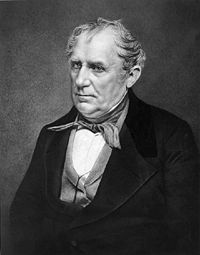 In 1833 Cooper returned to America and immediately published A Letter to My Countrymen, in which he gave his own version of the controversy in which he had been engaged and sharply censured his compatriots for their share in it. This attack he followed up with The Monikins (1835) and The American Democrat (1835); with several sets of notes on his travels and experiences in Europe, among which may be remarked his England (1837), in three volumes, a burst of vanity and ill temper; and with Homeward Bound and Home as Found (1838), notable as containing a highly idealized portrait of himself.

All these books tended to increase the ill feeling between author and public; the Whig press was virulent and scandalous in its comments, and Cooper plunged into a series of actions for libel. Victorious in all of them, he returned to his old occupation with something of his old vigor and success. A History of the Navy of the United States (1839), supplemented (1846) by a set of Lives of Distinguished American Naval Officers, was succeeded by The Pathfinder (1840), a good “Leatherstocking” novel; by Mercedes of Castile (1840); The Deerslayer (1841); by The Two Admirals and by Wing and Wing (1842); by Wyandotte, The History of a Pocket Handkerchief, and Ned Myers (1843); and by Afloat and Ashore, or the Adventures of Miles Wallingford (1844).

From pure fiction, however, he turned again to the combination of art and controversy in which he had achieved distinction, and in the two Littlepage Manuscripts (1845—1846) he wrote with a great deal of vigor. His next novel was The Crater, or Vulcan's Peak (1847), based in the Pacific, in which he attempted to introduce supernatural machinery. His next book Oak-Openings, or The Bee-Hunter described his time in Schoolcraft, Michigan, and the main character in the story, the Beekeeper, was patterned after a real person, Basil Harrison, the area's first pioneer. Jack Tier (1848), the latter a curious rifacimento of The Red Rover was followed by The Sea Lions (1849); and finally by The Ways of the Hour (1850), written with a purpose, considered to be a sociological novel and commentary on social mores of the time; which was his last book.

The five Leatherstocking novels chronicle the life of Nathaniel "Natty" Bumppo, who lives in the frontier (which moves steadily westward with each successive novel,) at the intersection of European and Native American culture. Bumppo is a hybrid of these cultures; in each book, he has a different Native American name, and it is by these names that he is known. These books are a lucid and insightful study of the encounter between the two cultures, from the point of view of a man who manages to straddle the divide between them.

The Last of the Mohicans

The Last of the Mohicans first published in January 1826, was one of the most popular English-language novels of its time, and helped establish Cooper as one of the first world-famous American writers. Although stylistic and narrative flaws left it open to criticism since its publication, and its length and distinctive prose style have reduced its appeal to later readers, The Last of the Mohicans remains embedded in American literature courses. It is the most famous of the Leatherstocking Tales.

Mohicans was the second book by Cooper, following Pioneers in 1823, to feature the pioneer Nathaniel "Natty" Bumppo, who is usually called Hawkeye. Bumppo was a personification of rugged individualism and pioneer spirit that remains central to the American identity to this day. Purportedly, this was supposed to be a novel of the American Indians, and not a tale of romantic relationships that Cooper had found dissatisfactory and prompted him to begin his writing career.

The story is set in the British province of New York during the French and Indian War, and concerns a massacre of a colonial garrison and a fictional kidnapping of two sisters, who were the daughters of the commander of Fort William Henry. Parts of the story may have been derived from the capture and death of Jane McCrea, in July 1777 near Fort Edward, New York, by members of an Algonquian tribe.

Two Native American tribes (Mohican and Huron), typified in the characters of the noble Chingachgook and Uncas and the gothic evil of Magua, are stylized and deeply inaccurate, but were also influential on the public imagination, particularly as it was debating the means and morality of Indian removals.

The plot involves Hawkeye and his Mohican companions Chingachgook and Uncas escorting the Munro sisters, the dark-haired Cora and the blonde Alice, through the woods of New York to Fort William Henry. Also in the party are British army Major Duncan Heyward and a psalmist named David Gamut. They engage in deadly fights along the way against Hurons led by Magua in a cycle of capture and rescue and recapture. An encounter with another American Indian tribe called the Delaware in the second half of the novel will prove crucial towards the end.

The book ends in tragedy, with Uncas and Cora perishing. Magua perishes from Hawkeye's rifle as he hangs off a ledge.

Cooper developed his account based on existing writings and his imagination, rather than actual contact with any individuals. However, the history of the bitter, vengeful Magua, who was once beaten and humiliated by Colonel Munro, shows deep understanding of the treatment of captives by the Indian tribes. His treatment of the Native Americans shows a deep sympathy for their culture. 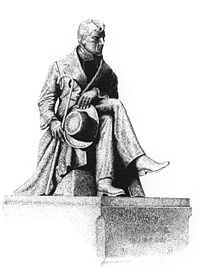 Cooper spent the last years of his life in Cooperstown, New York (named for his father). He died of dropsy (probably edema) on September 14, 1851 and a statue was later erected in his honor. Much of the factual information known about the author was provided by his eldest daughter Susan Fenimore Cooper, who provided background information about Cooper's writings and as his literary executor, worked to keep his legacy alive. In 1883 she published Small Family Memories, a prime source for Cooper's early life (1816-1828), including his early writings.

Cooper was certainly one of the most popular nineteenth century American authors. His stories have been translated into nearly all the languages of Europe and into some of those of Asia. Honore de Balzac admired him greatly, but with discrimination; Victor Hugo pronounced him greater than the great master of modern romance, and this verdict was echoed by a multitude of inferior readers, who were satisfied with no title for their favorite less than that of the "American Walter Scott." As a satirist and observer he is simply the “Cooper who's written six volumes to prove he's as good as a Lord” of Lowell's clever portrait; his enormous vanity and his irritability find vent in a sort of dull violence, which is exceedingly tiresome. He was most memorably criticized by Mark Twain whose vicious and amusing "Fenimore Cooper's Literary Offences" is still read widely in academic circles.

Sources for this table include: