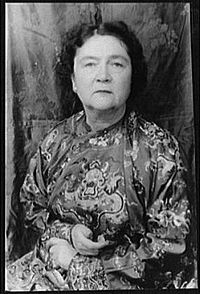 Marjorie Kinnan Rawlings (August 8, 1896 – December 14, 1953) was an American author who lived in rural Florida and wrote novels describing the richly detailed natural settings of the Florida backcountry and the hard scrabble lives of those who settled it. Her best known work, The Yearling, about a boy who adopts an orphaned fawn, won a Pulitzer Prize for fiction in 1939. The movie version of The Yearling, came out in 1946 and starred iconic actor Gregory Peck and Jane Wyman, who both were nominated for Academy Awards.

Marjorie Kinnan Rawlings was a pioneer environmentalist who reacted against the growing urbanization around her. Many of her works explored the importance of humans living in harmony with nature. Some have compared her semi-autobiographical novel Cross Creek to Henry David Thoreau's Walden.

Additionally, she was an early supporter of Civil Rights when such a stand was unpopular in the American South. As a result of her involvement she formed relationships with Pearl Primus, Mary McLeod Bethune and Zora Neale Hurston.

Marjorie Kinnan Rawlings was born in 1896 in Washington, DC. She always loved writing and in her youth won a prize for a story she submitted to the Washington Post. Her father, Arthur Frank Kinnan worked in the U.S. Patent office as an attorney. After his death in 1914 she and her mother Ida May Traphagen Kinnan moved to Wisconsin where she enrolled at the University of Wisconsin-Madison.

She received a degree in English in 1918 and the following year she married fellow student Charles Rawlings, also a writer. The couple moved to Louisville, Kentucky and then Rochester, New York, where they both worked as journalists for various newspapers.

While working for the Rochester Times-Union she began to write poems that appeared daily for nearly two years, beginning in 1926. Organized by task, the poems graphically depict the life of a housewife (mending, baking, dusting, and the joy of a sunny window) with wisdom and humor. The poems were syndicated in more than 50 papers nationwide.

In 1928, with a small inheritance from her mother, the Rawlings' purchased a 72-acre (290,000 m²) orange grove near Hawthorne, Florida, in a hamlet named Cross Creek, for its location between Orange Lake and Lochloosa Lake. Later Cross Creek would gain fame as the source of inspiration for much of her writing. She wrote a semi-autobiographical novel that was titled Cross Creek.

She was fascinated with the remote wilderness and the lives of the Florida Crackers. These rugged and independent people, although poor, inspired her with their resourcefulness and their close, harmonious relationship to nature. She would write about their way of life: hunting, fishing, farming and sometimes even moonshining. Skeptical in the beginning, the local residents soon warmed to her and opened up about their lives and experiences. On more than one occasion she lived with one of these families in order to gather materials and ideas for her writing.

Her first novel, South Moon Under, was published in 1933. It became a Book-of-the-Month Club Selection as well as a finalist in the Pulitzer Prize competition. The novel captures the richness of Cross Creek and its environs, and incorporates local folklore about the moon and its phases. That same year, she and her husband were divorced. One of her least well received books, Golden Apples, came out in 1935. However, in 1938 she won international recognition with her book The Yearling.

With money she made from The Yearling, Rawlings bought a beach cottage at Crescent Beach, Florida, ten miles south of St. Augustine, Florida. In 1941 she married Ocala hotelier Norton Baskin, and he remodeled an old mansion into the Castle Warden Hotel in St. Augustine. After World War II he sold the hotel and managed the Dolphin Restaurant at Marineland, which was then Florida's number one tourist attraction. Rawlings and Baskin made their primary home at Crescent Beach.

Norton Baskin survived her by 44 years, passing away in 1997. They are buried side-by-side at Antioch Cemetery near Island Grove, Florida. Rawling's tombstone, bears the inscription Through her writing she endeared herself to the people of the world.

Rawlings, before finding success with her novels, submitted many of her short stories about the local and colorful natives of Cross Creek to Scribner's Publishing House. The collection, When the Whippoorwill features one of her best stories, Gal Young Un, which won the O. Henry Memorial Award in 1932. It was through her association with Scribner's that she became the protégé of legendary editor Maxwell Perkins. This relationship brought her into the company of a literary elite which included fellow writers Ernest Hemingway, Thomas Wolfe, F. Scott Fitzgerald, Robert Frost and Margaret Mitchell.

It was Perkins who suggested that she write a book in the vein of Mark Twain's Adventures of Huckleberry Finn, one that would appeal to both a child and adult audience. The story's coming-of-age theme tells of a young boy, Jody Baxter, and his relationship to an orphaned fawn that he befriends. The story's subplot is about the family's struggle for survival in the Florida wilderness in the late 1800s. Jody's relationship with his father is severely tested when he is ordered to kill the fawn that is eating the family's crops. The story's protagonist, Jody, a "yearling" himself, enters adulthood by coming to terms with loss and hardship. William Soskin in a New York Herald Tribune Book Review said of the story, "The Yearling is an education in life that is far removed from our dreary urban formulas...[This] story of a boy and an animal becomes one of the most exquisite I have ever read."[1]

The novel, which won the Pulitzer in 1938 quickly went on to become a classic and, in 1939 a beautifully illustrated edition was produced with original artwork done by famed illustrator N. C. Wyeth. The book remained on the best-seller list for 93 weeks and sold 240,000 copies in its first year. That same year she was elected into the National Academy of Arts and Letters.

Her nonfiction, autobiographical book, Cross Creek was published in 1942. Gordon E. Bielow in Frontier Eden summed up the anecdotal and homespun narrative by saying, "Through her tales the author reveals herself.... her philosophy of life and her mystical feeling for the land and nature."[2]

It was almost a decade before her next novel, The Sojourner, would be published. The novel was set in the Northeast, instead of her familiar Florida setting, but dealt with familiar themes of loneliness, alienation, and time. The Sojourner was published in January 1953 and Rawlings died in December 1953.

When Rawlings died she left incomplete a biography of southern writer Ellen Glasgow, whose novels and short stories she admired.

A posthumously-published children's book, The Secret River, won a Newberry Honor in 1956.

In 1988, 35 years after her death, a manuscript that she had done in 1928 surfaced unexpectedly. Titled Blood of My Blood it was published in 2002 by the University Press of Florida. The autobiographical novel details the strained relationship Rawlings had with her mother, Ida, who is portrayed as a homely, domineering, and manipulating person. Her father comes across sympathetically in the book. The manuscript was originally submitted to a contest in 1929. It was returned to her with a letter indicating that it "could not hope" to win. She never made any mention of it in her letters, biographies, or bibliographies, and even her editor, the famous Maxwell Perkins, apparently never knew of it. The only editing done to the manuscript was the correction of misspelled words.

Much of Rawlings' writing deals with the clash of two very different ideologies: Cracker culture and modern culture. Florida Crackers, were the poor and isolated group of white people situated in a remote area of northern Florida who, despite modern capitalism in the early twentieth century, continued to exist largely within a barter economy.

Crackers, for the most part, maintained a barter economy, wherein crops, game, livestock, eggs, or animal pelts were traded for other essentials. The scrubland was considered common property, belonging not to one individual, but to all. Livestock grazed and roamed freely on common land. Game was hunted not for sport, but rather for food and other practical purposes; and to maintain ecological harmony and a replenishing food supply, animals were not hunted to extinction.[3]

Shew used the Cracker culture to contrast the purity of their harmonious natural lifestyle to that of the developing modern culture and its disassociation from nature.

Cross Creek was well received by both the critics and the public, except for a neighbor of Rawling's who found issue with the way she was depicted in the book. Her friend, Zelma Cason, sued Rawlings for defamation of character over a passage in the book that she found unflattering. The trial was to take a toll on both Rawling's health and career, although she was ultimately exonerated of libel.

In a letter to her lawyer, Rawlings comments on the effects the trial would have on other writers: "…what is to happen to all biography and especially autobiography, if a writer cannot tell his own life story, as I did in Cross Creek? And one cannot write his own life story without mentioning, short of libel, others whose paths have crossed his own. This is certainly in the realm of unquestionably legitimate writing" (Bigelow 261).

The trial highlighted the dilemma writers face who draw on personal experience whether they are writing autobiography, or merely fictionalized memoirs that often blurs the line between fiction and nonfiction. In a jury trial she was found not guilty, but an appeal went all the way to the Florida Supreme Court and resulted in a judgment against Rawlings for one dollar.

Even though Rawlings died before the Civil Rights Movement she took public stances against the Army's racial segregation policy and against Cross Creek's whites-only school bus policies. When the African-American author Zora Neale Hurston visited her in 1943 she allowed her to spend the night knowing that her neighbors would disapprove.

In addition to the The Yearling, Gal Young Un', based on her short story with the same name, was adapted for film in 1980 as was Cross Creek (1983). In Cross Creek she was portrayed by Mary Steenburgen, Rip Torn as Marsh Turner, Alfre Woodard as Geechee, and Dana Hill as Ellie Turner all received Academy Award nominations for their work as supporting actors (Second husband Norton Baskin, then in his eighties, made a cameo appearance in the latter movie.)

"The Yearling" A Japanese animated version (titled "Kojika Monogatari") was created in 1983.

In 1986 Rawlings was made a member of the Florida Women's Hall of Fame.

The Marjorie Kinnan Rawlings Society was founded in 1987 by Phil May, Jr. of Jacksonville, Florida, to encourage study of, critical attention to, and general interest in the work, career, and legacy of Rawlings, as well as to facilitate a broader discussion—among scholars, critics, teachers, students, and readers everywhere—of writers who have taken the South as their subject.

The Marjorie K. Rawlings Baskin Scholarship Fund was established at the University of Florida in Marjorie's honor by the estate of Norton Baskin upon his death in 1997. It was established for graduate students inclined toward the development of American literature and the promotion of its study.

Retrieved from https://www.newworldencyclopedia.org/p/index.php?title=Marjorie_Kinnan_Rawlings&oldid=1085998
Categories:
Hidden category:
This page was last edited on 6 November 2022, at 15:59.
Content is available under Creative Commons Attribution/Share-Alike License; additional terms may apply. See Terms of Use for details.