Barter is a type of trade where goods or services are directly exchanged for a certain amount of other goods or services; no money is involved in the transaction. The first instances of trade between individuals were conducted through barter agreements. Money developed later, as a mediating form of exchange. Barter still exists in certain societies, differing from traditional gift exchange as bartering consists of a specific economic transaction specifying the reciprocal items to be given and has no ceremonial component. A resurgence of bartering occurred with technological advances, particularly the development of the internet which permitted communication on an increasingly globalized scale. Direct exchange of goods and services, without need for international currency exchange has proven attractive to many, and challenges the monetary system to adapt to changing needs of traders who are developing relationships that break down political and national barriers.

Barter may be defined as the direct exchange of goods or services with which there is no use of commonly accepted currency. The term “barter” is frequently used as a synonym for "negotiation," in which the two parties engage in a back-and-forth discussion over the price of an item, but this usage is incorrect. Rather, barter can be used correctly as a synonym for “counter-trade”; however, “counter-trade” most often describes a form of international barter.

Did you know?
Barter differs from gift exchange in that in barter the reciprocal exchange is immediate and has agreed upon terms

Bartering also differs from the practice of gift exchange, due to the bartering system involving an agreement on what will be "traded" or "bartered" between two traders. In the practice of gift exchange, there are no agreed upon terms on what will be given to the recipient of a gift. What is given as a gift is up to the discretion of the gift giver, and often times involves some level of honor or prestige in what is being presented. Gift exchange may also contribute to greater levels of socialization amongst the gift exchangers. In the barter system, on the other had, bartering is driven by the basic need for a commodity or a service, and does not necessarily promote greater levels of socialization between traders. 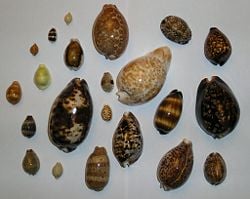 Cowrie shells were used in trade

The beginning of the barter trade originated at the time human societies began to develop, and continues to exist in some societies today. Modern day money developed through the trades and exchanges of bartering with the primary exchange being that of "cattle." Cattle, which included everything from cows to sheep to camels, was the oldest form of modern day money. This developed into the trade of shells and other items, and continued to evolve all the way to the modern form of paper money in use today.

Bartering is traditionally common among people with no access to a cash economy, in societies where no monetary system exists, or in economies suffering from a very unstable currency (as when very high rates of inflation hit) or a lack of currency. In these societies, bartering oftentimes has become a necessary means of survival.

In order to organize production and to distribute goods and services among their populations, many pre-capitalist or pre-market economies relied on tradition, top-down command, or community democracy instead of market exchange organized using barter. Relations of reciprocity and/or redistribution substituted for market exchange. Trade and barter were primarily reserved for trade between communities or countries.

Although bartering may seem like a simple concept of trade, there are a number of drawbacks to the system. One disadvantage of bartering is that it depends upon a mutual coincidence of wants. Before any transaction can be undertaken, each party must be able to supply something that the other party demands. A related problem lies in the potentially high transaction costs of traders spending time and money in the effort to search for each other. To overcome this, and the mutual coincidence problem, some communities developed a system of intermediaries who can store, trade, and warehouse commodities. However, the intermediaries often suffered from financial risk.

The use of the barter system becomes more difficult as the means of production of widely needed goods become specialized. For example, if hyperinflation took place and money were to be severely devalued in the United States, most people would have little of value to trade for essentials such as food (since the farmer can only use so many cars, etc.).

Swapping is an increasingly prevalent form of the bartering system, which is more informal in nature than that of formal barter exchange organizations. These informal bartering systems allow people, usually through internet communities, to trade items of comparable value on a trust basis. Informal swapping generally does not require membership fees and traders are not matched by the site to other potential traders. Rather, they must find their own trading match through listings on the websites. Communities that participate in swapping include sites for swapping fashion, books, videos, games, music, and online trading for kids and teenagers. Interestingly, though, some of these sites have developed a form of "currency" that can be exchanged for goods on the site, such as "swapits."[1]

While swapping is an excellent way to find and obtain items that are inexpensive, it is reliant upon honesty. On occasion, a person may find that they have sent their part of the swap, but the recipient does not complete the transaction.

In finance, the word "barter" is used when two corporations trade with each other using non-money financial assets (such as U.S. Treasury bills). Alternatively, the standard definitions of money could be seen as being too narrow and needing to be expanded to increase near-money assets.

The Future of Bartering

Bartering future runs along side the development of internet-based technology and rapid globalization. The internet portal has catapulted the once primitive barter system into a global form of trade, which has been increasingly viewed as the “massive barter economy.”

Internet based barter sites have allowed not only individuals, but also businesses and organizations, to connect on a global scale, breaking down any previous boundaries that may have prevented trade. This new form of internet or “cyber” bartering is more developed than the traditional bartering system, as it does provide for a commonly accepted unit of account or “trade credit.” Trade credits hold the future to global bartering, as they help to eliminate the necessity for smaller international businesses to produce the otherwise most commonly accepted method of payment for goods and services, U.S. dollars. It has been argued by the growing global barter community, that future advances in technology will enable the current system of "money" to be replaced with an advanced bartering scheme.

Such elimination of money or currency through bartering may have its advantages. Nevertheless, given the complexities of human society, and the reliance of government on money to provide services to support society as a whole (as well as itself), it appears that barter alone can never suffice.

Human society developed exchange beyond direct barter as it grew in complexity and sophistication. Problems associated with these developments are not the result of the external changes, but due to the self-centered motivations of people. Thus, money itself, or even the love of money, is not the root of all evil, but rather the fact that the internal nature of human beings has contained evil. The solution to this problem, and the establishment of true human societies allowing advances in all areas of life, depends on solving the root cause of human suffering. In the transition era, however, the re-emergence of barter as a means of exchange that breaks down barriers between societies has some merit. The challenge for governments is to develop monetary systems or currencies, such as the Euro, which also transcend national boundaries while continuing support for the social structures that are dependent on the monetary system.