This article is about a type of container. 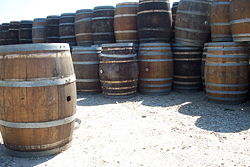 A barrel or cask is a hollow cylindrical container, traditionally made of wood staves and bound with iron hoops. Its top and bottom are circular and flat, and usually equal in diameter. Someone who makes such (wooden, iron-bound) barrels is known as a cooper. Contemporary barrels are made of aluminum and plastic as well. 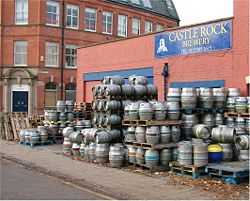 The term barrel is also used for the volume that a barrel of a standard size can hold. In the U.S. Customary System, this volume varies from 31 to 42 gallons (120 to 159 liters).

In ancient Europe, liquids such as oil and wine were carried in vessels, for instance amphora, sealed with pine resin. The Romans began to use barrels in the third century C.E., as a result of their commercial and military contacts with the Gauls, who had been making barrels for several centuries.

For nearly 2,000 years, barrels were the most convenient form of shipping or storage container for those who could afford the superior price. A large variety of bulk goods, from nails to gold coins, were stored in them. Bags and most crates were cheaper, but they were not as sturdy, and they were more difficult to manhandle for the same weight. Barrels slowly lost their importance in the twentieth century, with the introduction of pallet-based logistics and containerization.

In the mid-twentieth century, 55-gallon steel drums began to be used for the storage and transport of fluids such as water, oils, and hazardous waste. Empty drums occasionally became musical instruments in a steel pan band.

Barrels often have a convex shape, bulging at the middle. This constant bulge makes it relatively easy to roll a well-built wooden barrel on its side, changing directions with little friction. It also helps to distribute stress evenly in the material by making the container more spherical.

Casks used for ale or beer have shives, spiles and keystones in their openings.

The "chine hoop" is the iron hoop nearest the end of a wooden barrel, the "bilge hoops" those nearest the bulge, or center.

The stopper used to seal the hole in a barrel is called the bung.

Barrels are used for the storage of liquids, from simple water to wine. In addition, they may be used to age whiskey and wine, notably brandy, sherry and port wine. Also, explorers traveling by ship used barrels to store food, water, and wine.

For storage of water Water barrels are often used to collect the rainwater from dwellings (so that it may be used for irrigation or other purposes). This usage, known as rainwater harvesting requires (besides a large rainwater barrel), an adequate (water-proof) roof-covering and an adequate rain pipe.

For storage of oil

The standard barrel of crude oil or other petroleum product (abbreviated bbl) is 42 U.S. gallons (34.972 Imperial gallons or 158.987 L). This measurement originated in the early Pennsylvania oil fields, and permitted both British and American merchants to refer to the same unit, based on the old English wine measure, the tierce.

Oil has not actually been shipped in barrels[1] since the introduction of oil tankers, but the 4.2.-US-gallon size is still used as a unit for measurement, pricing, and in tax and regulatory codes. Each barrel is refined into about 25 gallons of gasoline, the rest becoming other products such as jet fuel and heating oil, using fractional distillation.[2]

For aging of beverages

Some wine is fermented "in barrel," as opposed to a neutral container such as a steel or concrete tank. Wine can also be fermented in large wooden tanks, often called "open-tops" because they are open to the atmosphere. Other wooden cooperage for storing wine or spirits are called "casks," and they are large (up to thousands of gallons) with either elliptical or round heads.

Pre-1824 definitions continued to be used in the US, the wine gallon of 231 cubic inches being the standard gallon for liquids (the corn gallon of 268.8 cubic inches for solids). In Britain that gallon was replaced by the Imperial gallon. The tierce later became the petrol barrel. The tun was originally 256 gallons, which explains where the quarter, 8 bushels or 64 (wine) gallons, comes from.

Although it is common to refer to draught beer containers of any size as barrels, in the UK this is strictly correct only if the container holds 36 imperial gallons. The terms "keg" and "cask" refer to containers of any size, the distinction being that kegs are used for beers intended to be served using external gas cylinders. Cask ales undergo part of their fermentation process in their containers, called casks.

Casks are available in several sizes, and it is common to refer to "a firkin" or "a kil" (kilderkin) instead of a cask.

In the United States, the term "keg" commonly means a "half barrel" size container.

Sizes for U.S. beer and ale

Other uses of the term "barrel"

Given the traditional barrel's distinctive shape and method of construction, the term barrel has been used to describe a variety of other related or similar objects, such as the gun barrel and barrel organ. It appears that the "gun barrel" got its name because early cannon were built from staves of metal hooped together, similar to a barrel.[6]

The English idiom over a barrel means to be in a predicament or helpless in a situation where others are in control: "I have no choice in the matter—my creditors have me over a barrel." The phrase is said to have originated from two nineteenth century practices: Rolling drowning victims over a barrel to clear their lungs of water, or flogging someone who is bent over a barrel.

Retrieved from https://www.newworldencyclopedia.org/p/index.php?title=Barrel&oldid=1062434
Categories:
Hidden category:
This page was last edited on 1 January 2022, at 02:42.
Content is available under Creative Commons Attribution/Share-Alike License; additional terms may apply. See Terms of Use for details.