Barracuda is the common name for the various marine, ray-finned fish comprising the family Sphyraenidae of the order Perciformes, characterized by a long, fairly compressed, elongated body covered with small, smooth scales and with a large mouth with strong, fang-like teeth. They are notable for their long size, reaching up to six feet (two meters) or more in length. There is only one genus of barracudas, Sphraena, which has about 20 species (Nelson 1994).

Despite an unfavorable reputation as dangerous to humans who are scuba diving, snorkeling, or swimming in their waters, unprovoked attacks by barracudas on humans are rare. Rather, barracudas generally add value to human life as food and game fish and for the wonder they add to nature. Ecologically, they are integral to many marine food chains, serving as the top predator in some tropical and subtropical waters and helping to maintain the balance of nature. 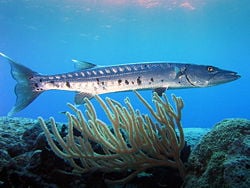 Great barracuda hovering in the current at the Paradise Reef, Cozumel, Mexico.

Barracudas have an elongate body and large mouth, with the lower jaw jutting out beyond the upper (Nelson 1994). Their strong, fang-like teeth are unequal in size and set in sockets in the jaws on the roof of the mouth. The head is quite large, pointed, and pike-like in appearance. The gill-covers do not have spines and are covered with small scales. The two dorsal fins are widely separated, with the first having five spines and the second having one spine and nine soft rays (Nelson 1994). The second dorsal fin and anal fin are the same size and are situated on the top and bottom of the barracuda, equidistant from the tail. The lateral line is prominent and extends straight from head to tail. The spinous dorsal fin is placed above the pelvics. The hind end of the caudal fin is forked or concave. It is set at the end of a stout peduncle. The pectoral fins are placed low down on the sides. The barracuda also has a large swim bladder.

Nelson (1994) reports that the maximum length of barracudas is normally to 1.8 meters (almost 6 feet), but are said to reach somewhat longer lengths. Only some species of barracuda grow to a large size. The species that do are the European barracuda, barracouta or spet (S. sphyraena), found in the Mediterranean and eastern Atlantic; the great barracuda, picuda, or becuna (S. picuda), ranging on the Atlantic coast of tropical America from Florida to Brazil and reaching the Bermudas; the California barracuda (S. argentea), extending from Puget Sound southwards to Cabo San Lucas; the Indian barracuda (S. jello) and the black-finned or Commerson's barracuda (S. commersoni), both from the seas of India and the Malay Peninsula and Archipelago.

Barracudas typically have coloration that is dark green or gray above a chalky-white underbelly. Sometimes there is a row of darker cross-bars or black spots on each side. The fins may be yellowish or dusky.

Barracudas occur both singly and in schools around reefs, but also appear in open seas. Swimming in schools, or individually, they are voracious predators and hunt using a classic example of lie-in-wait or ambush. They rely on surprise and short bursts of speed (up to 27 mph or 43 km/h) to overrun their prey, sacrificing maneuverability (RQCSR 2007). They also exhibit some scavenger-like feeding habits.

The larger barracudas are more or less solitary in their habits. Young and half-grown fish frequently congregate in shoals. Their food is composed of fish of all types. Large barracudas, when gorged, may attempt to herd a shoal of prey fish in shallow water, where they guard over them until they are ready for another meal. Scuba diver inside a school of sawtooth barracudas in Koh Tao, Thailand.

Like sharks, barracudas have long had a bad reputation as being dangerous to humans. However, unprovoked attacks on humans are extremely rare and millions of scuba divers, snorkelers, and swimmers spend time with them in the water without any incidents. Barracudas sometimes do follow snorkelers and scuba divers across a reef, which can make one feel uncomfortable, but they are harmless unless provoked. Because barracudas have a scavenger-like tendency, it has been theorized that barracudas tend to follow snorkelers because they believe that the snorkelers might be large predators and if they were to capture prey it would be easy for the barracudas to scavenge whatever may be left behind.

Being formidable hunters, they should be respected, as barracudas are perfectly capable of defending themselves against humans that harass them. Handfeeding or trying to touch them is strongly discouraged. Spearfishing around barracudas can also be quite dangerous, as they are strongly attracted by the wounded fish.

There have been isolated cases where barracudas did bite a human, but these incidents are rare and are believed to be caused by bad visibility. Barracudas will stop after the first bite as humans are not their normal food source.

Barracudas are prize fish, and can be caught either fly or sea fishing. They are extremely powerful, and require tough and strong rods.

Barracudas are caught as food and game fish. They are most often eaten as fillet or steak and have a strong taste like tuna or salmon. Larger species, like the great barracuda, have in some areas been implicated in cases of ciguatera food poisoning (USFDA 2007).

In southern Nigeria, West Africa they are smoked and used in the preparation of different soups. Barracuda meat is smoked is because when cooked fresh, the fish is quite soft and disintegrates in the soup. 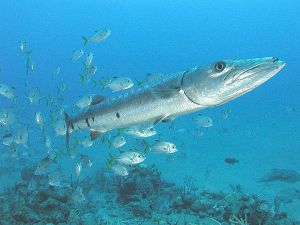 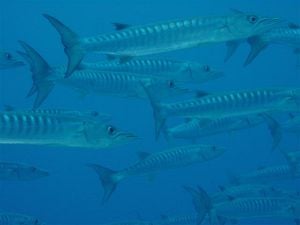 A school of sawtooth barracudas, Sphyraena putnamae in Bora Bora. 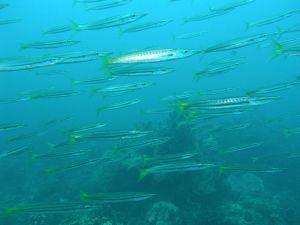 A school of yellowtail barracudas, Sphyraena flavicauda off Dayang, Malaysia.

There are 26 known species:

Retrieved from https://www.newworldencyclopedia.org/p/index.php?title=Barracuda&oldid=1062433
Categories:
Hidden category:
This page was last edited on 1 January 2022, at 02:41.
Content is available under Creative Commons Attribution/Share-Alike License; additional terms may apply. See Terms of Use for details.