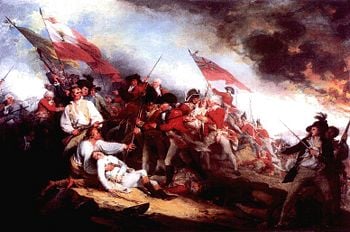 The death of General Warren at the Battle of Bunker Hill on June 17, 1775 by John Trumbull

Dr. Joseph Warren (June 11, 1741 – June 17, 1775) was an American patriot who died a hero's death in the American Revolutionary War. A doctor and soldier, Warren is remembered for his leading role in Patriot organizations in Boston and serving as chief executive of the revolutionary Massachusetts government, but most of all for his death as a volunteer private soldier—a rank he insisted on taking while his appointment to the office of General was pending—during the Battle of Bunker Hill.

Born in Roxbury, Massachusetts, Warren pursued medical studies at Harvard, later becoming a teacher and then a doctor. An active member of the Sons of Liberty, he began associating with pro-independence leaders and advocating resistance to the British, and attained the highest position in the revolutionary government.

After the 1770 Boston Massacre, Warren was a member of the committee informing the colonial governor that British troops must be recalled, and who dispatched Paul Revere, William Dawes, and Samuel Prescott on their famous 1775 ride. He fought at Bunker Hill and was killed while rallying retreating militia. He is remembered as a hero and early martyr of the cause of the American Revolution.

Warren was born in Roxbury, Massachusetts, to Joseph Warren and Mary (Stevens) Warren. His father was a respected farmer who was killed instantly in October 1755 when he fell off a ladder while gathering fruit in his orchard. After attending the Roxbury Latin School, he studied medicine at Harvard University, graduating in 1759, and then teaching for a time at the Roxbury Latin School. He married 18-year-old heiress, Elizabeth Hooten on September 6, 1764. She died in 1772, leaving him with four children.

While practicing medicine and surgery in Boston, Warren joined the Freemasons and eventually was appointed as a Grand Master. He became involved in politics, associating with John Hancock, Samuel Adams, and other pro-independence leaders. He became active in the Sons of Liberty, and was appointed chairman of the Massachusetts Committee of Correspondence. He drafted the Suffolk Resolves, which were endorsed by the Continental Congress, to advocate resistance to the British. He was then appointed president of the Massachusetts Provincial Congress, the highest position in the revolutionary government.

After receiving intelligence about British troop movements, Warren sent William Dawes and Paul Revere on their famous "midnight rides" on April 18, 1775, to warn Lexington and Concord of British raids. Several historians believe that his source for this information was Margaret Gage, the wife of General Thomas Gage, commander in chief of the North American forces from 1763 to 1775. During the Battle of Lexington and Concord on April 19, Warren coordinated and led militia into the fight alongside American military leader William Heath as the British Army returned to Boston. Warren also played an important role in recruiting and organizing soldiers during the Siege of Boston. 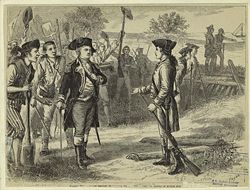 Warren was appointed a major general by the Massachusetts Provincial Congress on June 14, 1775. However, his commission had not yet taken effect three days later when the Battle of Bunker Hill was fought. As a result, he served as a volunteer private, against the wishes of General Israel Putnam and Colonel William Prescott, who requested that he serve as their commander. He fought in the front lines, rallying his troops to the third and final assault of the battle when he was killed by a musket ball fired into his head by a British officer who recognized him.

British Captain Walter Laurie, who had been defeated at Old North Bridge, later said he "stuffed the scoundrel with another rebel into one hole, and there he and his seditious principles may remain." Warren's body was exhumed ten months after his death by his brothers and Paul Revere, who identified the remains by the artificial teeth in its jaw. This may be the first recorded instance of postmortem identification by forensic odontology. His body was placed in Granary Burying Ground and later (in 1825) in St. Paul's Cathedral, before finally being moved in 1855 to his family's vault in Forest Hills Cemetery.

Warren's statue in front of the Roxbury Latin School

At the time of Warren's death, his children—Joseph Warren, H. C. Warren, Richard Warren, Elizabeth Warren, Mary Warren— were staying with Abigail Adams at John Quincy's birthplace in Quincy, Massachusetts. A cairn now marks the spot where his oldest daughter observed the battle from afar after word of her father's death. The Warren children were financially supported by Benedict Arnold, who later succeeded in obtaining support for them from the Continental Congress until they were of age.

Did you know?
Joseph Warren died during the Battle of Bunker Hill, fighting in the front lines for the American Revolution

John Warren, Joseph's younger brother, served as a surgeon during the Battle of Bunker Hill and the rest of the war and then later founded Harvard Medical School.

British commander-in-chief General Thomas Gage is said to have called Warren's death of equal value to the death of 500 men, but his death strengthened the Revolution's political position because it was viewed by many Americans at the time as an act of national martyrdom. Fourteen states have a Warren County named after Joseph Warren. Towns such as Warren, New Jersey, Warrenton, Virginia, Warren, Pennsylvania, and Warren, Massachusetts are also named in his honor. Boston's Fort Warren, started in 1833, was named in his honor. Five ships in the Continental Navy and United States Navy were named Warren after Joseph Warren.

There are three statues of Warren on public display. Two are located in Boston—one in the exhibit lodge adjacent to the Bunker Hill Monument, and the other on the grounds of the Roxbury Latin School; the third is in the General Joseph Warren Park in Warren, Pennsylvania.

Retrieved from https://www.newworldencyclopedia.org/p/index.php?title=Joseph_Warren&oldid=1076114
Categories:
Hidden category:
This page was last edited on 11 August 2022, at 02:10.
Content is available under Creative Commons Attribution/Share-Alike License; additional terms may apply. See Terms of Use for details.