The Battle of Buena Vista (February 23, 1847), also known as the Battle of Angostura, in February 1847 saw the U.S. Army use heavy artillery to repulse the much larger Mexican army in the Mexican-American War. Buena Vista, Coahuila is seven miles (12 km) south of Saltillo, in northern Mexico. The War would not end until the following year with the Treaty of Hildago Guadalupe but this was one battle that contributed to the American victory. The most important consequence of the war would be what was known as the Mexican Cession, in which all the Mexican territories from California to southwestern Wyoming, west of Texas along the Rio Grande River and south of the forty–second parallel were ceded to the United States. Mexico risked being completely annexed, although this did not happen. New territory was thus opened up for settlement, to be eventually incorporated into as new states within the Union. No one then knew how greatly the developing U.S. economy and industrialization would gain from the acquisition of Texas, whose oil reserves helped to make America the world's largest petroleum producing country (71 percent of the world's production in 1925). While the United States did not maintain this position, its economic and industrial history would have been different if the American Mexican War ended had differently.

After the Battle of Monterrey in September 1846, most of Major General Zachary Taylor's Army of Occupation was sent to the gulf coast to become the bulk of Winfield Scott's expedition against Mexico City. Taylor felt that President James K. Polk was attempting to deprive him of any further military success which would aid in his campaign for the presidency. Taylor decided to ignore orders to stay in Monterrey; he marched deeper into Mexico and seized Saltillo. Taylor also diverted the Center Division, under John E. Wool, from its expedition in Chihuahua to join him in Saltillo. With Wool's division, the U.S. force totaled about 4,500 soldiers, most of them volunteer units fighting for the first time.

In the summer of 1846, Antonio López de Santa Anna returned from exile and quickly seized power. When Monterrey had fallen, Santa Anna raised an army in San Luis Potosi numbering almost 25,000. When a letter from General Scott to Taylor telling of the transfer of the bulk of Taylor's army to the Gulf fell into Mexican hands, Santa Anna quickly marched north to try and knock Taylor out of Mexico while U.S. forces were being withdrawn (Chidsey 1968, 112-113).

Taylor learned that Santa Anna was marching north and so he moved about nineteen miles south of Saltillo to Agua Nueva. Taylor sent out Major Ben McCulloch, of the Texas Rangers, to scout out the Mexican Army. McCulloch found Santa Anna 60 miles (100 km) to the south, informing Taylor on February 21. Taylor withdrew to a mountain pass at Buena Vista twelve miles north of Agua Nueva. General Wool was charged with laying out the defenses. Later that day Santa Anna arrived at Agua Nueva with 12,000 men, his force diminished because of desertion and exhaustion during the long trek from San Luis Potosi. Santa Anna perceived the U.S. withdrawal to Buena Vista as a retreat and demanded a surrender. Taylor's aide, William Wallace Smith Bliss, eloquently replied that the U.S forces declined the surrender. Taylor, worried about the safety of his supplies, rode to Saltillo that night to ensure the protection of his rear (Chidsey 1968, 114-115).

On the morning of February 23, General Pedro de Ampudia attacked the U.S. left flank guarded by the second Indiana from Joseph Lane's Indiana Brigade. The volunteers were supported by a battery of artillery but were steadily driven back along with a second line of Illinois volunteers. Wool sent a messenger to General Lane to hold the line at all costs. The Illinois volunteers managed to conduct a fighting withdrawal under the pressure of the Mexican attack.

General Taylor returned to the field and made his presence known to his men; he was escorted by the Mississippi Rifles under Colonel Jefferson Davis. The Mississippians hit the flank of Ampudia's attacking column and Davis was wounded in the foot. Meanwhile Wool rallied the broken regiments using the walls of the hacienda at Buena Vista as a defensive position supported by a battery under Thomas W. Sherman and two regiments of dragoons. The third Indiana was brought to the support of Davis, and the two regiments formed an inverted V. The Mexicans attacked this new line. The Hoosiers and Mississippians held their fire so long that the confused attackers paused briefly and were then hit by a wave of gunfire. About 2,000 Mexicans were pinned down. A young Mexican lieutenant attempted to trick the U.S. into a cease fire by saying that Santa Anna wished to meet with the U.S. commander. Taylor and Wool saw through the ploy, but it did buy the trapped Mexicans enough time to escape. 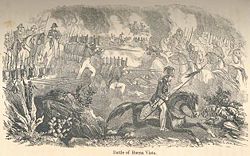 American depiction of the fighting. 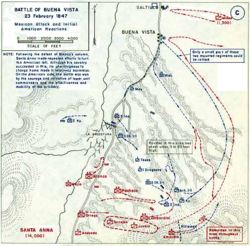 Map of the Battle of Buena Vista

Santa Anna renewed an attack on the main U.S. position led by General Francisco Pérez with artillery support. An artillery battery under Braxton Bragg unlimbered with orders to maintain his position at all costs. Taylor rode over to Captain Bragg, and after a brief conversation in which Bragg replied he was using single shot, Taylor ordered "double-shot your guns and give them hell, Bragg" (Chidsey 1968, 117). Later this order, although misquoted as "give them a little more grape Captain Bragg," would be used as a campaign slogan which carried Taylor into the White House. Pérez's attack was repulsed as heavy rain fell over the field. During the night Santa Anna declared victory and withdrew to Agua Nueva, after receiving a letter from Mexico City declaring that Santa Anna was needed to quell a Political Coup (Chidsey, 1968, 118).

The Americans racked up nearly 750 casualties, including 267 killed. Mexican casualties are unknown, but are presumed to have been far higher since they had remained on the offensive throughout the battle. The Mexican Army did leave behind over 500 dead soldiers on the battlefield.

The battle was the last major battle in northern Mexico. It was Taylor's greatest battle of the war and also his last; he returned to the U.S. to pursue his political career. His success at Buena Vista and his legendary command to Captain Bragg helped him win election as President of the United States in 1848. Santa Anna suffered great losses and withdrew to the south when on the verge of victory. His withdrawal was spurred on by Political Dissent in Mexico City. He was later forced to defend Mexico City against an army under Winfield Scott.

Numerous heroes emerged from the battle, but in the end it was a long and bloody engagement that had yielded little in terms of strategic gain for either army. Both retained relatively the same positions that they had occupied prior to the conflict.

Buena Vista County, Iowa, in 1859, was named in honor of the battle, as was Buena Vista Township, in Michigan's Saginaw County, as was the city of Buena Vista, Virginia.