James Monroe (April 28, 1758 – July 4, 1831) was a member of the U.S. Continental Congress, minister to France and Great Britain, governor of Virginia, U.S. senator, secretary of state, and fifth president of the United States. He was the last chief executive to personally fight for independence from Britain during the Revolutionary War.

Monroe was a popular president who ran unopposed for a second term in 1820. With the opposition Federalist Party effectively moribund, the eight years of Monroe's administration (1817-1825) were called the Era of Good Feeling. He was also the last American president of the “Virginia Dynasty”—of the first five U.S. presidents, four were born and lived in Virginia.

As president, Monroe consistently and successfully pursued a policy that served both to protect the United States from European interference and to foster unhampered growth of the nation and its economy. He was responsible for the promulgation of the Monroe Doctrine, a major tenet of U.S. foreign policy asserting that the United States would not tolerate new colonies or interference by outside powers in the internal affairs of nations in the Western hemisphere. The 1820 Missouri Compromise addressed the contentious issue of slavery in newly admitted western states, but merely delayed the resolution of the issue of slavery until the U.S. Civil War in 1861-1865.

Monroe was a patriot of whom Jefferson reportedly said, "[He] was so honest that if you turned his soul inside out there would not be a spot on it."[1] Like his predecessors in the nation's highest office, Monroe also acknowledged the Creator with respect to America's rising fortunes: "When we view the great blessing with which our country has been favored, those which we now enjoy, and the means which we posses of handling them down unimpaired to our latest posterity, our attention is irresistibly down to the source from whence they flow. Let us, then, unite in offering our most grateful acknowledgments for those blessing to the Divine Author of All Good."

Born in Westmoreland County, Virginia, Monroe went to school at Campbelltown Academy and then the College of William and Mary, both in Virginia. Monroe's father, Spence Monroe, was a woodworker and tobacco farmer and mother Elizabeth Jones Monroe had significant land holdings, but little money. After graduating from William and Mary in 1776, Monroe fought in the Continental Army, serving with distinction at the Battle of Trenton, where he was shot in his left shoulder. Following his military service, he practiced law in Fredericksburg, Virginia. Monroe married Elizabeth Kortright on February 16, 1786, at the Trinity Church in New York.

Monroe was elected to the Virginia House of Delegates in 1782 and served in the Continental Congress (1783–1786). As a youthful politician, he joined the anti-Federalists in the Virginia Convention which ratified the Constitution, and in 1790, was elected United States Senator. As Minister to France in 1794–1796, he displayed strong sympathies for the French Revolution; later, with Robert R. Livingston and under the direction of President Thomas Jefferson, he helped negotiate the Louisiana Purchase.

Following the War of 1812, Monroe was elected president in the election of 1816, and re-elected in 1820. In both those elections Monroe ran nearly uncontested.

Attentive to detail, well prepared on most issues, non-partisan in spirit, and above all pragmatic, Monroe managed his presidential duties well. He made strong cabinet choices, naming a southerner, John C. Calhoun, as secretary of war, and a northerner, John Quincy Adams, as secretary of state. Only Henry Clay's refusal kept Monroe from adding an outstanding westerner. Most appointments went to deserving Republicans, but he did not try to use them to build the party's base. Indeed, he allowed the base to decay, which reduced tensions and led to the naming of his era as the "Era of Good Feeling."

To build goodwill, he made two long tours in 1817. Frequent stops allowed innumerable ceremonies of welcome and good will. The Federalist Party dwindled and eventually died out, starting with the Hartford Convention. Practically every politician belonged to the Democratic-Republican Party, but the party lost its vitality and organizational integrity. The party's Congressional caucus stopped meeting, and there were no national conventions.

Monroe's greatest achievements as president lay in foreign affairs. Ably supported by Adams, he made substantial territorial additions and gave American policy a distinctly national orientation. Monroe welcomed an opportunity to press Spain to cede Florida and define the boundaries of Louisiana. His chance came when General Andrew Jackson invaded Florida in 1818. In pursuit of hostile Indians, Jackson seized the posts of St. Marks and Pensacola, acts that many persons regarded as violations of congressional war powers. In the cabinet, Adams, an expansionist, urged Jackson's complete vindication, while Crawford and Calhoun demanded that he be reprimanded for exceeding his instructions.

Monroe chose a middle course—the posts were restored to Spain, but the administration accepted Jackson's explanation that his action had been justified by conditions in Florida. The incident led Spain to cede Florida and define, favorably to American claims, the boundary of the Louisiana Purchase in the Adams-Onís Treaty negotiated in 1819.

The Missouri Compromise, also called the Compromise of 1820, was an agreement passed in 1820 between the pro-slavery and anti-slavery factions in the United States, involving primarily the regulation of slavery in the western territories. It prohibited slavery for all new states north of the 36°30' line, or the border of the Arkansas territory (excluding Missouri). Prior to the agreement, the House of Representatives had refused to accept this boundary and a conference committee was appointed. The United States Senate refused to concur in the amendment, and the whole measure was lost.

During the following session (1819-1820), the House passed a similar bill with an amendment introduced on January 26, 1820 by John W. Taylor of New York allowing Missouri into the union as a slave state. In the meantime, the question had been complicated by the admission in December of Alabama, a slave state (the number of slave and free states now becoming equal), and by the passage through the House (January 3, 1820) of a bill to admit Maine as a free state.

The Senate decided to connect the two measures, and passed a bill for the admission of Maine with an amendment enabling the people of Missouri to form a state constitution. Before the bill was returned to the House, a second amendment was adopted on the motion of Jesse B. Thomas of Illinois, excluding slavery from the Missouri Territory north of 36°30' (the southern boundary of Missouri), except within the limits of the proposed state of Missouri. The House of Representatives refused to accept this and a conference committee was appointed.

The doctrine was issued by Monroe during his seventh annual State of the Union address to Congress. It was met first with doubt, then with enthusiasm. This was a defining moment in the foreign policy of the United States.

The Monroe Doctrine states three major ideas, with one more added by President Theodore Roosevelt. First, it conveys that European countries cannot colonize in any of the Americas: North, Central, or South. Second, it advances George Washington's foreign policy of noninterference in European affairs if America's interests are not involved. Third, the U.S. will consider any attempt at colonization a threat to its national security. Roosevelt added to the doctrine, and summed up his additions with the statement, "Speak softly and carry a big stick." 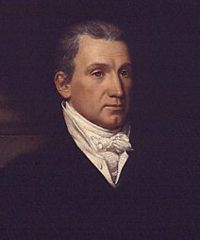 Monroe appointed the following Justice to the Supreme Court of the United States:

Upon leaving the White House after his presidency, James Monroe moved to live at Monroe Hill on the grounds of the University of Virginia. This university's modern campus was originally Monroe's family farm from 1788 to 1817, but he had sold it to the new college in the first year of his presidency. He served on the Board of Visitors under Jefferson and then under the second rector and another former President James Madison, until his death.

Monroe had racked up debts during his years of public life. As a result, he was forced to sell off his Highland Plantation. Today, it is owned by the College of William and Mary, which has opened it to the public. He never recovered from his financial troubles, and his wife's poor health made matters worse. As a result, he and his wife lived in Oak Hill until Elizabeth's death on September 23, 1830.

Following his wife Elizabeth's death, Monroe moved to live with his daughter Maria Hester Monroe Gouverneur in New York City and died there from heart failure and tuberculosis on July 4, 1831, 55 years after the U.S. Declaration of Independence was proclaimed and five years after the death of presidents John Adams and Thomas Jefferson. He was originally buried in New York, but he was re-interred in 1858 to the President's Circle at Hollywood Cemetery in Richmond, Virginia.

Retrieved from https://www.newworldencyclopedia.org/p/index.php?title=James_Monroe&oldid=1067291
Categories:
Hidden category:
This page was last edited on 12 April 2022, at 16:27.
Content is available under Creative Commons Attribution/Share-Alike License; additional terms may apply. See Terms of Use for details.