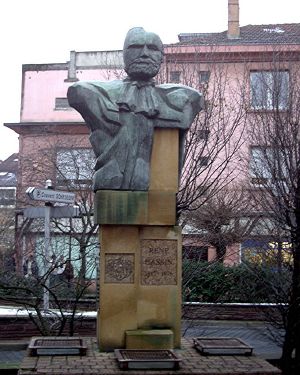 Memorial for Cassin in Forbach, France

René Samuel Cassin (October 5, 1887 – February 20, 1976) was a French jurist and judge. He received the Nobel Peace Prize in 1968, for his work in drafting the Universal Declaration of Human Rights, adopted by the United Nations General Assembly on December 10, 1948. That same year, he was also awarded one of the UN's own Human Rights Prizes.

In addition to his intimate involvement in producing the UDHR, Cassin worked in France on behalf of disabled war veterans and war orphans and promoted education and French culture internationally. He believed that at its root, World War II was caused by a fundamental disregard for human rights, so that protecting these was absolutely necessary if the world was to become a safer, more peaceful place.

BoCassin was born in Bayonne, in the south of France, into a family of French Jewish merchants. He attended University of Aix-en-Provence, graduating in 1908, with degrees in the humanities and in law. He then achieved first place in the examination to qualify as a lawyer and his doctorate in 1914, in law, politics, and economics. He began his legal career in Paris, in 1909, as counsel at the Paris Court. During World War I, he was drafted into the army and was seriously wounded by German fire. He was lucky to survive. His own mother happened to be a nurse in the hospital to which he was taken. She persuaded reluctant surgeons to operate on her son. Following his discharge, became a Professor of Law at the University of Aix-en-Provence, and later moved to Lille (1920) and then to the University of Paris, in 1929. He remained there until his retirement from teaching in 1960.

Cassin made a major scholarly contribution in the fields of equal rights for women, human rights, and inheritance law, as well as in several areas of civil and contract law. He lectured widely, visiting Africa, the Middle East and the Far East and also teaching at such institutions as the French National School of Overseas Territories, the Academy of International Law at The Hague, and the University Institute of Advanced International Studies in Geneva.

His interest and expertise in international law resulted in his appointment as France's delegate to the League of Nations from 1924 to 1938, where he pressed for progress on disarmament and in developing institutions to aid the resolution of international conflicts. In 1921, Cassin played a key role in the creation of the International Labor Organization.

At the outbreak of the Second World War, Cassin was one of the first Frenchmen to join General de Gaulle and the French government-in-exile in London, holding various ministerial portfolios and becoming one of de Gaulle's closest advisers. René Cassin was member of the central committee of the Human Rights League (LDH) during the Vichy period. The most important post that Cassin held during World War Two was minister for education. After the war, he continued to serve as president of the Council of the National School of Administration (Conseil de l'école nationale d'administration) and in 1960, became president of the French National Overseas Center of Advanced Studies (Centre national des hautes-études de la France d'outre-mer). From 1943 until 1945, he was also a member of the Permanent Conference of Allied Ministers of Education in which capacity he was eager to promote French culture and language internationally. Between 1944 and 1960, Cassin was vice-president of the Council of State. This is the body that has ultimate authority in legal cases dealing with personnel and administrative matters. He served ten years as a member of the Constitutional Council, which scrutinized French legislation and ensured that it conforms with the constitution. From 1950 until 1960, he presided over the Court of Arbitration at The Hague. From a 1959 until 1965, he was a member of the European Court of Human Rights at Strasbourg, then president 1965-1968. Today the court building is on the Rue René Cassin in Strasbourg.

Cassin was very active within his field, and presided over several significant bodies. These included the French branch of the World Federation of Democratic Jurists (1949), the Society of Comparative Legislation (1952-1956), the International Institute of Administrative Sciences (1953-1956), the International Institute of Diplomatic Studies and Research (1956), and the French Association for the Development of International Law (1962-1967). He founded the French Disabled Veterans Association (1918) and, in 1926, the International Conference of Assocaitions of Disabled War Veterans. He also worked to support children who had been orphaned during the war. As plans develped to repalce the League of Nations with the United Nations and the proposal for a Universal Declaration of Human Rights emerged, Cassin was ideally placed to represent France at the deliberations, chaired by Eleanor Roosevelt.

In 1945, Charles de Gaulle suggested to Cassin that, having done so much for the French people, he also do something to help the Jewish people. Cassin turned to the Alliance Israelite Universelle, and, together with the American Jewish Committee and the Anglo-Jewish Association, founded the Consultative Council of Jewish Organisations, dedicated to providing encouragement from a Jewish perspective to the nascent UN human rights system. In 2001, CCJO René Cassin was founded to promote Universal Human Right from a Jewish perspective.

Cassin became the principal drafter of the Universal Declaration of Human Rights. Working from a draft composed by Canadian scholar and professor of law, John Humphries, he reduced the draft from 46 basic articles to 44. The Universal Declaration of Human Rights, as eventually adopted by the United Nations General Assembly on December 10, contained 30 human rights articles from the original draft. He then served on the UN's United Nations Commission on Human Rights. Writing in 1968, to mark the International Human Rights Year of 1968, Cassin warned the world: "Now that we possess an instrument capable of lifting or easing the burden of oppression and injustice in the world, we must learn to use it".[1]. That year, Cassin was awarded the Nobel Peace Prize. His Nobel Biography describes him as, "one of the world's foremost proponents of the legal as well as the moral recognition of the rights of man." "Neither a pessimist nor an optimist," the biography continues, Cassin says that "men are not always good" yet "based much of his life's work on the premise that human responses can be constructive if states will transform the conditions that breed ill will into those that recognize the dignity of man."[2] The last individual recipient of the prize had been Martin Luther King, Jr.

In presenting the Prize, Mrs. Aase Lionaes stressed that it was being awarded to Professor Cassin because of his "respect for human worth, irrespective of nationality, race, religion, sex, or social position, which" had animated "Professor Cassin's life and work. It is primarily for his contribution to the protection of human worth and the rights of man, as set forth in the Universal Declaration of Human Rights, that the Nobel Committee of the Norwegian Parliament today awards the Nobel Peace Prize to Réne Cassin," she continued.[3]. In his Nobel Lecture, Cassin spoke about how as a child he had been moved by acts of civic courage, as well as by the injustice of the Dreyfus Affair. His World War experiences convinced him that people had a right to be compensated for injury caused them in the "service of the national community." It was the horrors of World War II that convinced him that without an international consensus on fundamental human rightd, peace would remain a dream. The Nazi regime was nothing but an "immense machine geared for the destruction of human liberty and dignity," thus "the Second World War constituted a genuine 'crusade for human rights'." He continued:

By its very existence this Declaration, which was thereafter called "Universal" and which does not have a juridically obligatory character, constituted a historical event of the first magnitude. It is the first document of an ethical sort that organized humanity has ever adopted, and precisely at a time when man's power over nature became vastly increased because of scientific discoveries and when it was essential to decide to what constructive ends these powers should be put. Its moral and political repercussions have been considerable.

Cassin's legacy is represented by the organization named for him, but most powerfully by the Declaration he did so much to produce. For many people, the publication of the UDHR marks a milestone in human history, the almost universal recognition of rights that should never be violated. Many aspects of the UDHR have been incorporated into the law of European nations. Increasingly, the international community is isolating those countries that abuse human rights as a method to enforce the articles of the Declaration, although it does not carry the force of law. Not all states have ratified the Declaration and some Muslims prefer the Universal Islamic Declaration of Human Rights[4] because that takes God's rights into account and speaks of human responsibility. However, almost all people around the world feel a sense of ownership of the UDHR, which represents common values and ideals.