The Dreyfus Affair was a political scandal which divided France during the 1890s and early 1900s. It involved the wrongful conviction of Jewish military officer Alfred Dreyfus (1859-1935) for treason. France had pioneered Jewish emancipation, granting of full civil rights in 1791. Jews could then join the army, enter the professions, and fully integrate, if they chose, into French society. Emancipation followed throughout Europe, always resisted but eventually granted, for example, by Germany in 1871, Great Britain in 1890 and Russia in 1917. As a result of emancipation, the progressive movement started among German Jews, who minimized the difference between synagogue worship and Protestant church services, and simplified Jewish law. The first progressive synagogue opened in Seesen, Westphalia in 1810. The Dreyfus Affair resulted in many Jews questioning whether anything, even assimilation, would prevent them from being the victims of discrimination, anti-semitism, and prejudice. The German Jews, by World War II were the most assimilated society anywhere, but this did not prevent Hitler from rounding up and murdering even those who were baptized Christians.

Following Dreyfus' conviction, the idea of an international Jewish conspiracy gathered more support, against which a Jewish Defense League had been formed as early as 1886. Hitler subscribed to this conspiracy theory. The Zionist movement can also be directly attributed to the Dreyfus Affair, since its founder, Theodor Herzl (1869-1904), had attended Dreyfus' trial, which convinced him that Jews would never be trusted, despite statutes for equal rights. The creation of the State of Israel can thus also be traced back to this incident. Many regard a homeland for the Jews as a just consequence for centuries of persecution, and especially for Hitler's "final solution" to what he saw as the Jewish problem. Queen Victoria called the affair, the "greatest disgrace to France which could take place."[1]

Captain Alfred Dreyfus was the highest-ranking Jewish artillery officer in the French army. He was charged with passing military secrets to the German Embassy in Paris, and in 1894 he was convicted of treason and imprisoned on the notorious Devil's Island. The conviction was based on documents which were found in the waste-paper basket of the German military attaché, Major Max von Schwartzkoppen, and which initially appeared to the French military authorities to implicate Dreyfus. Fearing that the sometimes anti-Semitic press would learn of the affair and accuse the French army of covering up for a Jewish officer, the French military command pushed for an early trial and conviction. By the time they realized that they had very little evidence against Dreyfus (and that what they had was not at all conclusive), it was already politically impossible to withdraw the prosecution without provoking a political scandal that would have brought down the French government. The subsequent court martial was notable for numerous errors of procedure (most notably, the defense was unaware of a secret dossier which the prosecution provided to the military judges).

The writer Émile Zola (1840-1902) is often thought to have exposed the affair to the general public in a famous open letter to President Félix Faure (1841-1899), to which the French statesman and journalist Georges Clemenceau (1841-1929) appended the eye-catching title "J'accuse !" (I Accuse!); it was published January 13, 1898, in the newspaper L'Aurore (The Dawn). In the words of historian Barbara Tuchman, it was "one of the great commotions of history." Zola in fact was a latecomer who did, however, bring world-wide attention and publicity to Dreyfus' unjust treatment. The real credit for exposing the flaws behind Dreyfus' conviction belongs to four others: Dreyfus' brother Mathieu, who fought a lonely campaign for several years; the journalist Bernard Lazard; a whistle-blower in the intelligence service—the Colonel Georges Picquart—and new head of the French statistics office who was ironically an anti-Semite himself but who wished to find the real traitor, Major Ferdinand Walsin Esterhazy (1847-1923), exposed;[2] and the politician Auguste Scheurer-Kestner (1833-1899), who brought the injustice to the attention of the French political class. 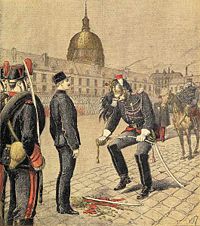 The dishonorable discharge of Dreyfus. Alfred Dreyfus was put on trial in 1894 and was accused of espionage, found guilty, and sentenced to life in prison on Devil's Island. In September of 1899, he was offered a pardon from the president of France, which he declined. It was not until 1906 that Dreyfus was exonerated of the charges and readmitted into the army. He was also made a knight in the Légion d'Honneur (Legion of Honor). Dreyfus was recommissioned to fight behind the lines of the Western Front during World War I as a Lieutenant-Colonel of Artillery though he did actually serve on the front-lines in 1917. He served his nation with distinction beyond his natural retirement age.[3]

The factions in the Dreyfus affair remained in place for decades afterward. The far right remained a potent force, as did the moderate liberals. The liberal victory played an important role in pushing the far right to the fringes of French politics. It also prompted legislation such as a 1905 enactment separating church and state. The coalition of partisan anti-Dreyfusards remained together, but turned to other causes. Groups like Maurras' Action Française that were created during the affair endured for decades. The right-wing Vichy regime (puppet of the Nazi state) was composed mostly of old anti-Dreyfusards or their descendants. It is now universally agreed that Dreyfus was innocent, but his statues and monuments are occasionally vandalized by far-right activists. The Dreyfus Affair was commented upon later by Hannah Arendt in her book, The Origins of Totalitarianism, claiming that the Affair was evident of a recurring theme of anti-semitism as she sought to identify the causes of such a crisis.

The Jewish-Austrian journalist Theodor Herzl was assigned to report on the trial and its aftermath. Soon afterward, Herzl wrote The Jewish State (1896) and founded the World Zionist Organization, which called for the creation of a Jewish State. For many years it was believed that the anti-Semitism and injustice revealed in supposedly enlightened France by the conviction of Dreyfus had a radicalizing effect on Herzl, showing him that Jews could never hope for fair treatment in European society, thus orienting him toward Zionism. Herzl himself promoted this view. However, in the past few decades it has been rejected by historians who have closely examined the chronology of events. They have shown that Herzl, like most contemporary observers, including Jews, initially believed Dreyfus' guilt. While eventually convinced of Dreyfus' innocence and indeed upset by French anti-Semitism beyond l'Affaire, Herzl seems to have been much more influenced by developments in his home city of Vienna, including the rise to power of the anti-Semitic Mayor Karl Lueger. It was this, rather than the Dreyfus Affair, which provided the chief stimulus for his support for a Jewish homeland, and which did so at a time (1895) when the pro-Dreyfus campaign had not really begun.

Retrieved from https://www.newworldencyclopedia.org/p/index.php?title=Dreyfus_Affair&oldid=1095903
Categories:
Hidden category:
This page was last edited on 15 January 2023, at 09:42.
Content is available under Creative Commons Attribution/Share-Alike License; additional terms may apply. See Terms of Use for details.