Nicknamed the "University in the Forest" because of the serenity of its wooded location, the majority of its students live on campus. Drew maintains a standard of excellence for its students, focusing on individualized education and a faculty of high academic standards. Its seminary is of particular note. Yet, the University makes no religious demands on its students, welcoming those of all faiths and fostering a global perspective.

Drew University's Mission Statement emphasizes intellectual pursuit, diversity, and liberal arts education. The university aims to achieve these goals by focusing on developing and maintaining excellent faculty, who in turn are expected to "emphasize the interrelatedness of learning in undergraduate, graduate and theological schools and promote intellectual rigor and responsible citizenship, while preparing individuals for significant contributions to society."[1]

Nicknamed the "University in the Forest" because of the relative serenity of its wooded 186 acres (753,000 m²) relative to the school's suburban surroundings, Drew University maintains a combined undergraduate and graduate enrollment of approximately 2,500 students, with the majority living on-campus.[2]

Drew University has long been recognized for its small size, focus on students and individualized education, its excellent faculty, and in particular for its seminary. In 2008, the U.S. News and World Report ranking of U.S. Colleges determined Drew University to be listed as number 71 in all of America. Forbes magazine listed Drew as number 61 of their best U.S. Colleges.[3]

In 1867, Daniel Drew (1797-1879), a financier and railroad tycoon, endowed his antebellum estate in Madison for the purpose of establishing the Drew Theological Seminary.[4] The Seminary prospered for some 61 years, during which James Strong first published his seminal work, Strong's Concordance, in 1890, during his tenure as Professor of exegetical theology.[5] In 1928, the seminary expanded to create a College of Liberal Arts. The new college admitted its first class of 12 students in 1928, after the trustees of Drew Theological Seminary voted to accept a gift of $1.5 million from brothers Arthur and Leonard Baldwin to build and endow such an institution, and to change the name of the institution to Drew University.[4] The university started as an all-male school, but in the 1940s became co-educational. In 1955, a Graduate School became the third of the university's degree-granting entities. 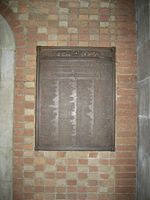 During the 1970s, the College also established, with generous assistance from the Mellon Foundation, a now widely-imitated freshman seminar program. It allows first-year students to participate, with faculty who also serve as their academic advisers, in intensive study of a topic of hopefully mutual interest. In 1984, psychology professors Philip Jensen and Richard Detweiler led an effort to provide a personal computer and application software to all incoming freshman, a program referred to as the "Computer Initiative." Drew was the first liberal arts college to have such a requirement. The Computer Initiative differentiates Drew from other liberal arts colleges, and continues to this day as a required computer purchase program.[6]

In more recent years, Drew University has continued to increase its academic programs and inventiveness, selecting to focus on interdisciplinary degree programs, taking on a more global perspective as well as continuing to search for new and efficient ways to teach.

Drew University is located on a large rural campus, adjacent to the town of Madison, New Jersey, and is only 30 miles away from New York City.[7] The University has 27 academic and administrative buildings on campus, ranging from the historic President's House to newer buildings, such as the Dorothy Young Center for Arts which houses all of Drew's fine and performing arts programs.[8] Drew offers several different living arrangements for its students, including traditional dormitories, townhouses, and apartments. Approximately 90 percent of its students live on campus, and the university has several facilities to accommodate its population. The Commons is the universities main dining facility for students and faculty. 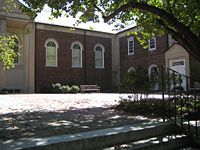 The University Library houses a collection of thousands of books, manuscripts, and periodicals available to students. In addition, it has a three distinction centers: The Methodist Archives Center, Drew University Archives, and Special Collections. The Methodist Archives Center collects and stores information and publications of Methodism from around the world.[9] The Drew University Archives is responsible to collecting and preserving historical information and documents regarding the university, while Special Collections stores and preserves a diverse selection of rare and historic items, many religious in nature.[10] 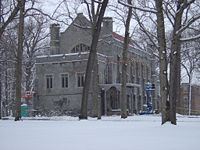 Ranger Stadium is the main field for Drew's field athletic teams, such as soccer and field hockey, while the Simon Forum and Athletic Center houses the universities basketball courts, an indoor track, and in door forum that can hold 4,000 people for special events.[8] The campus also has facilities for tennis and practice fields for its many teams.

The Florence and Robert Zuck Arboretum is an arboretum located on the southwest part of Drew University. The arboretum is open to the public. Created in 1980 in honor of faculty members Robert and Florence Zuck, the arboretum contains a mix of native and introduced trees.[4] Its two small ponds serve as student laboratories. They contain turtles, goldfish, catfish, and muskrats, and are also stops for migrating Canadian geese, ducks, and herons. 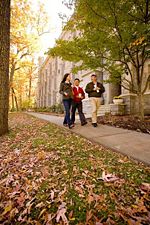 The Caspersen School of Graduate Studies offers the traditional Master of Arts (M.A.) and Doctor of Philosophy (Ph.D.) degrees. The Caspersen School is known for its particular faculty strengths in the study of Willa Cather, intellectual history, and medical humanities.

Drew Theological School offers degree programs designed to train candidates for the ministry. While affiliated with the United Methodist Church, its programs are open to individuals of all faiths. Degrees offered include the Master of Divinity (M.Div.), Master of Theological Studies (M.T.S.), Master of Sacred Theology (S.T.M.), and the Doctor of Ministry (D.Min.). The faculty of the Theological School are largely the same as in the Graduate Division of Religion, and are additionally noted in the areas of evangelism and environmental issues in religion. The Theological School is often noted for its strong ties to Korean Methodism.

Drew also offers several programs through the office of Continuing University Education. These programs include professional teacher continuing education; community education programs; certificates in pharmacological laboratory analysis (in a partnership with Johnson & Johnson) and in historic preservation; and a post-baccalaureate, pre-medical preparation program. Drew University offers its students a variety of social activities, including clubs and athletics. Drew offers several NCAA III sports, including men's baseball, men and women's basketball, men and women's cross country, and men and women's soccer.[7] The school also offers intramural and intercollegiate table tennis, volleyball and Racquetball.[7] Beyond housing these various sports, the Simon Forum and Athletic Center also provides students with the facilities to exercise and participate in non-organized athletic and sports activities.

Drew has over 50 student clubs and organizations. There are organizations for both fine and performing arts, which include the University Orchestra, Dramatic Society, Chorale, and Dance Team; community outreach oriented clubs such as the Women's Concerns Club, STAND (A Student-Anti Genocide Coalition), Drew University Habitat for Humanity, and Drew Environmental Action League; politically motivated like the Robert Smith Political Science and Law Society and Amnesty International; ethnic clubs, including the Muslim Student Association, Hillel: Jewish Student Organization, and Kuumba, The Pan-African Student Organization; sports and academic related clubs are also numerous, such as the Drew University Ultimate Frisbee Club, Drew Women's Rugby Football Club, Drew Men's Rugby Football Club, French Club, German Club and Drew University Pre-Medical Society; and finally, Drew offers several religious organizations for and run by students, which include Catholic Campus Ministry, InterVarsity Christian Fellowship, and the Pagan Society. The largest club, and perhaps one of the most unique, is That Medieval Thing, a medieval reenactment organization, which puts on an annual Spring festival called MedFest along several banquets through the year.[15]

WMNJ 88.9 FM is the student run radio station of the college broadcasts the local area and streams live on the internet.[16] The Acorn is the student run, weekly newspaper that covers university news and publishes creative works of students.

Beyond the campus, students have quick access to Madison, which offers the dining, shopping, cultural events, and nightlife commonly found in small university towns. The campus is also located 30 miles away from New York City, and public trains and buses run regularly to the city, where students can explore the many diversified interests of this major cosmopolitan city.