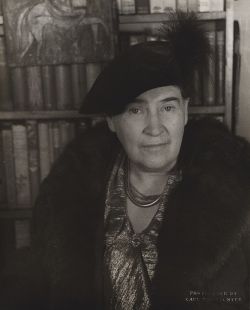 Wilella Sibert Cather (December 7, 1873 – April 24, 1947) is among the most eminent American authors. She is known for her depictions of life in the United States in novels such as O Pioneers!, My Ántonia, and Death Comes for the Archbishop.

The first two are part of the so-called "prairie trilogy," which catalogs the experiences of a family of Swedish immigrants on the American prairie. The last depicts the clash between the Roman Catholic Church and the Native American tribes of the Southwest, namely the Hopi and Arapaho peoples of New Mexico, in which she portrays their own native spirituality in a positive light. Predictably, the Christian missionary priests are divided between the greedy, corrupt ones and the more saintly examples of the faith.

Willa Cather was born on a farm in Back Creek Valley (near Winchester, Virginia). Her father was Charles Fectigue Cather (d. 1928), whose family had lived on land in the valley for six generations. Her mother was born Mary Virginia Boak (d. 1931), and she had six younger children: Roscoe, Douglass, Jessica, James, John, and Elsie.[1] In 1883, Cather moved with her family to Catherton in Webster County, Nebraska. The following year the family relocated to Red Cloud, Nebraska, the county seat. There, she spent the rest of her childhood in the same town that has been made famous by her writing. She insisted on attending college, so her family borrowed money so she could enroll at the University of Nebraska-Lincoln. On her first day she dressed as her "twin" brother William Cather. While there, she became a regular contributor to the Nebraska State Journal.

She then moved to Pittsburgh, Pennsylvania, where she taught high school English and worked for Home Monthly, and eventually got a job offer from McClure's Magazine in New York City. The latter publication serialized her first novel, Alexander's Bridge, which was heavily influenced by Henry James.

Cather was born into the Baptist faith but converted to Episcopalian in 1922, having attended Sunday services in that church as early as 1906.[2]

Cather insisted on being referred to as William from a very early age.[3]

Cather moved to New York City in 1906 in order to join the editorial staff of McClure's and later became the managing editor (1908). As a muckraking journalist, she coauthored a powerful and highly critical biography of Mary Baker Eddy, the founder of Christian Science. It was serialized in McClure's in 1907-8 and published as a book the next year. Christian Scientists were outraged and tried to buy every copy; it was reprinted by the University of Nebraska Press in 1993.

She met author Sarah Orne Jewett, who advised Cather to rely less on the influence of James and more on her native Nebraska. For her novels she returned to the prairie for inspiration, and these works became popular and critical successes. She won the Pulitzer Prize in 1923 for One of Ours (1922).

She was celebrated by critics like H.L. Mencken for writing about ordinary people in plainspoken language. When he won the Nobel Prize in Literature, Sinclair Lewis said Cather should have won it instead. However, later critics tended to favor more experimental authors and attacked Cather, a political conservative, for ignoring the actual plight of ordinary people.

In 1973, Willa Cather was honored by the United States Postal Service with her image on a postage stamp. Cather is a member of the Nebraska Hall of Fame. In 1986, she was inducted into the National Cowgirl Museum and Hall of Fame. She was a close companion to opera singer Olive Fremstad.

My Ántonia (first published 1918) is considered Cather's greatest novel. My Ántonia—pronounced with the accent on the first syllable of "Ántonia"—is the final book of the "prairie trilogy" of novels by Cather, a list that also includes O Pioneers! and The Song of the Lark.

The novel tells the stories of several immigrant families who move out to rural Nebraska to start new lives in America, with a particular focus on a Bohemian family, the Shimerdas, whose eldest daughter is named Ántonia. The book's narrator, Jim Burden, arrives in the fictional town of Black Hawk, Nebraska, on the same train as the Shimerdas, as he goes to live with his grandparents after his parents have died. Jim develops strong feelings for Ántonia, something between a crush and a filial bond, and the reader views Ántonia's life, including its attendant struggles and triumphs, through that lens.

The book is divided into five volumes, some of which incorporate short stories Cather had previously written, based on her own life growing up on the Nebraska prairies. The volumes correspond roughly to the stages of Ántonia's life up through her marriage and motherhood, although the third volume, "Lena Lingard," focuses more on Jim's time in college and his affair with Lena, another childhood friend of his and Ántonia's.

While interpretations vary, My Ántonia is clearly an elegy to the proud, hard-working immigrants who built new lives west of the Mississippi River and highlights the role of women pioneers in particular.

Cather taught English in a Pittsburgh high school from 1901 to 1906. This coincided, in part, with what some claim to be her 12-year lesbian relationship with Isabella McClung. The claim postulates that by concealing her relationships with the women she allegedly loved (including Louise Pound, McClung, and Edith Lewis, the latter of whom was her companion and shared an apartment with her in Greenwich Village for 40 years), Cather also concealed the ways in which these women possibly contributed to and nourished her creative writing abilities.[4]

Cather died in 1947 in New York, in the apartment she shared with Lewis, and is buried in Jaffrey, New Hampshire. At the time of her death, she ordered her personal letters burned.

Retrieved from https://www.newworldencyclopedia.org/p/index.php?title=Willa_Cather&oldid=1088799
Categories:
Hidden category:
This page was last edited on 23 November 2022, at 20:02.
Content is available under Creative Commons Attribution/Share-Alike License; additional terms may apply. See Terms of Use for details.