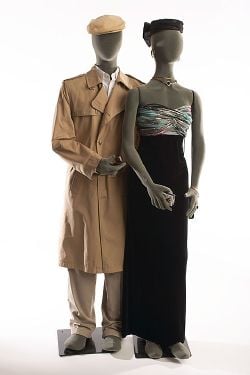 An intelligence officer's clothing, accessories, and behaviour must be as unremarkable as possible.

Espionage is the practice of obtaining confidential information through spying; a practice that often employs covert, clandestine, illegal or unethical behavior. Spies have been used to create political, military, and economic advantage through most of history. Espionage in the military is typically referred to as "military intelligence," while espionage in the corporate world is termed "industrial espionage." Most countries have both military intelligence organizations as well as civilian espionage and intelligence organizations. As the world has advanced and human society has changed, the separation into "friend" and "foe" has blurred and changed, and thus the role of espionage has also changed. Ultimately, it may be that nations and organizations find themselves able to cooperate in achieving common goals for the good of humankind, rather than using unethical means to steal each other's secrets in order to further their own self-centered desires.

Did you know?
The use of espionage dates back well into ancient history.

The use of espionage dates back well into ancient history. The Hebrew Bible describes the Hebrews' use of espionage in the Book of Joshua with the story of Rahab, a prostitute who harbored two Hebrew spies. Ancient Egyptian hieroglyphs and papyri describe the existence of court spies. Spies were also prevalent in the Greek and Roman empires. In Asia, the importance of deception and subversion were discussed by Chinese military tactician Sun Tzu around 500 B.C.E. in his famous work The Art of War. Two hundred years later, the prime minister of India wrote the Arthashastra, a treatise on government well known for its discussion of the use of espionage. Ninjas were often employed as mercenary spies in feudal Japan, and were known for their skill at infiltrating the enemy. In Europe during the Middle Ages, espionage played a large role in both The Crusades and the Inquisition. During the Renaissance, the political philosopher Niccolo Machiavelli strongly advocated the use of espionage by the ruling class. Elizabethan England was known for the effectiveness of its espionage system, which employed linguists, scholars, and scientists.[1]

From the eighteenth century onwards, espionage gained even more importance. Industrialization, colonialism, and complicated world politics all fueled the quest for information. Informants during the French Revolution were used to track down traitors for trial and execution. Colonial governments used espionage to quell uprisings.

The art of espionage was transformed as technology and information systems grew. Inventions like the camera and telegraph revolutionized the clandestine collection and transmission of information, and gave rise to new levels of cryptography and gadgetry. Cameras were made smaller and smaller, and new means were constantly being developed to help spies covertly collect intelligence.

World War I was responsible for a marked change in the development and scope of many countries' espionage programs. Due to the complicated global political climate and numerous, often secret, allegiances between countries, espionage became a valuable and necessary means of obtaining essential information. It was not until World War I that some countries, including the United States, organized agencies solely devoted to the collection of intelligence. World War I also prompted the formation of the United States' Espionage Act in 1917. Repealed in 1921, the act imposed up to twenty years in prison and $10,000 in fines for interfering with the recruiting of troops or the disclosure of information relating to national defense.

World War II espionage activities were characterized by the use of cryptography, or codes. One of the most well known codes was the German "Enigma" machine, a machine first marketed commercially in 1923, but then adopted and refined by the German military, which used it extensively during World War II. The machine consisted of a series of rotors and electric wiring that were capable of producing a seemingly unlimited variation of codes. German U-boats were equipped with Enigma machines, and codes were changed daily. The British, with help from the Poles, cracked the "impenetrable" Enigma code, enabling them to defend against German attacks.[2]

The Cold War involved intense espionage activity between the United States, the Soviet Union, and allies on both sides; in particular, information related to nuclear weapons secrets was sought after. During the Cold War, both American and Soviet intelligence agencies expanded considerably, employing thousands of agents. SIGINT technology also grew; satellites made real-time observations possible, and computers aided in the collection of information. No longer were agents the primary source of information; while there were still tasks only performable by humans, satellites and SIGINT were responsible for the penetration of the Soviet Union.[3]

With the end of the Cold War, the focus of espionage changed. While the designations of "friend" and "foe" continued to blur for many countries, they became based more on economic relationships than historical and cultural alliances. Intelligence agencies continued to use espionage to collect intelligence on both friends and enemies, but the targets of spies changed from people to information.[4] SIGINT systems continued to grow in complexity and ability. Programs like the United States' "Echelon" have been used to monitor electronic communications, including mobile and international land-line calls and fax transmissions. The focus of espionage also shifted from governmental and political targets to terrorist organizations and threats.

The Life of a Spy

While intelligence agencies are staffed by large numbers of administrators and analysts, the most romanticized member of the intelligence community is the spy. Employed to obtain secrets, spies often undergo rigorous training, intensive background and character checks, and travel to foreign countries. Agents may pose as students, tourists, journalists, or business travelers, or they may attempt to pose as a national and spy on an organization from within (known as a "mole").

An example of the life of a spy is found in Oleg Kalugin. During the Cold War, KGB agent Kalugin was sent to the United States as an exchange student, with the goal of making as many friends and contacts as possible. Later, he worked as a journalist, simultaneously collecting information and recruiting Americans to the Soviet cause. According to Kalugin, who later became a major general and chief of foreign counterintelligence, the Soviets were unparalleled in their attempts at subversion. Agents ran worldwide peace congresses, festivals, women’s movements, and so forth, with the intention of creating discord and weakening the West. Many spies were responsible for disseminating fake information, forgeries, and rumors, such as the rumor that AIDS was invented by the CIA.[5]

Little is publicly known about spies; espionage is by nature secret, and much of what the public "knows" about the life of a spy comes from fiction and film. Even seemingly harmless facts about the nature of espionage activity, such as the operating budget of the U.S. intelligence community, are closely guarded. This secrecy is by necessity a major part of a spy's life; they must lie to close friends and family in order to keep their occupation secret. Those involved in real-life espionage activity have denounced the romanticized version of spying found in film and literature. Markus Wolf, the former head of East Germany's foreign intelligence agency, is quoted as saying that spying "is dirty; people suffer."[3]

The risks of espionage activity are often high. Spies caught by foreign governments are often deported or imprisoned. An agent caught spying on their own country can be imprisoned or even executed for treason. While there is a lack of regulation on activity performed outside individual countries' borders (information gathered from satellites and in international waters, for example), most countries have anti-espionage legislation designed to protect national security.

In Israel, the Institute for Intelligence and Special Tasks, often abbreviated "Mossad," or "Institute," is responsible for the collection and analysis of information, as well as covert operations. Some of Mossad's operations include bringing Jews home from foreign countries, preventing terrorism and weapons development in hostile countries, and developing special diplomatic relations.[7]

During the Cold War, Russian intelligence services were performed by one of the world's most well known agencies: the KGB, the Komitet Gosudarstvennoy Bezopasnosti (“Committee for State Security”). After the collapse of the Soviet Union, intelligence agencies underwent extensive restructuring. The Main Intelligence Directorate (GRU) engages in foreign espionage and intelligence gathering, as well as military intelligence. The Foreign Intelligence Service (SVR) collects intelligence worldwide, both political and economic, and the Federal Agency for Government Communications and Information (FAPSI) focuses on SIGINT intelligence.

In the United States, the Central Intelligence Agency (CIA) is responsible for foreign intelligence collection. Domestically, the Federal Bureau of Investigation (FBI) collects information and operates as a counter-espionage agency.