The Book of Joshua (Hebrew: Sefer Y'hoshua—ספר יהושע) is the sixth book of Bible. It tells the story of Joshua and the Israelites as they march into Canaan, conquer its inhabitants, and prepare to establish themselves as a nation. It is most famous for its dramatic description of the Battle of Jericho.

In Jewish tradition, the Book of Joshua is the first of the books of the "Prophets," although in terms of its literary content—like the Books of Samuel and Kings—it is not a book of prophecy but a history. Some modern scholars theorize that a precursor to Joshua had once been a sixth book of the Yahwistic epic, or "J Source" following the five books of the Pentateuch, but was later incorporated into the historical books edited by the Deuteronomist in the late seventh century B.C.E.

The Book of Joshua describes the Israelites under Joshua as decisively winning every battle they fought with the Canaanites except on rare occasions when a sin had caused God to withdraw his support. Joshua's divinely-commanded tactics allowed the taking of no prisoners, and he is described as slaughtering the entire populations of the cities he conquered, including women and children. This has caused considerable debate both among historians, who doubt the veracity of the book's account of the conquest of Canaan, and theologians, who question whether a God of goodness could truly have ordered such behavior as the Book of Joshua describes. 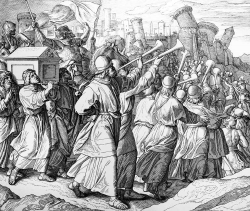 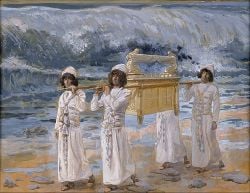 The Jordan miraculously stops before the Ark. 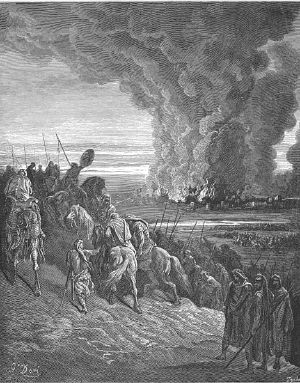 Joshua Burns the Town of Ai. 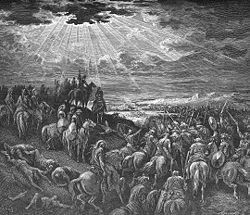 So Joshua took this entire land: the hill country, all the Negev, the whole region of Goshen, the western foothills, the Arabah and the mountains of Israel with their foothills, 17 from Mount Halak, which rises toward Seir, to Baal Gad in the Valley of Lebanon below Mount Hermon. He captured all their kings and struck them down, putting them to death. 18 Joshua waged war against all these kings for a long time. 19 Except for the Hivites living in Gibeon, not one city made a treaty of peace with the Israelites, who took them all in battle. 20 For it was the Lord himself who hardened their hearts to wage war against Israel, so that he might destroy them totally, exterminating them without mercy, as the Lord had commanded Moses.[2]

Division of the Land 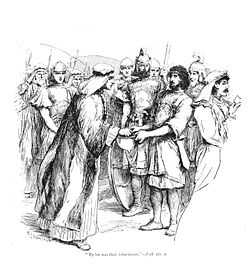 Joshua uses a system of lots to assign lands to each of the tribes west of the Jordan.

This section in someways offers a contradictory view to the previous claim of near complete victory. First a description is given of the domains east of the Jordan which were conquered and given to Reuben, Gad, and half of Manasseh. The Levites are not to receive a particular given territory, but are assigned to cities within the various territories, where they will serve as local priests and religious authorities. The territory west of the Jordan is then handed out by lot.

The Israelites then assemble at Shiloh, where the Tabernacle is set up and Joshua sends out a survey team. When the survey is complete, the remaining land is divided among the rest of the tribes. Finally, the tribes whose lands are east of the Jordan are allowed to go to their lands.

Other notable events in this section include: 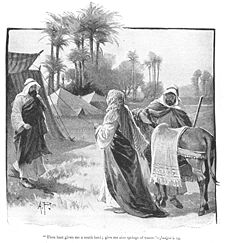 Achsah asks for an expanded inheritance.

Jewish tradition ascribes authorship of the book to Joshua, and consequently places its origin at the time of the supposed Israelite invasion (which biblical chronology places in either the fifteenth or thirteenth centuries B.C.E.). Some opinions presented in the Talmud state that the book was written by Joshua except for the last verses (24:29-33) which were added by Phinehas the priest; other rabbinical writers took a different stance (see below). 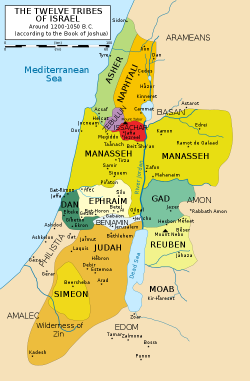 Map reconstructs tribal areas. The tribe of Dan would also claim a larger territory to the north. The Philistines seem to have controlled a much larger territory than that which is recognized for them, and parts of these territories are elsewhere recognized as belonging to the Moabites and Edomites, considered "brothers" of the Israelites.

The author presents himself as an eyewitness to the accounts described, occasionally using first person pronouns (for instance, in Joshua 5:1). Joshua himself, however, is usually described in the third person. Some sections (e.g. 5:9, 7:26, 24:29-33), even according to Jewish tradition, could however only have been added after Joshua's death; tradition normally ascribes these sections to Eleazar or Phinehas. Also problematic is the frequently used phrase to this day, suggesting a substantial amount of time between the events and the account being written.

In Christian circles, both Catholic and Protestant, the authorship has been considered dubious since ancient times. The church father Theodoret proposed that it was written by a later author who had access to documents from Joshua's time.[5]

In early modern times, religiously conservative Jewish scholars continued to generally adhere to the traditional view, arguing that the book was written by a contemporary of Joshua, and their view was also adopted by Protestants. However, with the advent of source criticism, many scholars now reject claims of authorship by Joshua or his contemporaries. Most modern scholars argue that the Book of Joshua must be regarded as a compilation. An analysis of its contents leads to the proposition that Joshua's sources are of the same character as those of the Pentateuch. Indeed, many now use the term Hexateuch to refer to the traditional five "Books of Moses" plus the Book of Joshua.

In this theory, much of Joshua is a continuation of the "JE" source in the Torah, which itself is a combination of the southern Yahwist source (J) and the northern Elohist source, "E" (see documentary hypothesis). The Deuteronomist is considered to have detached the Joshua section of the hexateuch at some later point and embedded it within the Deuteronomic history, making a number of edits to frame the various narratives and insert his particular theology.

Relationship with the Book of Judges

Certain incidents mentioned by later biblical texts, particularly the Book of Judges, are often considered to drastically conflict with the situation presented by the Book of Joshua. For instance, Jericho, represented in Joshua as completely overthrown and concerning the rebuilding of which a solemn curse is invoked, is mentioned as existing at a later date, when it appears as a holy, rather than cursed, city.[6] Even more striking, where Joshua concludes with a nearly all-out victory, the narrative of Judges begins by portraying Canaan as hardly conquered, with the Israelite tribes showing little of the cohesion portrayed in Joshua. One theory suggests that the story of Joshua's seeming invincibility results from a later writer or editor during the time of King Josiah seeking to impress the king with the idea that he, too, would triumph militarily if he devoted himself to God as Joshua did. Josiah was considered as Israel's most righteous king by the biblical writers, yet he was slain in battle when he confronted Pharaoh Neccho II at the battle of Meggido.[7] 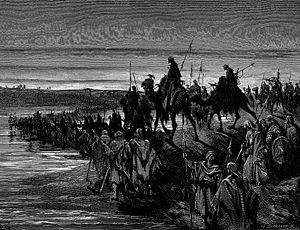 Joshua and the Israelites crossing the Jordan

Although early archaeological excavations seemed to support the historicity of Joshua, for example by finding destruction layers in a number of prominent sites such as Jericho, the conclusion that such destruction must have been due to Joshua has since been largely rejected. More recent reassessments and later excavations have reversed the earlier conclusions. Most archaeologists now believe that the destruction layers of various cities date from widely different times, and thus rather than a unified short military campaign, the remains are more suggestive of a series of isolated disasters/attacks over a period of centuries.

In the particular case of Jericho, it was already abandoned during the time of the Israelite conquest. Thus the supposed conquest of Jericho by the Israelites would have been the conquest and destruction of an empty ruin. The remains of Lachish and Hazor were both Canaanite cities in the Late Bronze Age. Between the thirteenth and twelfth centuries B.C.E., both cities were destroyed; they were later resettled by Israelites. Ai, on the other hand, appears to have been abandoned during the Early Bronze Age and was not reoccupied until well after the twelfth century B.C.E.. Even if one of these sets of cities was destroyed by an Israelite conquest, the other must have been destroyed at some point that was over a century later or earlier, contradicting the biblical account of a short period in which both sets were destroyed. In addition Ai is a particularly odd name for a town to have before its destruction, since it means ruin; meanwhile in the case of Hazor, a number of Egyptian inscriptions claim that it was destroyed by Seti I (circa 1300 B.C.E.) rather than the Israelites.

The time periods involved in the destruction layers of the cities overlap the campaigns of the Sea Peoples (who consistently burnt rich cities to the ground, even if they intended to later settle on the ruins), and the currently unexplained general late Bronze Age collapse of civilization in the whole eastern Mediterranean. It is far more plausible, from the point of view of an increasing majority of archaeologists, for these causes to have been responsible for the destruction of the cities, rather than an invasion of Israelites lasting only about 20 or so years.

In addition, since archaeological remains show a smooth cultural continuity in this period, rather than the destruction of one culture (Canaanite) and replacement by another (Israelite), a growing majority of archaeologists believe that the Israelites were simply an emergent subculture within Canaanite society—i.e. that an Israelite conquest would be a logical impossibility—it would have involved the Canaanites invading themselves, from Canaan.[7]

A major difficulty for modern readers of the Book of Joshua arises out of the command given by God to completely exterminate "anything that breathes" in the cities of Canaan (Deuteronomy 20:16-18).

Liberal theologians see this as an ethically unjustifiable order to commit genocide, which is inconsistent with the overall view in the Hebrew and Christian scriptures of God as the loving, compassionate parent of all mankind. In this view, the attitude of the Book of Joshua should be seen as originating in the intolerant views of the later Jerusalem priesthood rather than in the heart and mind of God.

Conservative theologians, on the other hand, see the book as an historically accurate account written during or soon after the life of Joshua. Thus, if the book says God told Joshua to do something, this must be taken as fact. They often give one of the following explanations to this problem:

Unification theologians also grapple with this question, usually affirming one of two views: 1) that God used different means in the Old Testament Age than he wants us to use today or 2) that because the Bible is not the literal word God, we should not necessarily accept the clearly genocidal actions of Joshua as being inspired by God.

Retrieved from https://www.newworldencyclopedia.org/p/index.php?title=Joshua,_Book_of&oldid=1078343
Categories:
Hidden category:
This page was last edited on 7 September 2022, at 19:56.
Content is available under Creative Commons Attribution/Share-Alike License; additional terms may apply. See Terms of Use for details.