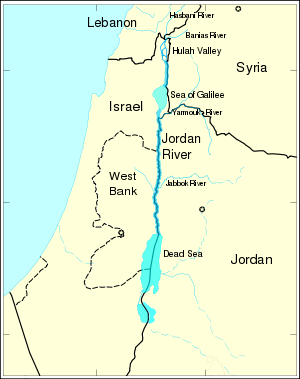 The Jordan River (Arabic: Nahr Al-Urdun; Hebrew: Ha-Yarden River) is a river in Southwest Asia flowing through the Great Rift Valley into the Dead Sea. The Jordan River, with the lowest elevation of any river in the world, rises at the Syrian-Lebanese border where the Hasbani River of Lebanon, and Banias River of Syria meet. From there it flows south through northern Israel into the Sea of Galilee and eventually empties into the Dead Sea. The river is considered the border between the State of Israel and the West Bank.

From its source to its Dead Sea destination 124 miles away (200 kilometers), the Jordan actually covers 223 miles (360 kilometers) due to its winding course. As the only major river in the area, it is one of the most significant features of the Palestinian landscape.

Historically and religiously, the Jordan River is considered to be one of the world's most sacred rivers. There are countless references to the Jordan in both the Hebrew and Christian Bibles, yet perhaps its most significant is as the location of the baptism of Jesus Christ.

The Jordan River rises at the foot of Mount Hermon from three principal sources:

The Hula Valley in northern Israel is the intersection point for the source rivers, which then join and form the Jordan River. The Hula Valley plain was once lake and marshland. In the 1950s, 15,000 acres (6,000 hectares) were drained and transformed into agricultural land. The southern end of the valley has a basaltic barrier which the Jordan has cut a gorge through.

From the Sea of Galilee (the point at which the main tributaries join together), the river's plain spreads to a width of approximately 15 miles (24 kilometers). This area of terraces is known as the Ghawr (or Ghar) and is cut by wadis or rivers into towers, pinnacles and badlands. These form a maze of ravines alternating with sharp crests and rises.

From this point, Jordan's floodplain, the Zur sees a widely winding course, which accounts for the excessive length of the river flow in comparison to the area it traverses to reach the Dead Sea. Dams were built along the river in the Zur region, turning the former thickets of reeds, tamarisk, willows, and white poplars into irrigated fields. After flowing through the Zur, the Jordan drains into the Dead Sea through a broad, gently sloping delta.

The tributaries of the Jordan are: 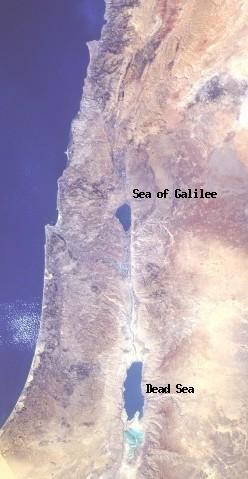 The Jordan River is shallow, with its high-water period lasting from January to March, while its low-water period occurs at the end of summer and the beginning of autumn. Its current is swift, carrying a heavy load of silt. It is unnavigable due to its precipitous upper course, its seasonal flow, and its shallow, twisting lower course.

The River's high degree of salinity is due to the existence of thermal springs, mainly in the Tiberias region on the western side of the Sea of Galilee. There is also a high concentration of gypsum. Irrigation waters often leave a salt residue in the soil.

In modern times the waters are 70 to 90 percent used for human purposes and the flow is much reduced. Because of this and the high evaporation rate of the Dead Sea, the sea is shrinking. All the shallow waters of the southern end of the sea have been drained in modern times and are now salt flats.

The waters of the Jordan are an extremely important resource to the dry lands of the area and have been a source of conflict between Lebanon, Syria, Jordan, Israel and the Palestine.

The Jordan Valley runs north-south, forming part of the Great Rift Valley which extends four thousand miles from northern Syria to central Mozambique in East Africa. The Jordan Valley itself is long and narrow, averaging only 6 miles (10 kilometers) in width. It is much lower than its surrounding landscape, with steep, sheer, bare walls.

The Hula Valley receives approximately 22 inches (550 millimeters) of rainfall per year, but only about 3 inches (75 millimeters) fall north of the Dead Sea. The Jordan Valley is fed by rains falling on the neighboring plateaus, through the wadi system which flow through the valley.

In 1964 Israel began operating a dam that diverts water from the Sea of Galilee, a major Jordan River water provider, to the national water carrier. In the same year, Jordan constructed a channel that diverted water from the Yarmouk River, another main tributary of the Jordan River. These acts resulted in great damage to the ecosystem.

Syria has also built reservoirs that catch the Yarmouk's waters. It is feared that Yarmouk's flow into the Jordan River could dwindle to a trickle, when a dam built jointly by Syria and Jordan begins operating.

Environmentalists blame Israel, Jordan and Syria for the loss of freshwater foliage that once flourished along the river's banks. It has been replaced with saline vegetation due to the three countries replenishment of the river with sewage water, agricultural runoff and salt water,

In the Hebrew Bible, the Jordan River is referred to as the source of fertility to a large plain ("Kikkar ha-Yarden"), called on account of its luxuriant vegetation "the garden of God" (Genesis 13:10).

The Christian Bible mentions the Jordan frequently, about 175 times in the Old Testament and about 15 times in the New Testament, often with scattered and indefinite references.

The first mention of the Jordan is when Abraham and Lot parted company:

And Lot lifted up his eyes, and saw that the Jordan valley was well watered everywhere like the garden of The Lord, like the land of Egypt, in the direction of Zoar; this was before The Lord destroyed Sodom and Gomorrah. So Lot chose for himself all the Jordan valley, and Lot journeyed east; thus they separated from each other." (Genesis 13)

Jacob was renamed Israel at the ford of the Jabbok River, a tributary of the Jordan:

The same night he arose and took his two wives, his two maids, and his eleven children, and crossed the ford of the Jabbok. He took them and sent them across the stream, and likewise everything that he had. And Jacob was left alone; and a man wrestled with him until the breaking of the day. When the man saw that he did not prevail against Jacob, he touched the hollow of his thigh; and Jacob's thigh was put out of joint as he wrestled with him. Then he said, "Let me go, for the day is breaking." But Jacob said, "I will not let you go, unless you bless me." And he said to him, "What is your name?" And he said, "Jacob." Then he said, "Your name shall no more be called Jacob, but Israel, for you have striven with God and with men, and have prevailed." (Genesis 32)

Opposite Jericho it was called "the Jordan of Jericho" (Numbers 34-35). The Jordan has a number of ford crossings, one of which is famous as the place where many Ephraimites were slain by Jephthah (Judges 12). It seems that these are the same fords mentioned as being near Beth-barah, where Gideon lay in wait for the Midianites (Judges 7). In the plain of the Jordan, between Succoth and Zarthan, is the clay ground where Solomon's brass foundries were located (1 Kings 7).

In Biblical history the Jordan appears as the scene of several miracles, the first taking place when the Jordan, near Jericho, was crossed by the Israelites under Joshua (Joshua 15-17). Later the two tribes and the half tribe that settled east of the Jordan built a large altar on its banks as "a witness" between them and the other tribes (Joshua 10, 26). The Jordan was said to be crossed dry-shod by Elijah and Elisha (2 Kings 2). Elisha performed two other miracles at the Jordan: he healed Naaman by having him bathe in its waters, and he made the ax of one of the children of the prophets float, by throwing a piece of wood into the water (2 Kings 5, 6).

At the end of their Wilderness Journey, after Joshua succeeded Moses as the leader of the people, the Israelites entered the Promised Land by crossing the Jordan River that, like the Red Sea, was miraculously parted for them (Joshua 3).

The New Testament details John the Baptist’s baptism of Jesus in the Jordan (Matthew 3), perhaps its most significant reference within Christian belief.