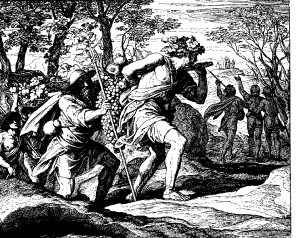 Caleb (Hebrew כָּלֵב‎; Kalev), was a figure in the Hebrew Bible, noted for his unwavering faith in God. He is identified as the son of Jephunneh the Kennizite, but also associated with the tribe of Judah.

Caleb demonstrated his faith as one of the 12 spies sent by Moses to report on the military and economic situation of Canaan. When the rest of the Israelites feared to enter the promised land on account of the military superiority of the Canaanites, Caleb expressed confidence that the Israelite invasion would be successful. He and Joshua alone, among the first generation of the Israelites of the Exodus, were allowed by God to settle in Canaan before dying. After the conquest of Canaan, Caleb received the town of Hebron and its surrounding territory as his allotment.

Rabbinical legends about Caleb include that he became the husband of the prophetess Miriam and the progenitor, through a later wife, of the House of David. Critical scholarship suggests that, as a Kenizzite, Caleb represented a Canaanite tribe that joined the tribe of Judah and affiliated with Israel sometime after the events described in the story of the Exodus.

During the Exodus from Egypt, Moses led the Israelites to build the Tabernacle, after they had repented of their earlier sin of worshiping the Golden Calf. He then brought them to the outskirts of Canaan. There, Moses sent 12 scouts (or spies, meraglim in Hebrew) into Canaan to report on what was there—one spy representing each of the 12 tribes. "See what the land is like and whether the people who live there are strong or weak, few or many," Moses commanded. "What kind of land do they live in? Is it good or bad? What kind of towns do they live in? Are they un-walled or fortified? How is the soil? Is it fertile or poor? Are there trees on it or not?"

Caleb was one of these spies. In Canaan, he and his colleagues saw a fertile land "flowing with milk and honey." They brought back samples of the abundant crops they had seen. However, they also saw strongly fortified cities and mighty warriors.

After their initial report, Caleb took the lead in silencing the crowd and declaring: "We should go up and take possession of the land, for we can certainly do it." (Num. 13:30) Ten of the scouts, however, said that the land would be impossible to claim, and that the warriors of Canaan were in fact giants that made the Israelites seem like grasshoppers.

That night, fear overcame the congregation, and the Israelites began to speak of electing a leader to take them back to Egypt. Among the spies, only Joshua (from the tribe of Ephraim) and Caleb (representing Judah), testified that God would be able to deliver Canaan into the hands of the Hebrew nation. Those who favored returning to Egypt, however, spoke of stoning Joshua and Caleb.

At this point, the narrative indicates that God grew so angry that he expressed to Moses his plan to destroy all the Israelites, starting a new nation centering on Moses himself. Moses implored God to forgive Israel's sin, and God agreed, with the stipulation that none of the current generation would enter the Promised Land except Caleb. "Because my servant Caleb has a different spirit and follows me wholeheartedly," God told Moses, "I will bring him into the land he went to, and his descendants will inherit it." (Num 14:24)[1]

To force their obedience, God struck the congregation with a plague. All of the spies except Caleb and Joshua died as a result. The Israelites then had a change of heart and determined to attack Canaan. Lacking divine support, however, they were defeated by the Amalekites and Canaanites and driven back into wilderness.

For their faithlessness in response to Caleb's and Joshua's testimony, God caused the Israelites to wander in the desert for 40 years before being allowed to enter Canaan and conquer it. The only adult Hebrews to survive these 40 years and enter Canaan were Caleb and Joshua.

After the conquest, Caleb was given Hebron and the region surrounding it. He drove out the three powerful chieftains from the area—Sheshai, Ahiman, and Talmai. Identified as descendants of Anak, these men and their tribes were of the race earlier characterized as giants (Joshua 15). In the conquest of this territory Caleb offered the hand of his daughter Achsah to the man who would capture Kiriath Sepher for him. The feat was accomplished by Caleb's close relative, Othniel. At Achsah's request, valuable "upper springs" were added to the original bequest.

Caleb's name is connected with a number of towns in southern Judah, and several clans of the area were known as Calebites (I Chron. 2:41). 1 Samuel 25:3 states that Nabal, the husband of Abigail before David, was of the house of Caleb. He had been a wealthy owner of flocks in the "Negev of Caleb."

In the rabbinical sources, Caleb married the prophetess Miriam, although she was neither fair nor healthy, but he appreciated her piety. Caleb, the son of Hezron (I Chron. 2:18-20), is identified with Caleb, the son of Jephunneh (Num. 13:6), the epithet "Jephunneh" having been given to him because he "turned away" from the sinful intention of the other spies who advised the people against going into the Holy Land. Caleb was thus the father of Hur, from his second wife Ephrath (I Chron. 2:19). He was also therefore the progenitor of the Davidic house, which is descended from the "Ephrathite" Jesse (1 Sam. 17:12; Soṭah 11b; Sanh. 69b). Caleb is also called "the Kenizzite," because Kenaz, the father of Othniel, was his stepfather. Othniel thus was his half-brother (Soṭah 11a, 12a).

When Caleb came to Canaan as one of the spies, he visited the graves of the patriarchs in Hebron and prayed for their help against the sinful intention of his colleagues (Soṭah 34b). It was he alone who insisted that the spies should take some of the fruits of the country with them in order to convince the people of the extraordinary fertility of the land. As they did not wish to do this, Caleb drew his sword and said: "If you will not take any fruit with you, then either my life or yours!" (Tan., Shelaḥ 15, ed. Buber; Num. R. xvi. 14). Thoroughly realizing the evil intentions of the spies and knowing that it was useless to attempt to dissuade them, he did not reveal his faithful attitude, but acted as if he agreed with them (Tan., l.c. 19; Num. R, l.c. 19). When the country was divided, Caleb and Joshua received the portions that had been intended for the other spies (B. B. 117b, 118b).[2]

According to the biblical text, Caleb was of the tribe of Judah. He represented that tribe among the 12 spies. However, Caleb is also identified several times as a Kenizzite, one of the Canaanite tribes whose land was given to Abraham by God, as mentioned in Genesis 15:19. This leads to speculation that the Kenizzites may have affiliated with the Israelites at some point, probably fighting alongside them in their quest to unify Canaan under the Israelite federation. In this theory, Caleb's role in the Exodus story would probably have been written back into Israelite history to express the Kenizzites' organic belonging to the tribe of Judah. Another theory is that the original Calebites may have been the Edomite clan of Kenaz, which had migrated to southern Judah and settled in the vicinity of Hebron.

Modern criticism finds several different strata to the Caleb material, representing different points of view. The oldest writer (J) calls him simply Caleb, while D and P call him Caleb son of Jephunah, and makes him one of the 12 spies. In the original form of the story he alone brought back the favorable report, but elsewhere, Joshua is named as one of the spies and given precedence over Caleb as a faithful leader. Also, Joshua 15:14-19 connects Caleb with the expulsion of the sons of Anak from Hebron, but Joshua 10:36 gives credit to Joshua himself or the utter destruction of Hebron.

Caleb's name is spelled with the same consonants as כֶּ֫לֶב‎ kéleḇ meaning "dog," prompting the common conclusion that the name Caleb means "dog." He may thus be the eponymous ancestor of the clan of Kenizzites whose totem was the dog. Others argue that it is a mistake to translate "Caleb" as "dog." Elsewhere the biblical text uses the flowery expression כְּלֵבָב‎ kəlēḇāḇ "as the heart" and כִּלְבַב‎ kilḇaḇ "as the heart of," and there is also the modern expression כִּלְבָבִי‎ k'l'vavi "after my own heart."

Retrieved from https://www.newworldencyclopedia.org/p/index.php?title=Caleb&oldid=1029156
Categories:
Hidden category:
This page was last edited on 16 December 2019, at 05:42.
Content is available under Creative Commons Attribution/Share-Alike License; additional terms may apply. See Terms of Use for details.