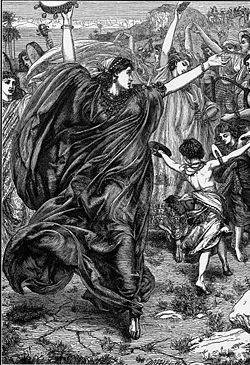 "Then Miriam the prophetess, Aaron's sister, took a tambourine in her hand, and all the women followed her, with tambourines and dancing." (Ex. 15:20)

Miriam (מִרְיָם, Miryam—"wished for child," "bitter") was the sister of Moses and Aaron, and the daughter of Amram and Jochebed. Her story is told in the books of Exodus and Numbers in the Hebrew Bible. Miriam's name could also be derived from the Egyptian words myr "beloved."

Miriam enabled the infant Moses to be nursed by his own mother after being adopted by the daughter of Pharaoh. She later became a prophetess in her own right. She led the Israelite women in celebrating the Israelites' successful march through the sea, in a verse still sung by millions of Jews today. However, when she and Aaron criticized Moses for marrying a Cushite woman, she was punished by God with a dreaded skin disease. Shortly after her death years later, the Israelites lost faith in Moses and Aaron, causing Moses himself to sin by striking the rock at Kadesh.

Miriam is the only woman in history known to have been allowed to enter the sacred Tabernacle courtyard. She was honored in verse by the prophet Micah, who placed her on a par with Moses and Aaron, and her name was particularly popular among Jews in New Testament times, where it is rendered as "Mary." In rabbinical tradition, Miriam was the teacher and leader of Israelite women; as a girl she convinced her parents to risk having additional children despite Pharaoh's policy of murdering Israelite baby boys; and it was her merit that caused the miraculous, life-giving waters of the desert to flow for her people. 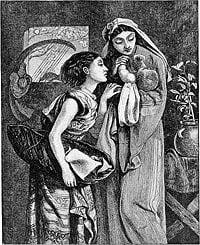 Miriam assists her mother in saving the baby Moses from Pharaoh.

Miriam, at Jochebed's request, followed the infant Moses as he floated down the Nile in a reed basket to evade the Pharaoh's order that newborn Hebrew boys be killed. She watched as the Pharaoh's daughter discovered the infant. Approaching the princess, she asked: "Shall I go and get one of the Hebrew women to nurse the baby for you?" (Ex. 2:7) Miriam then returned with Jochebed. Pharaoh's daughter sent the child home with the "nurse," who raised him until he was weaned and grew older. As a result of Miriam's act, Moses could be raised to identify with his background as a Hebrew, as well as his new role as an Egyptian prince (Exodus 2:1-10).

Miriam does not appear again in the text until the time of the Exodus. She is called a prophetess, and composes a victory song after Pharaoh's army is drowned in pursuit of the Israelites. She plays a central role in leading the Israelite women:

When Pharaoh's horses, chariots and horsemen went into the sea, the Lord brought the waters of the sea back over them, but the Israelites walked through the sea on dry ground. Then Miriam the prophetess, Aaron's sister, took a tambourine in her hand, and all the women followed her, with tambourines and dancing. Miriam sang to them:

This short verse is considered by scholars to be one of the oldest in the Bible and is also celebrated in Jewish liturgy and folk music to this day.

The sacred Tabernacle area where God met with Miriam, Aaron, and Moses.

Later, Miriam objects to the marriage of Moses to a Cushite woman. She and Aaron discuss the matter with Moses. Afterward, God commands her to enter the Tabernacle area, where He speaks to Miriam and Aaron outside the sacred tent. No other woman is recorded as having the privilege of entering this sacred space.

However, Miriam and Aaron have presumed too much. Standing at the entrance of the tent in a pillar of cloud, God speaks to tell them that while they may be prophets, Moses' authority is higher than theirs. To Moses alone does God speak "face to face." To punish her, God strikes Miriam with a disease making her skin white and putrid. After Aaron asks Moses to intercede for Miriam, Moses prays that God will heal her. Moses requires her to be confined outside the camp for seven days, after which she recovers (Numbers 12). Aaron, however, is not punished, perhaps because a skin disease of this nature would disqualify him from the priesthood. The text implies the essential role of Miriam in the community in noting: "the people did not move on till she was brought back." (Num. 12:15)

Miriam dies and is buried at Kadesh at a great old age. Her death apparently affects the Israelites deeply. Their internal longing for Miriam as a mother-figure is paralleled by the external thirst they experience for lack of water at this encampment. Moses, too, may have been affected by the loss of his sister. Commanded by God to "speak" to a rock and bring forth water for the people, Moses instead loses his temper, denounces the people, and strikes the rock twice without speaking to it. Water is indeed produced, but God punishes both Moses and Aaron for this act, telling them that they will not be allowed to enter the Promised Land of Canaan as a result (Num. 20:12).

A passage in Micah suggests that Miriam had a legacy with significant regard among later prophets:

And I brought you forth out of the land of Egypt, and redeemed you from the house of bondage, and I set before you Moses, and Aaron, and Miriam." (Micah 6:4)

In New Testament times, Miriam was perhaps the most popular name for Jewish woman. The Greek rendering of Miriam is "Mary." At least three important people in Jesus' life were named Miriam: his mother Mary; his best known female disciple Mary Magdalene; and Mary of Bethany; the sister of Martha and Lazarus who washed and anointed Jesus shortly before his death.

Today, Miriam is a popular figure among Jewish feminists. Some place a "Cup of Miriam," filled with water, beside the customary "Cup of Elijah" (filled with wine) during the Passover Seder. The cup contains water in memory of the midrashic tradition of Miriam's association with the miraculous waters that accompanied the Israelites on their journey through the desert (see below). Some Orthodox Jews have revived a millennium-old custom of adding a piece of fish to the Seder plate. The lamb, egg, and fish symbolize the three prophets—Moses, Aaron, and Miriam—referred to in Micah 6:4. This food also alludes to the mythical beasts - the bird Ziz, the animal Behemoth, and the sea-creature Leviathan - which, according to Jewish legend, are to be served at the feast for the righteous following the resurrection of the dead.[1]

In praise of Miriam Miriam is greatly lauded by the rabbis. The Talmud preserves a tradition that it was the girl Miriam who convinced her parents to have more children despite the Pharoah's decree to kill the firstborn of the Israelites. Thus, without Miriam, there would have been no Moses, and no Exodus.

The great medieval Jewish sage Rashi taught that the young Miriam assisted her mother as a midwife and was particularly skilled in calming newborns and infants with her soothing voice (Rashi on Exodus 1:15). On the other hand, she was not all sweetness. Miriam bravely demonstrated righteous indignation when, just a girl of five, she encountered the Pharaoh, saying: "Woe to this man, when God avenges him!" (Midrash Rabbah, Shemot 1:13)

Following Micah, the Talmud places Miriam on a par with Moses and Aaron in leadership: "There were three excellent leaders for Israel. They were Moses, Aaron and Miriam." While Moses and Aaron were leaders for all the people, "Miriam was the teacher of the women." (Taanit 9; Targum Micha 6:4) Seeing the suffering of her people in slavery, Miriam wept bitterly. She prayed unceasingly, and hoped for a better future. No one knew the bitterness of Egypt more than Miriam.

Miriam leads the women in song.

Rashi also taught that when Miriam led the women in their victory song, their singing was more profound than that of the men, for the women not only sang, but also played their tambourines and danced. Thus, the women's hearts were filled with greater joy than the men's (Rashi on Ex. 15:20).

Moreover, Miriam's death was directly connected to the lack of water at Kadesh. Her merit was so great that a well there, hidden under the infamous rock, dried up when Miriam the prophetess died. Rashi further taught that, just as the manna fell from heaven because of the merit of Moses and the Cloud of Glory enveloped the Israelites because of the merit of Aaron, the life-giving water that miraculously nourished them during their travels was due to the merit of Miriam.[2]

The rabbis knew that no human being was without sin. Even Moses sinned, and Aaron, so of course Miriam too sinned, in the matter of Moses' marriage to the Cushite woman. Miriam's skin turned white because she criticized Moses for marrying a black woman. But why was Miriam punished, and not Aaron? According to Leviticus 13, anyone with a skin disease was disqualified from the high priesthood. The Talmud thus notes that if Aaron had been punished as well as his sister, he would no longer have been able to perform his duties.

A separate question regards the identity of Moses' Cushite wife. Zipporah is identified as the wife of Moses, so the traditional Jewish and Christian view is that Zipporah is the wife in question. However, Zipporah is described as being a Midianite. According to Richard E. Friedman and other modern scholars, because Cush refers to Ethiopia, the "Cushite woman" of the story could not be Zipporah. Friedman, building on interpretations from the documentary hypothesis, notes that Zipporah is only mentioned in the Yahwist text, ("J"), while the story of the Cushite woman is assigned to the Elohist.[3]

In this theory, these two accounts reflect the stories of two rival priesthoods. The priesthood in the southern Kingdom of Judah claimed descent from Aaron and controlled the Temple of Jerusalem, while the priesthood based at Shiloh ministered in the northern Kingdom of Israel. According to Friedman, the Elohist supported the Shiloh priesthood, and thus had a strong motivation to repeat this story, which is aimed not so much at Miriam as at Aaron. It is also the Elohist, in opposition to the rival northern shrine at Bethel with its golden bull-calf statue, who tells the story of Aaron's creating the Golden Calf, while the Yahwist does not mention the incident.[4] The Yahwist, thought by some analysists to be a woman,[5] portrays Miriam only in a positive light.