Sousa composed at least 136 marches, many of which included innovative instrumental effects that became emblematic of the genre. Among his best known compositions are “The Washington Post” (1889), “The Liberty Bell” (1893), “Stars and Stripes Forever” (1897), and “Semper Fidelis” (1888), later adopted as the official march of the U.S. Marine Corps. He led the U.S. Marine Band to national prominence and later formed his own band, touring widely and popularizing many of the march tunes for which he was best known.

Sousa also composed several operettas and light orchestral works, as well as works of literature. Although he resisted recording his music until near the end of his life, his marches became among the most-recorded works in history.

Known as "The March King," Sousa held a deep-seated belief that his talent was a God-given gift and that he had a particular responsibility to use that gift in the service of noble ends. A man of personal integrity, Sousa tried, in the words of his band's road manager, William Schneider, "to be the most honorable person who ever walked the face of the earth."

His "The Stars and Stripes Forever" was designated as the national march of the United States on December 10, 1987. The low brass instrument known as the Sousaphone, now standard in college and high-school marching bands, was Sousa's creation. An American icon, Sousa is arguably the most well-known American composer. 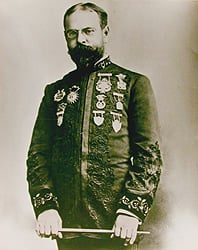 Sousa was born in Washington, D.C., to John António de Sousa and Maria Elisabeth Trinkhaus. His parents were of Portuguese, Spanish and Bavarian (German) descent; his grandparents were Portuguese refugees. When he started his music education playing the violin at the age of six, he was found to have absolute pitch.

When Sousa reached the age of 13, his father, a trombonist in the United States Marine Band, enlisted him in the Marine Corps as an apprentice. Serving for seven years until 1875, he apparently learned to play all the wind instruments while honing his skills with the violin. He also studied music theory during this time. He then joined a theatrical orchestra, where he learned to conduct.

Sousa returned to the U.S. Marine Band as its head in 1880 and remained as its conductor until 1892. During his tenure as the director, Sousa transformed the ensemble into an band of the highest musical standards. It was during this time that he composed many of his most popular marches, including The Gladiator, High School Cadets, El Capitan, Washington Post, and Semper Fidelis, which became the official march of the United States Marine Corps. Sousa and the Marine Corps Band, 1893

Sousa also introduced the Marine Band to the practice of performing the music of European classical composers via his arrangements of well-known classical works. He would also alter the configuration of the Marine Band to accommodate these compositions. As an orchestrator, he was not adverse to utilizing instruments that were not common in the standard military band, including the harp and a wide array of percussion instruments. The immense popularity of his concerts with the Marine Band led to its first tour in 1891, a tradition that has continued throughout the band's history.

Sousa organized his own band in 1892. Known as the Sousa Band, it quickly became the most prominent musical ensemble in the United States, a distinction it carried for nearly four decades. The band toured widely, representing the United States at the Paris Exposition in 1900 before touring Europe. During its illustrious history the Sousa Band performed over 10,000 concerts in hundreds of cities in the United States and abroad, helping to establish an American tradition of afternoon band concerts in public parks. Sousa took great interest in bringing musical performances of the highest quality to the public, and the Sousa Band was created in large part to accomplish this. The band was comprised of some of finest instrumentalists in the land including cornet player Herbert L. Clarke and trombonist Arthur Pryor. Flutist Merideth Wilson, composer of the Broadway musical, The Music Man, was also a member of the Sousa Band. The band was the first American ensemble to embark on a world tour.

In addition to composing marches, Sousa also delved into the realm of operetta and orchestral music. His operettas show a variety of French, Viennese and British influences. (In his younger days, Sousa made an orchestration of HMS Pinafore and played the first violin on the American tour of Jacques Offenbach.) The music of these operettas is light and cheerful. The Glass Blowers and Desirée have had revivals, the latter having been released on CD. El Capitan, which makes fun of false heroes and is the best known of these works, has been in production somewhere in the world ever since it was written. Marches and waltzes have been derived from many of these stage works. Sousa also composed the music for six operettas that were either unfinished or not produced: The Devils' Deputy, Florine, The Irish Dragoon, Katherine, The Victory, and The Wolf. In addition, Sousa wrote The Mikado March, the elegant overture of Our Flirtations, a number of musical suites, large-scale band compositions (Tales of the Traveler), and concert overtures.

Sousa conducted the Seventh Regiment Military Band at the opening of Yankee Stadium on April 18, 1923. For many years, Sousa refused to conduct on the radio, fearing a lack of personal contact with the audience. He was finally persuaded to do so in 1929 and became a huge success as a recording artist.

Other skills and personal life

Sousa exhibited many talents aside from music. He wrote five novels and a full length autobiography, Marching Along, as well as a great number of articles and letters-to-the-editor on a variety of subjects. His skill as a horseman met championship criteria. Sousa also ranks as one of the all-time great trapshooters, and he is enshrined in the Trapshooting Hall of Fame.

In 1905 Sousa published the book Pipetown Sandy, which included a satirical poem titled "The Feast of the Monkeys." In 1920 he wrote another work called The Transit of Venus, a humorous story about a group of misogynists called the Alimony Club who, as a way of temporarily escaping the society of women, embark on a sea voyage to observe the transit of Venus.

Sousa died on March 6, 1932, in his room at the Abraham Lincoln Hotel in Reading, Pennsylvania.

Marching band member with a Sousaphone

John Philip Sousa is arguably the best-known and most widely performed composer in the annals of American music. Perhaps no other American musician is associated so predominantly with the patriotic spirit of America. His march, The Stars and Stripes Forever, has been recognized by the United States government as "America's National March." Composed on Christmas Day in 1896, Sousa perform the march in almost all of his band's concerts and it was the last piece he conducted before he died in 1932.

Sousa possessed a strong conviction that attributes such as loyalty and honor were extremely important in life. He believed that being a musician was the noblest of professions.

Though Sousa himself decried the advent of recording technology, his music has been recorded by virtually every professional band in the United States and Europe, as well as many major symphony orchestras. There have been over 135 known recordings of The Stars and Stripes Forever alone. The United States Marine Band continues to perform and record his marches frequently.

The creation of the low brass instrument known as the Sousaphone was another of Sousa's contributions to the tradition of American band music. The modern Sousaphone is now the standard bass instrument in virtually every college and high-school marching band.

Sousa was also one of the leading proponents of making The Star Spangled Banner the national anthem of the United States, and his arrangement of the song remains one of the most popular.

In 1979, American band director and historian Keith Brion created "The New Sousa Band" as an homage to the "March King" with the intent to faithfully recreate the performing tradition of the original Sousa Band. Legendary choreographer George Ballanchine paid tribute to Sousa in his New York City Ballet production of Stars and Stripes.

He wrote 136 marches; some of his most popular are:

Sousa wrote school songs for only four Universities in the country (including Marquette University and the University of Minnesota). The marching brass bass, or Sousaphone, is named after him. 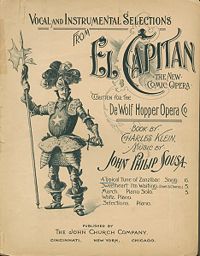 Retrieved from https://www.newworldencyclopedia.org/p/index.php?title=John_Philip_Sousa&oldid=1075226
Categories:
Hidden category:
This page was last edited on 3 August 2022, at 07:04.
Content is available under Creative Commons Attribution/Share-Alike License; additional terms may apply. See Terms of Use for details.