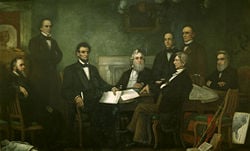 First Reading of the Emancipation Proclamation—Lincoln meets with his Cabinet.

The Emancipation Proclamation was a presidential order in 1863 that proclaimed freedom to all slaves in the Confederate States of America. It was not a law passed by a Congress but a proclamation written by the president alone based on the war powers given to the President by the Constitution.[1] It was a declaration by Abraham Lincoln on January 1, 1863, declaring the freedom of all slaves in the Confederate states which had seceded from the United States of America. Its immediate impact was enormous—every day as the Union armies advanced hundreds or thousands of slaves were liberated—until they were nearly all free in summer 1865. (The border states freed their own slaves, except Kentucky, where some slavery existed until December 1865.) Legally their emancipation was permanently effected by the Thirteenth Amendment ratified in December 1865.

The Emancipation Proclamation was never tested in court one way or the other, but no court or legal scholar has questioned its validity. Lincoln was initially reluctant to issue the proclamation, wanting the Civil War to be about preserving the union not about slavery, but his cabinet encouraged him to proceed.

Full civil liberty for African-Americans would take much longer to achieve, and the attitudes and beliefs that supported, slavery did not simply disappear after the North had won the war. These attitudes saw later expression in the Jim Crow laws (laws that segregated Blacks from Whites). However, the Proclamation was morally right and can be seen as explicating the true meaning of the famous words, "all men are created free... with certain unalienable rights" of the 1776 Declaration of Independence as applicable to Black men as well as to White men. It would not be until 1920 that these words were extended to include women. Jefferson, when he wrote the Declaration only had free white men in mind, but the true meaning of the words he used were inclusive, not exclusive. Had Lincoln not issued the statement, in the climate of reconstruction that followed the war, further concessions might have been made to enable the slave owners to keep their slaves. Morally, it was the right step at the right time.

How the Emancipation Proclamation was issued

The Proclamation was issued in two parts. The first part, issued on September 22, 1862, was a preliminary announcement outlining the intent of the second part, which officially went into effect January 3, 1863, during the second year of the American Civil War. It was Abraham Lincoln's declaration that all slaves would be permanently freed in all states that had seceded from the Union and that had not returned to federal control by January 1, 1863. The ten affected states were individually named in the second part. Not included were the Union slave states of Maryland, Delaware, Missouri and Kentucky. Specific exemptions were stated for West Virginia, and also for New Orleans and nearby areas already under Union control. That is, areas under Union control on January 1, 1863, were not affected. Lincoln did not think he had legal authority over these areas under his Constitutional war powers.

A strict application of the Fugitive Slave Law of 1850 could have required return of fugitive slaves to their masters, but on March 13, 1862, Lincoln forbade all Union army officers from returning fugitive slaves. On April 10, 1862, Congress declared that the federal government would compensate slave owners who freed their slaves. All slaves in the District of Columbia were freed in this way on April 16, 1862. On June 19, 1862, Congress prohibited slavery in United States territories, thus nullifying the 1857 decision of the Supreme Court in the Dred Scott v. Sandford case, which had ruled that Congress was powerless to regulate slavery in the territories.

In January 1862, Thaddeus Stevens, the Republican leader in the House, called for total war against the rebellion, arguing that emancipation would ruin the rebel economy. In July 1862 Congress passed, and Lincoln signed, the "Second Confiscation Act." It liberated the slaves held by rebels. Original Text. It provided:

SEC. 2. And be it further enacted, That if any person shall hereafter incite, set on foot, assist, or engage in any rebellion or insurrection against the authority of the United States, or the laws thereof, or shall give aid or comfort thereto, or shall engage in, or give aid and comfort to, any such existing rebellion or insurrection, and be convicted thereof, such person shall be punished by imprisonment for a period not exceeding ten years, or by a fine not exceeding ten thousand dollars, and by the liberation of all his slaves, if any he have; or by both of said punishments, at the discretion of the court. ...

Lincoln himself had declared in peacetime he had no constitutional authority to free the slaves. The war gave him war powers. Emancipation was still a risky political act, because of strong opposition among Copperhead Democrats, and the uncertain impact on loyal border states.[2] As such, the proclamation was a military order issued by Lincoln in his capacity as Commander-in-Chief, rather than the equivalent of a statute enacted by Congress, or a constitutional amendment. The Emancipation Proclamation also allowed for the enrollment of freed slaves into the United States military. Nearly 200,000 blacks did join, most of them ex-slaves. This gave the North an additional manpower resource that the South would not emulate until the final days before its defeat.

Lincoln first discussed the proclamation with his cabinet in July 1862, but he felt that he needed a Union victory on the battlefield so it would not look like a desperate effort. After the Battle of Antietam, in which Union troops turned back a Confederate invasion of Maryland, he issued a preliminary proclamation on September 22, 1862. The final proclamation was then issued in January of the following year.

The Emancipation Proclamation itself took effect only as the Union armies advanced into the Confederacy. Slaves in the border states (Delaware, Kentucky, Maryland, Missouri and West Virginia) were emancipated by separate state action (except Kentucky). Secretary of State William Seward commented on this by remarking, "We show our sympathy with slavery by emancipating slaves where we cannot reach them and holding them in bondage where we can set them free." Had any seceding state rejoined the Union before January 1, 1863, it could have kept slavery, at least temporarily.

Although implicitly granted authority by Congress, Lincoln used his powers as Commander-in-Chief of the Army and Navy, "as a necessary war measure" as the basis of the proclamation.

Booker T. Washington, as a boy of nine years, remembered the day in early 1865: 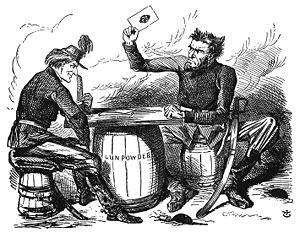 As the great day drew nearer, there was more singing in the slave quarters than usual. It was bolder, had more ring, and lasted later into the night. Most of the verses of the plantation songs had some reference to freedom.... Some man who seemed to be a stranger (a United States officer, I presume) made a little speech and then read a rather long paper—the Emancipation Proclamation, I think. After the reading we were told that we were all free, and could go when and where we pleased. My mother, who was standing by my side, leaned over and kissed her children, while tears of joy ran down her cheeks. She explained to us what it all meant, that this was the day for which she had been so long praying, but fearing that she would never live to see. (Up from Slavery, 1901, 19-21.)

Emancipation took place without violence by masters or ex-slaves. The proclamation represented a shift in the war objectives of the North—merely reuniting the nation would no longer become the sole outcome. It represented a major step toward the ultimate abolition of slavery in the United States and the formation of a "more perfect Union."

In the military, the reaction to this proclamation varied widely, with some units coming to near mutiny in protest, and desertions were reported because of it. On the other hand, other units were inspired with the adoption of a cause that seemed to them to ennoble their efforts, such that at least one unit took up the motto "For Union and Liberty."

Slaves had been part of the "engine of war" for the Confederacy. They produced and prepared food; sewed uniforms; repaired railways; worked on farms and in factories, shipping yards, and mines; built fortifications; and served as hospital workers and common laborers. News of the Proclamation spread rapidly by word of mouth, arousing hopes of freedom, creating general confusion, and encouraging many to escape. 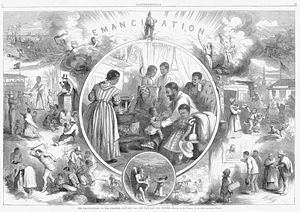 Abroad, as Lincoln hoped, the Proclamation turned foreign popular opinion in favor of the Union for its new commitment to end slavery. That shift ended any hope the Confederacy might have had of gaining official recognition, particularly with Britain. If Britain or France, both of which had abolished slavery, continued to support the Confederacy, it would seem as though they were supporting slavery. Prior to Lincoln's decree, Great Britain's actions had favored the confederacy, especially in its construction of war ships such as the CSS Alabama and CSS Florida. As Henry Adams noted, "The Emancipation Proclamation has done more for us than all our former victories and all our diplomacy." Giuseppe Garibaldi hailed Lincoln as "the heir of the aspirations of John Brown." Workers from Manchester, England wrote to Lincoln saying, "We joyfully honor you for many decisive steps toward practically exemplifying your belief in the words of your great founders: 'All men are created free and equal.'"

Near the end of the war, Republican abolitionists were concerned that the Emancipation Proclamation would be construed solely as a war act and thus unconstitutional once fighting ended. They were also increasingly anxious to secure the freedom of all slaves, not just those freed by the Emancipation Proclamation. Thus pressed, Lincoln staked a large part of his 1864 presidential campaign on a constitutional amendment to abolish slavery uniformly throughout the United States. Lincoln's campaign was bolstered by separate votes in both Maryland and Missouri to abolish slavery in those states. Maryland's new constitution abolishing slavery took effect in November 1864. Winning re-election, Lincoln pressed the lame-duck 38th Congress to pass the proposed amendment immediately rather than wait for the incoming 39th Congress to convene. In January 1865, Congress sent to the state legislatures for ratification what became the 13th Amendment, banning slavery in all U.S. states and territories. The amendment was ratified by the legislatures of enough states by December 6, 1865. As a practical matter, by the time that the amendment was ratified, Kentucky was the only remaining state in the nation where there were still some slaves who had not already been freed by other means. In The Emancipation Proclamation: Three Views (2006), Edna Greene Medford argues that the people most affected by the Proclamation, read it as offering much more than it delivered. They saw it as offering them meaningful equality but in fact discrimination, violence and poverty continued. Later, it came to represent broken promises.