The Lincoln Memorial, on the extended axis of the National Mall in Washington, D.C., is a United States Presidential Memorial built for President Abraham Lincoln.

The building is in the form of a Greek Doric temple, housing a large seated sculpture of Lincoln in marble and inscriptions of two of Lincoln's famous speeches. The memorial has been the site of many other well-known speeches, including Martin Luther King's "I Have a Dream" speech, delivered on August 28, 1963, during the rally at the end of the March on Washington for Jobs and Freedom. 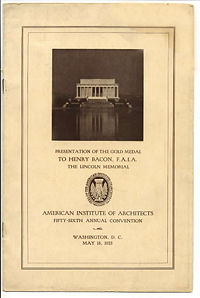 The Lincoln Monument Association was incorporated by the United States Congress in March 1867 to build a memorial to Lincoln. Little progress was made until the site was chosen in 1901, in an area that was swampland. Congress formally authorized the memorial on February 9, 1911, and the first stone of the Lincoln Memorial was not put into place until Lincoln's birthday, February 12, 1914. The monument was dedicated by Warren G. Harding on May 30, 1922, attended by the former President's only surviving child, Robert Todd Lincoln. It won for its architect, the prominent Beaux-Arts designer Henry Bacon, the Gold Medal of the American Institute of Architects, his profession's highest honor, presented at the Monument in 1923. The stone for the building is Indiana limestone and Colorado Yule marble, quarried at the town of Marble, Colorado. The sculpture itself is made of Georgian marble. Originally under the care of the Office of Public Buildings and Public Parks, it was transferred to the National Park Service on August 10, 1933.

Standing apart from the somewhat triumphal and Roman manner of most of Washington, the memorial takes the severe form of a Greek Doric temple. It is 'peripteral,' with 36 massive columns, each 33 feet high, entirely surrounding the cella of the building itself, which rises above the porticos. Five adults holding hands cannot quite embrace the columns. Architect Henry Bacon spent several years studying in Europe and was very fond of the architecture found in ancient Greece. He therefore chose to model the memorial after the Parthenon in Greece. By a happy afterthought, the 36 columns required for the design were seen to represent the 36 states of the Union at the time of Lincoln's death, and their names were inscribed in the entablature above each column. The names of the 48 states of the Union when the Memorial was completed are carved on the exterior attic walls, and a later plaque commemorates the admission of Alaska and Hawaii. 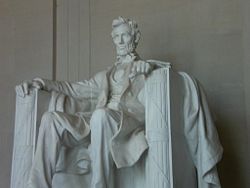 The interior features a three-chamber design, with the central chamber containing a statue of the president and two flanking chambers housing the speeches Lincoln during his presidency. The focus of the memorial is Daniel Chester French's sculpture of Lincoln, seated. French studied many of Mathew Brady's photographs of Lincoln to determine his personality, and found that Lincoln's most unique qualities were his strength and compassion. He depicted the president as worn and pensive, gazing eastwards down the Reflecting Pool at the capital's starkest emblem of the Union, the Washington Monument. One hand is clenched, the other open. The clenched hand is meant to represent his strength and determination to see the war ended successfully, while the open hand is supposed to represent his warm and compassionate nature. It is said that French, who had a hearing-impaired daughter, carved Lincoln's hands to sign the letters "A" and "L" in American Sign Language. Beneath his hands, the Roman fasces, symbols of the authority of the Republic, are sculpted in relief on the seat. The statue stands 19 feet tall and 19 feet wide, and was carved by the Piccirilli Brothers of New York City in a studio in the Bronx from 28 blocks of white Georgia marble. The central cella is flanked by two others. In one, the Gettysburg Address is inscribed on its south wall, and in the other, Lincoln's second inaugural address is inscribed on its north wall. Above the text of these speeches are a series of murals by Jules Guerin showing an angel, representing truth, freeing a slave (on the south wall, above the Gettysburg Address), and the unity of the American North and South (above the Second Inaugural Address). On the wall behind the statue, visible over the statue's head, is this dedication: 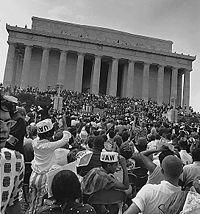 The Lincoln Memorial on a $5 bill.

In 1939, the singer Marian Anderson was refused permission to perform at Constitution Hall in Washington because of her skin color. At the suggestion of Walter White, the executive secretary of the National Association for the Advancement of Colored People, Harold L. Ickes, the Secretary of the Interior, arranged for Anderson to perform from the steps of the Lincoln Memorial, to a live audience of 70,000, and a nationwide radio audience.

On August 28, 1963, the monument grounds were the site of one of the greatest political rallies in American history, the March on Washington for Jobs and Freedom which proved to be a high point of the American Civil Rights Movement. Numerous speeches have been given in front of the building, including Martin Luther King's greatest, "I Have a Dream." It is estimated that approximately 250,000 people came to witness this speech and that the crowd stretched back to the entrance of the present World War II Memorial. A marked tile on the memorial steps shows where Dr. King stood.

The site has had its share of unusual events including President Bush's 2001 inauguration ceremony dance troupe The Rockettes kicking while marching down the monument's steps.

On November 27, 2006, the Memorial was partially closed when a suspicious liquid was found in a bathroom. Also found was an "anthrax threat letter," according to authorities at the Memorial.

Images of the memorial 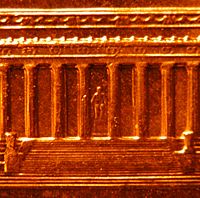 The Lincoln Memorial is shown on the reverse of the United States penny. In his treatise Theory and Practise of Numismatic Design, Steve Crooks states that because the Lincoln Memorial is shown in sufficient detail to discern the statue of Lincoln on the reverse of the penny, Abraham Lincoln is the only person to be depicted on both the obverse and reverse of the same United States coin. This held true until 1999 when the New Jersey state quarter was released depicting George Washington crossing the Delaware River on its reverse. Another incident occurred in 2006 when South Dakota's quarter was released, depicting Mount Rushmore.

The Lincoln Memorial is on the back of the United States five dollar bill, which bears Lincoln's portrait on the front.

Other Lincoln memorials in Washington, D.C.

The Lincoln Memorial was preceded by three earlier remarkable memorials to Lincoln in the capital.

The first Lincoln statue in the United States, in front of what was the first City Hall was unveiled on April 15, 1868, the third anniversary of Lincoln's death, by his successor, Andrew Johnson. It was paid for by the citizens of Washington, D.C. Lot Flannery, the Irish sculptor, who claimed he knew Lincoln and was present at the theater when Lincoln was assassinated. The memorial was meant not only to commemorate Lincoln but remind the public of his authorization of up to one million U.S.D. to pay loyal D.C. slaveholders for their human property. This initiative reflected Lincoln's need to balance the drive towards the end of slavery with his dependency on the loyalty of the citizens of D.C. to the Union. The statue was taken down in 1919, but was restored to its original location after considerable controversy in 1923.

A Lincoln statue was dedicated inside the Rotunda of the United States Capitol on January 25, 1871, in the presence of Ulysses S. Grant. While still a teenager, sculptress Vinnie Ream began preliminary sketches of Lincoln during the last five months of his life. She became the first woman to receive a commission from Congress to create a statue for the Rotunda. To accurately render the statue's garments, she borrowed the clothes Lincoln wore the night of his assassination.

The Emancipation Memorial (also known as "Freedom's Memorial") (1876) in Lincoln Park on Capitol Hill portrays a kneeling man representing the last man captured under the Fugitive Slave Law, who snaps slavery's chains as Lincoln proffers the Emancipation Proclamation. Freed black slaves raised all the funds to erect it. The initiative came from Charlotte Scott, of Virginia, who donated the first five dollars she earned as a free American. Archer Alexander, himself a former slave, posed as the model for the slave in the statue.