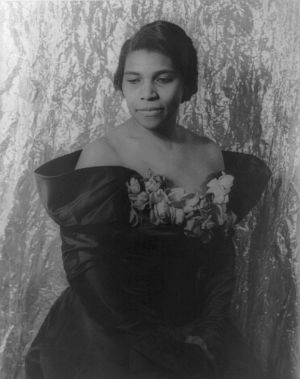 Marian Anderson (February 27, 1897 – April 8, 1993) was an African-American contralto, best remembered for her performance on Easter Sunday, 1939, on the steps of the Lincoln Memorial in Washington D.C..

Overcoming the odds of poverty, racism and the loss of her father at a young age, she persevered to become one of the most beloved singers of her day.

Experiencing firsthand the scourge of racism in America and saddened by racial inequalities, she did not take the role as an active, aggressive opponent of racism. Rather, she chose to educate and enlighten her listeners through the example of her own life. She maintained her dignity and grace, allowing those qualities to fight the ignorance of which prejudice is born. Anderson became a great advocate and role model for African-American musicians, never seeming to give up hope for the future of both her people and her country.

Marian Anderson was born in Philadelphia, Pennsylvania. Throughout her life she gave her birth date as February 17, 1902, but her death certificate records her birth date as February 27, 1897 and there is photograph taken of her as an infant that is dated 1898.[1] She was the oldest of three daughters born to John and Anna Anderson. Her father was a loader at the Reading Terminal Market, while her mother was a former teacher, having taught in Virginia. In 1912, her father suffered a head wound at work and died soon after. Marian and her two sisters, along with their mother moved in with her father's parents. Her mother found work cleaning, laundering, and scrubbing floors.

At the age of six, Marian joined the junior choir at the Baptist Church in which her father was very active. Soon she was nicknamed "The Baby Contralto." When Marian was eight years old her father had bought a piano from his brother, but they could not afford to pay for lessons. This however, did not deter Marian and she began teaching herself to play.

Marian joined the senior choir at her church when she was 13 years old. She soon began visiting other churches, through which she became well-known for her vocal abilities. She began accepting invitations to sing, sometimes performing at three different places in a single night. She eventually summoned the confidence to request five dollars per performance.

At the age of 15, Marian began voice lessons with Mary Saunders Patterson, a prominent black soprano. Shortly thereafter, the Philadelphia Choral Society held a benefit concert, providing $500 for her to study for two years with leading contralto Agnes Reifsnyder.[2]

Marian attended William Penn High School until her music vocation arose. She transferred to South Philadelphia High School, focusing on music and singing frequently at assemblies, graduating at age 18. She applied for admission to a local music school, but was coldly rejected because of her color. Reflecting on that experience, Marian later stated:

"I don't think I said a word. I just looked at this girl and was shocked that such words could come from one so young. If she had been old and sour-faced I might not have been startled. I cannot say why her youth shocked me as much as her words. On second thought, I could not conceive of a person surrounded as she was with the joy that is music without having some sense of its beauty and understanding rub off on her. I did not argue with her or ask to see her superior. It was as if a cold, horrifying hand had been laid on me. I turned and walked out."

Her former high school principal enabled her to meet Guiseppe Boghetti, a much sought-after teacher. He was reportedly moved to tears during the audition, when Marian performed "Deep River."[3] 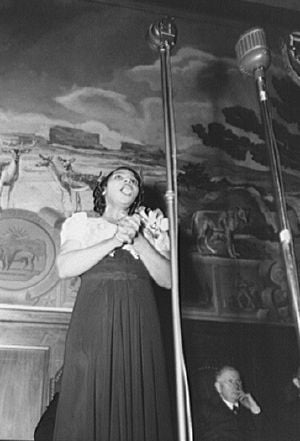 Anderson performing at the Department of the Interior, in a commemoration of her 1939 concert.

Anderson began to tour regionally, focusing on black colleges and churches in the South. In 1919, at the age of 22, she sang at the National Baptist Convention. Gaining knowledge and confidence with each performance, on April 23, 1924, she dared her first recital at New York's Town Hall. However, she was uncomfortable with foreign languages and critics found her voice lacking. This discouraging experience nearly caused her to end her vocal career.

However, her confidence was soon bolstered when, while studying under Boghetti, she was granted the opportunity to sing at the Lewisohn Stadium in New York by entering a contest sponsored by the New York Philharmonic Society. She entered the Lewisohn Stadium competition in 1925. She came in first among 300 rivals and sang in New York’s amphitheater with the accompaniment of the Philharmonic Orchestra. The success of this concert gained her the attention of Arthur Judson, an important impresario, who put her under contract.

In 1926, Marian toured the East Coast and Southern states, adding songs to her repertoire. She performed a solo recital at Carnegie Hall on December 30, 1928. A New York Times critic wrote: “A true mezzo-soprano, she encompassed both ranges with full power, expressive feeling, dynamic contrast, and utmost delicacy.”[4] However, Ms. Anderson's popularity was not catching on with mainstream America; she was still performing mainly for black audiences.

The National Association of Negro Musicians awarded Marian a scholarship to study in Britain. On September 16, 1930, she performed at London’s Wigmore Hall. She returned only briefly to the United States. A scholarship was granted to Marian from the Julius Rosenwald Fund, which allowed her to broaden her training to include England, France, Belgium, Holland, the former Soviet Union, and Scandinavia.

Anderson was intent on perfecting her language skills (as most operas were written in Italian and German) and learning the art of lieder singing. At a debut concert in Berlin, she attracted the attention of Rule Rasmussen and Helmer Enwall, managers who arranged a tour of Scandinavia. Enwall continued as her manager for other tours around Europe.[5]

In 1935, Anderson's performance at the Salzburg festival earned her worldwide recognition and a compliment from the Italian conductor, Arturo Toscanini, who told her, "a voice like yours is heard only once in a hundred years."[6]

The Finnish composer Jean Sibelius dedicated his Solitude to her. In 1935 impresario Sol Hurok took over as her manager and was with her for the remainder of her performing career.

Did you know?
Marian Anderson broke the color barrier by becoming the first African-American to perform with the New York Metropolitan Opera in 1955

In 1939, the Daughters of the American Revolution (DAR) refused to allow Anderson to sing to an integrated audience in Constitution Hall because of her race. The District of Columbia, then under the control of the Congress and President Franklin D. Roosevelt, also banned her for the same reason, from using the auditorium of a white public high school. As a result of the furor which followed, thousands of DAR members, including the President's wife, Eleanor Roosevelt, resigned.

Ironically, neither Eleanor Roosevelt nor her husband, Franklin Roosevelt, had used their influence in a similar way when the school board turned down Anderson.

Finally, at the suggestion of Walter White, the executive secretary of the NAACP, Secretary of Interior Harold L. Ickes organized an open air concert for Anderson on the steps of the Lincoln Memorial. The concert, which commenced with a dignified and stirring rendition of "My Country, 'Tis of Thee" attracted an integrated crowd of 75,000 and a much larger radio audience.

In 1943, Anderson sang at the invitation of the DAR to an integrated audience at Constitution Hall as part of a benefit for the American Red Cross. By contrast, the federal government continued to bar her from using the high school auditorium in the District of Columbia.

On January 7, 1955, Anderson broke the color barrier by becoming the first African-American to perform with the New York Metropolitan Opera. On that occasion, she sang the part of Ulrica in Giuseppe Verdi's Un ballo in maschera. The occasion was bittersweet as Anderson, at age 58, was no longer in her prime vocally.

In 1958, Anderson was officially designated delegate to the United Nations, a formalization of her role as "goodwill ambassador" of the U.S. she played earlier, and in 1972 she was awarded the United Nations Peace Prize.

After an extensive farewell tour, Marian Anderson retired from singing in 1965. However, she continued to appear publicly, narrating Copland's "A Lincoln Portrait," including a performance with the Philadelphia Orchestra at Saratoga in 1976, conducted by the composer.

Her achievements were recognized and honored with many prizes, including the Kennedy Center Honors in 1978 and a Grammy Award for 'Lifetime Achievement' in 1991. She received approximately fifty honorary doctoral degrees, beginning in 1938 with a Doctor of Music degree awarded by Howard University, and including degrees from Fordham University, Harvard University, Temple University, University of Bridgeport, and Ewha Womans University in Seoul, South Korea.[7]

In 1993, Anderson died of natural causes at the age of 95 in Portland, Oregon at the home of her nephew, the conductor James DePreist. She is interred at Eden Cemetery, a historic African-American cemetery located in Collingdale, Delaware County, Pennsylvania, near her hometown of Philadelphia.

Racism in the United States played a large role in Miss Anderson's life and career. During her tours she experienced racial prejudice on a daily basis, being denied access to lodging facilities and restaurants. Recognizing the unique position she held, she chose not to respond to injustices as an active, aggressive opponent of racism. She believed that the greatest role she could play would be as a model of integrity, enlightening her listeners through the example of her own life and actions. She became a great advocate and role model for African-American musicians. She believed that the life of her people would improve as the ideals of her country would slowly transform the system.[8]

The 1939 documentary film, Marian Anderson: the Lincoln Memorial Concert was selected for preservation in the United States National Film Registry.

On January 27, 2005, a commemorative U.S. postage stamp honored Marian Anderson with her image on the 37¢ issue as part of the Black Heritage series. Anderson is also pictured on the $5,000 Series I United States Treasury Savings Bond.

Anderson is a recipient of the Silver Buffalo Award, the highest adult award given by the Boy Scouts of America.

Retrieved from https://www.newworldencyclopedia.org/p/index.php?title=Marian_Anderson&oldid=1085966
Categories:
Hidden category:
This page was last edited on 6 November 2022, at 04:12.
Content is available under Creative Commons Attribution/Share-Alike License; additional terms may apply. See Terms of Use for details.