Maria Theresa (May 13, 1717 – November 29, 1780) was (reigning) Archduchess of Austria and Queen of Hungary and Bohemia, and, through her marriage, Holy Roman Empress.

She was the eldest daughter of Emperor Charles VI, who promulgated the Pragmatic Sanction to allow her to succeed to the Habsburg monarchy, and Elisabeth Christine of Brunswick-Wolfenbüttel. Opposition to her acceding to the throne led to the War of the Austrian Succession in 1740. After Emperor Charles VII, who claimed the throne, died in 1745, Maria Theresa obtained the imperial crown for her husband, Francis I. Though she was technically empress consort, Maria Theresa was the de facto ruler of the nation, and she began styling herself Holy Roman Empress in 1745.

Maria Theresa helped initiate financial and educational reforms, promoted commerce and the development of agriculture, and reorganized the army, all of which strengthened Austria's resources. Continued conflict with the Kingdom of Prussia led to the Seven Years' War and later to the War of the Bavarian Succession. She became dowager empress after the death of Francis and the accession of her son Joseph as emperor in 1765. Maria Theresa criticized many of Joseph's actions but agreed to the First Partition of Poland (1772). Maria Theresa was a key figure in the power politics of eighteenth-century Europe who brought unity to the Habsburg Monarchy and was considered one of its most capable rulers. Not only did she successfully fulfill her public duties but she also at the same time bore and brought up 16 children including Marie Antoinette and Leopold II. By doing so she became a role model for many women.

Maria Theresa was born in Vienna as the eldest daughter of Charles VI, Holy Roman Emperor and Elisabeth Christine of Brunswick-Wolfenbüttel, whose sole male heir–his son Leopold Johann–died as an infant in 1716. In 1713 Charles issued the Pragmatic Sanction which guaranteed his daughter the right to succeed to the Austrian throne and inherit his united lands on his death. Initially, many Northern European monarchs agreed to the Pragmatic Sanction when it was issued. One of the few not to sign was Frederick the Great of Prussia who, soon after Maria Theresa assumed the throne upon Charles' death on October 20, 1740, began the War of Austrian Succession.

Maria Theresa was married to Francis I, Duke of Lorraine. Maria Theresa was one of the few people in her age who married for love. She loved her husband dearly and passionately. She had 16 children by him, with 11 daughters (ten of whom had the first name "Maria") and five sons. Her youngest daughter was Maria Antonia, better known under her French name Marie Antoinette, who would be promised in marriage to the later King Louis XVI of France. After her husband's death, Maria Theresa made her son Joseph II co-regent of her Austrian dominions, but she actually kept most of the power to herself, which led to tension between her and her son. It was not until her death that Joseph could fully exercise his powers. 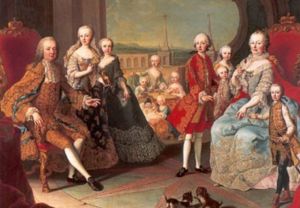 Maria Theresa with her family

First years: wars during her reign 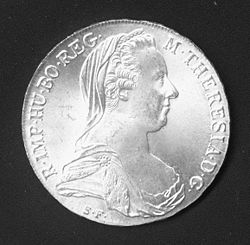 "The world's most famous coin," a silver thaler of Maria Theresa, dated 1780.

Maria Theresa's father had not given her any training in government, leaving her to learn for herself. Additionally, the army was weak and the treasury depleted as a result of two wars near the end of her father's reign.

The War of the Austrian Succession began when Frederick II of Prussia invaded and occupied Silesia. While Bavaria and France also invaded Austria's western territories, it was "Frederick the Great" who became Maria Theresa's primary foe during her reign. Therefore, she focused her internal and external policies towards the defeat of Prussia, which would help her regain the lands which had been taken from Austria. In the Treaty of Aix-la-Chapelle (1748), France gave the Austrian Netherlands that it conquered back to Maria Theresa. In exchange, Maria Theresa ceded Parma, Piacenza, and Guastalla to the Infante Philip of Spain. By giving up these lands, Maria Theresa revealed her vulnerability. After having been defeated in the First and Second Silesian Wars, Maria Theresa began to modernize her realms with the assistance of Friedrich Wilhelm Graf von Haugwitz. Defeat, however, reduced her morale and effectiveness as a ruler. She increased the size of the army by 200 percent and increased taxes in order to guarantee a steady income for the government, and in particular for the military. She centralized the government by combining the Austrian and Bohemian chancelleries, formerly separate, into one administrative office. Before these changes, justice and administration had been overseen by the same officials—afterwards, she created a supreme court with the sole responsibility of upholding justice in her lands. These reforms strengthened the economy and the state in general.

Maria Theresa, like the other Habsburgs, was a devout Roman Catholic. She was educated by Jesuits at Mariazell, and in later life lacked the religious cynicism of royal contemporaries such as Frederick II of Prussia. Her conservative outlook involved an intolerant view of other faiths. In 1741, she expelled the Jews from Prague. Her political distrust of Great Britain rested in part on her view of the established Church of England, whom she regarded as Protestant heretics.

Maria Theresa dropped Great Britain as an ally on the advice of her state chancellor, Wenzel Anton von Kaunitz, and allied with Russia and France. She established the Theresian Military Academy (the first worldwide) in 1752 and an academy of engineering science in 1754. She also demanded that the University of Vienna be given money to make the medical faculty more efficient. When she felt her army was strong enough, she prepared an attack on Prussia in 1756. However, it was Frederick II who attacked first, invading Saxony, another ally of Austria, thus initiating the Seven Years' War. The war ended in 1763 when Maria Theresa signed the Treaty of Hubertusburg, recognizing Prussian ownership of most of Silesia. 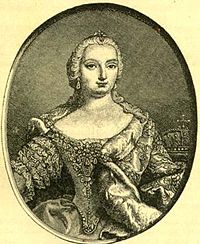 Maria Theresa I of Austria

Her husband Francis died two years later. Maria Theresa's devotion to him was so great that she dressed in mourning clothes until her own death 15 years later. During this time, she became more closeted from her people. Her focus changed from attempting to regain Silesia to maintaining the peace. She also recognized Joseph II, her eldest son, as coregent and Emperor. However, she allowed him only limited powers because she felt that he was too rash and arrogant.

In the 1760s, smallpox claimed several victims in the royal family. Maria Theresa was infected and received last rites in 1767, although she recovered. Afterward, Maria Theresa became a strong supporter of inoculation (a predecessor immunization method to smallpox vaccination), setting a strong example by requiring all of her children to be inoculated.

In the later years of her reign, Maria Theresa focused on reforming laws as an enlightened monarch. Many historians agree that she did not solely act out of care for her population, but rather to strengthen the economy of the Habsburg territories, especially after the loss of Silesia.

In 1771, she and Joseph II issued the Robot Patent, a reform that regulated a serf's labor payments in her lands, which provided some relief. Other important reforms included outlawing witch-burning and torture, and, for the first time in Austrian history, taking capital punishment off the penal code, as it was replaced with forced labor. It was later reintroduced, but the progressive nature of these reforms remains noted. Mandatory education was introduced in 1774; the goal was to form an educated class from which civil servants could be recruited.

Another installation of Maria Theresa's was a decency police which was to patrol everywhere, especially Vienna, and apprehend anyone suspected of doing something that could be deemed indecent (possibly due to her husband's supposed infidelity). Arrested prostitutes, for example, would be sent into villages in the eastern parts of the realm, leading some contemporary writers to note that these villages had 'exceptionally beautiful women' living there.

Maria Theresa died in Vienna in 1780, the only female to rule during the 650-year-long Habsburg dynasty. She is buried in tomb number 56 in the Imperial Crypt in Vienna. Her son Joseph II succeeded her. She was a very strong willed woman and was a very influential leader. 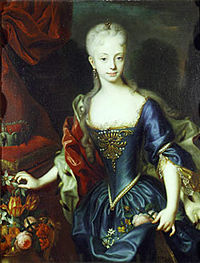 Maria Theresa as a child.

Silver coins bearing the image of Empress Maria Theresa became the common currency in many parts of the world during colonial times.[1]

Titles from birth to death

Maria Theresa was actually proclaimed King, rather than Queen, of Hungary upon her ascension to the Hungarian throne. Normally, however, she was styled Queen of Hungary.