Daughters of the American Revolution

The Daughters of the American Revolution, or DAR, is a lineage-based membership organization for the descendants of those who aided the fight for American independence. It was organized in 1890, when the Sons of the American Revolution refused entry to women. The DAR's motto is "God, Home, and Country." The society is dedicated to historic preservation, education, and the promotion of national patriotism. DAR educational divisions are often involved in raising funds for local scholarships and educational awards, and work to preserve various historical properties and artifacts that foster patriotism. The DAR maintains chapters in all fifty of the United States as well as in the District of Columbia. There are also DAR chapters within Australia, Canada, France, Germany, Italy, Japan, Mexico, Spain, and the United Kingdom. Famous members have included Susan B. Anthony, Clara Barton, and Grandma Moses.

The organization faced controversy on several occasions over its discriminatory practices. Marian Anderson, a renowned black singer, was refused permission to perform at Constitution Hall, leading to the resignation of Eleanor Roosevelt from the society. An apology was later made and she was welcomed at Constitution Hall for several concerts. Publicity regarding a black woman being denied membership in the DAR, despite satisfying the lineage requirements, finally led to the adoption of a statement in the organization's bylaws to bar discrimination “on the basis of race or creed,” acknowledging the significant role played by those of all races and faiths in the founding of the United States, making it a unique nation with a special role in the world.

The Daughters of the American Revolution or DAR is a female volunteer organization aimed at promoting patriotism, preserving American history, and aiding America’s future through the betterment of youth education. The organization raises funds to provide financial aid and educational scholarships to deserving and underprivileged students. Members of the organization also work toward the accurate preservation of history and various historical artifacts. The organization is home to one of the United States' premier genealogical libraries, and displays one of the largest collections of pre-industrial American decorative arts. The organization’s annual national meeting, known as the Continental Congress, attracts more than 4,000 members to its Washington, DC headquarters each year. 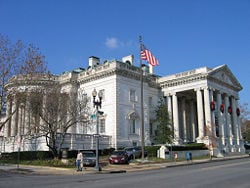 The Daughters of the American Revolution was founded on October 11, 1890, by Eugenia Washington, Mary Desha, Mary Lockwood, and Ellen Hardin, all self-supporting single women devoted to the preservation of American independence. The organization was formed after the Sons of the American Revolution refused entry to women. DAR’s founding mothers responded by establishing a female chapter on the October 11 anniversary of the discovery of America. In the first year, more than 800 women joined the organization. The women’s first project undertaken was to assist in the completion of the monument to Mary Washington, the mother of U.S. President George Washington. DAR contributions accounted for almost three quarters of the entire project funding.

A Congressional Charter recognized the society on December 2, 1896. By 1909, construction was completed on the first of the society’s three buildings, Washington, DC’s Memorial Continental Hall. In 1910, the DAR began work to stimulate national patriotism by aiding immigrants in becoming legal citizens, later publishing the DAR Manual for Citizenship. Throughout the 1920s, the Daughters also maintained a controversial but strict opposition to the American pacifist movement which followed World War I; the organization also maintained a public anti-communist position throughout the Cold War.

By 1923, construction was complete on the DAR administration building and by 1929, the renowned Constitution Hall was unveiled. In 1941, the society unveiled an extensive collection of historic manuscripts and imprints from the colonial and revolutionary periods entitled the Americana Collection. In 1973, Memorial Continental Hall was designated a national historic landmark, followed by Constitution Hall in 1985.

By the late twentieth century, DAR membership totaled more than 180,000 with more than 3,000 local chapters, making it the largest women’s patriotic hereditary society in existence. Since its founding, the organization has assisted in the preservation of various historic landmarks including the memorial of Jamestown, the marking of early pioneer trails, and the restoration of the Statue of Liberty. The society has also preserved and collected more than 33,000 decorative and fine arts objects housed in the DAR Museum in Washington, DC.

The headquarters of the Daughters of the American Revolution consists of three buildings housing the general divisions including historical, educational, and patriotic divisions. The DAR’s historical division places an emphasis on the study of U.S. history and the preservation of Americana. Its educational division provides scholarships and loans for eligible students, supports school efforts for underprivileged youth, sponsors numerous essay contests, and offers scholarship awards. The DAR’s patriotic division is responsible for the publication of DAR Magazine and the DAR National Defender.

The President General and an executive board of eleven national officers lead the national society. Social policies are organized by a National Board of Management which meets six times each year at the Washington, D.C. headquarters. The Continental Congress, or the DAR’s annual national meeting, attracts more than 4,000 members each year.

Membership in the Daughters of the Revolution is open to women at least eighteen years of age who can prove lineal bloodline descent from an ancestor who aided in achieving United States independence.[1] Acceptable ancestors can include signers of the United States Declaration of Independence, military veterans of the American Revolutionary War, including French or Spanish soldiers who aided the American cause, civil servants of state governments or members of the Continental Congress. Acceptable ancestors may also include signers of the Oaths of Allegiance, participants in the Boston Tea Party, and any doctors, nurses, ministers, and petitioners who aided the revolutionary cause. The DAR does not discriminate based on race or religion, and welcomes all women with a traceable bloodline to revolutionary ancestors. An adopted daughter of a revolutionary descendant does not qualify through an adoptive parent but only through the bloodline of a birth parent.[2]

Today the DAR forbids discrimination in membership based on race or creed. However, in 1932, the organization adopted a rule excluding African-American artists from the stage at Constitution Hall.[3] In 1936, Sol Hurok, the manager of African-American contralto Marian Anderson, attempted to book the singer for a concert at Constitution Hall. Due to the organization’s discriminatory policy, the booking was refused. Instead, Anderson was forced to perform at a local black high school. In 1939, Hurok, along with the NAACP and Howard University, petitioned the DAR to make an exception to their discriminatory policy for a new booking of Marian Anderson at Constitution Hall. The DAR refused, forcing Hurok to attempt a second booking at an all white high school. The District of Columbia public school board responded by subsequently refusing to allow any black artists to perform there as well. When hearing of the incident, first lady Eleanor Roosevelt, a longtime DAR member, publicly resigned from the organization and invited Anderson to perform before her and President Roosevelt at the Lincoln Memorial. Upon her resignation, the first lady sent the following letter to the society:

I am afraid that I have never been a very useful member of the Daughters of the American Revolution. I know it will make very little difference to you whether I resign, or whether I continue to be a member of your organization. However, I am in complete disagreement with the attitude taken in refusing Constitution Hall to a great artist. You have set an example, which seems to me unfortunate, and I feel obliged to send in to you my resignation. You had an opportunity to lead in an enlightened way and it seems to me that your organization has failed. I realize that many people will not agree with me, but feeling as I do this seems to me the only proper procedure to follow. Very sincerely yours, Eleanor Roosevelt.[4]

In later years, the DAR apologized to the singer and her manager, and welcomed Anderson to Constitution Hall on a number of occasions including a benefit concert for World War II relief in 1942.[5] In 1964, Anderson chose Constitution Hall as the place where she would launch her farewell American tour. On January 27, 2005, the DAR hosted a dedication ceremony of the Marian Anderson commemorative stamp with the U.S. Postal Service.[6]

In March 1984, a new controversy erupted when Lena Lorraine Santos Ferguson said she had been denied membership in a Washington chapter of the DAR because she was black. In a March 12, 1984, Washington Post story,[7] reporter Ronald Kessler quoted Ferguson’s two white sponsors, Margaret M. Johnston and Elizabeth E. Thompson, as saying that although Ferguson met the lineage requirements and could trace her ancestry to Jonah Gay, who helped the Revolutionary War effort as a member of a Friendship, Maine, town committee, fellow DAR members told them that Ferguson was not wanted because she was black.

What caused a sensation was a quote from Sarah M. King, the president general of the DAR. King told Kessler that each of the DAR’s more than 3,000 local chapters decides if it wishes to accept members:

Being black is not the only reason why some people have not been accepted into chapters. There are other reasons: Divorce, spite, neighbors’ dislike. I would say being black is very far down the line…. There are a lot of people who are troublemakers. You wouldn’t want them in there because they could cause some problems.

After those comments more publicity erupted, and the D.C. City Council threatened to revoke the DAR’s real estate tax exemption. King acknowledged that Ferguson should have been admitted and said her application to join the DAR was handled “inappropriately.” The DAR changed its bylaws to bar discrimination “on the basis of race or creed.” King announced a resolution to recognize “the heroic contributions of black patriots in the American Revolution.”

As a result, not only was Ferguson, a retired school secretary, admitted to the DAR, she became chairman and founder of the D.C. DAR Scholarship Committee: “I wanted to honor my mother and father as well as my black and white heritage,” Mrs. Ferguson told Kessler after being admitted. “And I want to encourage other black women to embrace their own rich history, because we’re all Americans.”

Constitution Hall is also home to the organization’s annual convention. Designed by architect John Russell Pope, the hall seats approximately 4,000 people and is used for concerts, touring Broadway shows, high school graduations, and the Washington edition of the Radio City Christmas Spectacular. Prior to the 1971 opening of the John F. Kennedy Center for the Performing Arts, Constitution Hall was also the home base of the National Symphony Orchestra and the city's principal venue for touring classical musicians. Every U.S. president since Calvin Coolidge has attended at least one event at the theater.

Throughout its existence, the society has aided in the Spanish-American War, certifying more than 1,000 female nurses, World War I, supporting more than 3,000 French war orphans, and World War II, providing more 197,000 soldiers with home care packages. The organization is also responsible for an extensive collection of annual publications.

Many well-known and accomplished women were DAR members.[8] These include:

Retrieved from https://www.newworldencyclopedia.org/p/index.php?title=Daughters_of_the_American_Revolution&oldid=1071317
Categories:
Hidden category:
This page was last edited on 25 June 2022, at 21:47.
Content is available under Creative Commons Attribution/Share-Alike License; additional terms may apply. See Terms of Use for details.