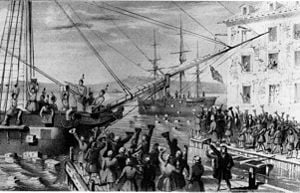 This 1846 lithograph has become a classic image of the Boston Tea Party.

The Boston Tea Party was a protest by the American colonists against against the imposition of a British tax on tea and to the preferential commercial rights granted to the British East India Company, to the detriment of American merchants. In 1773 Britain's East India Company was threatened by bankruptcy, while holding large stocks of tea it was unable to sell in England. To support the company, the Parliament passed the Tea Act, which enabled the company to export the tea directly to the colonies without paying any of the taxes imposed on colonial merchants, thus monopolizing the colonial tea trade.

The tax galvanized growing patriotic sentiment against various restrictive laws imposed by Great Britain on the colonies. In protest of the tax, Sons of Liberty patriots, disguised as Indians and led by Samuel Adams, joined with nearly a thousand other protesters and stormed the cargo ships the HMS Eleanor, Dartmouth and Beaver, broke open all 342 of the tea chests and dumped them into Boston Harbor.

The protest ruined 18,000 pounds of tea and infuriated the British government, which passed the Coercive Acts in April 1774 to punish Boston and the colony of Massachusetts. These acts further antagonized the colonies and led to the first Continental Congress in 1774. At the Congress, representatives of the 13 American colonies excluding Georgia met to counter British encroachments of colonial liberties, seek a formal redress of grievances, and eventually declare full independence as a sovereign United States. The Boston Tea Party, which took place on December 16, 1773, has been seen as an incident leading to a consensus among the British North American colonies that liberty for their people would require a political separation from Great Britain.

The Stamp Act of 1765 and the Townshend Acts of 1767 angered colonists regarding British decisions on taxing the colonies despite a lack of representation in the Westminster Parliament. One of the protesters was the Boston merchant John Hancock. In 1768, Hancock's ship, Liberty, was seized by customs officials, and he was charged with smuggling. He was defended by John Adams, and the charges were eventually dropped. However, Hancock later faced several hundred more indictments.

Hancock organized a boycott of tea from China sold by the British East India Company, whose sales in the colonies then fell from by a factor of nearly 1,000, from 320,000 pounds (145,000 kg) to 520 pounds (240 kg) annually. By 1773, the company had large debts, huge stocks of tea in its warehouses and no prospect of selling it because smugglers were importing tea without paying import taxes. The British government passed the Tea Act, which allowed the East India Company to sell tea to the colonies directly, thereby allowing them to sell for lower prices than those offered by the colonial merchants and smugglers.

There were protests in both Philadelphia and New York, but it was in Boston that this outcry made its mark in history. In March, 1771, Thomas Hutchinson received his commission as Governor of Massachusetts from the British Parliament, and was the last civilian governor of the Massachusetts colony. His administration, controlled completely by the British ministry, increased the friction with the patriots. The publication in 1773 of some letters on Colonial affairs written by Hutchinson, and obtained by Benjamin Franklin in England, still further aroused public indignation. In England, Hutchinson was vindicated in discussions in the Privy Council and Franklin was severely criticized and fired as a colonial postmaster general. The resistance of the colonials led the ministry to see the necessity for stronger measures. A temporary suspension of the civil government followed, and General Thomas Gage was appointed military governor in April 1774. Driven from the country by threats in the following May and broken in health and spirit, Hutchinson spent the rest of his life an exile in England. Still reeling from the Hutchinson letters, Bostonians suspected the new tea tax was simply another attempt by the British Parliament to quash American freedom. The revolutionary patriot Samuel Adams, and others of like mind, called for agents and consignees of the East India Company tea to abandoned their positions; consignees who hesitated had their warehouses, and even their homes, attacked.

The first of many ships carrying the East India Company tea was the HMS Dartmouth arriving in late November 1765. A standoff ensued between the port authorities and the Sons of Liberty. Samuel Adams whipped up the growing crowd by demanding a series of protest meetings. Coming from both the city and outlying areas, thousands attended these meetings—every meeting larger than the one before. The crowds shouted defiance not only at the British Parliament, the East India Company, and the HMS Dartmouth but at Governor Thomas Hutchinson as well. On the night of December 16, 1773 the protest meeting, held at Boston's Old South Church, was the largest yet seen. An estimated 8,000 people were said to have attended. 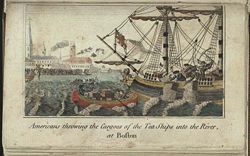 On Thursday, December 16, 1773, the evening before the tea was due to be landed, on a signal given by Samuel Adams, the Sons of Liberty thinly disguised as Mohawk Indians, left the massive protest meeting and headed toward Griffin's Wharf, where lay the HMS Dartmouth and her newly arrived, tea bearing, sister ships the HMS Beaver and the HMS Eleanour. Swiftly and efficiently casks of tea where brought up from the hold to the deck, reasonable proof that some of the "Indians" were, in fact, longshoremen. The casks were opened and the tea dumped overboard; the work, lasting well into the night, was quick, thorough, and efficient. By dawn 90,000 lbs (45 tons) of tea worth an estimated £10,000 had been consigned to the waters of Boston harbor. Nothing else had been damaged or stolen, except a single padlock accidentally broken and anonymously replaced not long thereafter. Unusable Tea washed up on the shores around Boston for weeks.

This act brought criticism from both colonial and British officials. For instance, Benjamin Franklin stated that the destroyed tea must be repaid, and he offered to repay with his own money. The British government responded by closing the port of Boston and put in place other laws that were known as the Intolerable Acts—also called the Coercive Acts, or Punitive Acts. However, a number of colonists were inspired to carry out similar acts, such as the burning of the HMS Peggy Stewart (a British tea ship).

Other colonists, in Boston and elsewhere in the country, pledged to abstain from tea as a protest, turning instead to "Balsamic hyperion" (made from raspberry leaves) and other herbal infusions. This boycott mobilized large segments of the population and helped link the colonies together in a common passive resistance. Colonial women particularly were principal consumers of tea and now became the leaders of the effort to the boycott.[1]

The Boston Tea Party is known around the world and has been inspirational to other rebels. For example, Erik H. Erikson records in his book "Gandhi's Truths" that when Mahatma Gandhi met with the British viceroy in 1930 after the Indian salt protest campaign, Gandhi took some duty-free salt from his shawl and said with a smile that the salt was "to remind us of the famous Boston Tea Party."