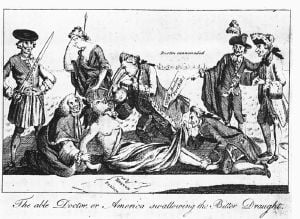 This British cartoon depicting the Intolerable Acts as an assault upon a Native American woman (a symbol of the American colonies) was copied and distributed throughout the Thirteen Colonies.[1]

The Intolerable Acts or the Coercive Acts were names given by colonists in the Thirteen Colonies to a series of laws passed by the British Parliament in 1774. The acts were met with outrage and resistance in the colonies and were important developments in the growth of the American Revolution.

Four of the five acts were issued in direct response to the Boston Tea Party of December 1773. Lord North said "The Americans have tarred and feathered your subjects, plundered your merchants, burnt your ships, denied all obedience to your laws and authority; yet so clement and so long forbearing has our conduct been that it is incumbent on us now to take a different course. Whatever may be the consequences, we must risk something; if we do not, all is over."[2] The British government hoped these punitive measures would, by making an example of Massachusetts, reverse the trend of colonial resistance to parliamentary authority that had begun with the 1765 Stamp Act.

Many colonists viewed the acts as an arbitrary violation of their constitutional rights, and organized the First Continental Congress to coordinate their response.

The Intolerable Acts were largely passed in response to the Boston Tea Party, a protest by the American colonists against Great Britain in which they destroyed many crates of tea bricks on ships in Boston Harbor. The English government was still in debt from the war with France and wanted the colonists to help pay for it. England raised taxes in America to recoup some of there losses. One of the taxes that England raised was on tea imported into the American Colonies.

There were protests in both Philadelphia and New York, but it was in Boston that this outcry made its mark in history. In March, 1771, Thomas Hutchinson received his commission as Governor of Massachusetts from the British Parliament, and was the last civilian governor of the Massachusetts colony. His administration, controlled completely by the British ministry, increased the friction with the patriots. The publication, in 1773, of some letters on Colonial affairs written by Hutchinson, and obtained by Benjamin Franklin in England, still further aroused public indignation. A temporary suspension of the civil government followed, and General Thomas Gage was appointed military governor in April, 1774. Driven from the country by threats in the following May and broken in health and spirit, Hutchinson spent the rest of his life an exile in England. Still reeling from the Hutchinson letters, Bostonians suspected the new Tea Tax was simply another attempt by the British Parliament to quash American freedom. Samuel Adams, and others of like mind, called for agents and consignees of the East India Company tea to abandon their positions; consignees who hesitated had their warehouses, and even their homes, attacked.

This act brought criticism from both colonial and British officials. For instance, Benjamin Franklin stated that the destroyed tea must be repaid, and he offered to repay with his own money. The British government responded by closing the port of Boston and put in place other laws that were known as the Intolerable Acts—also called the Coercive Acts, or Punitive Acts.

The Boston Port Act, the first of the acts passed in response to the Boston Tea Party, closed the port of Boston until the East India Company had been repaid for the destroyed tea and until the king was satisfied that order had been restored. Colonists objected that the Port Act punished all of Boston rather than just the individuals who had destroyed the tea, and that they were being punished without having been given an opportunity to testify in their own defense.

The Administration of Justice Act allowed the governor to move trials of accused royal officials to another colony or even to Great Britain if he believed the official could not get a fair trial in Massachusetts. Although the act stipulated that witnesses would be paid for their travel expenses, in practice few colonists could afford to leave their work and cross the ocean to testify in a trial. George Washington called this the "Murder Act" because he believed that it allowed British officials to harass Americans and then escape justice.[3] Some colonists believed the act was unnecessary because British soldiers had been given a fair trial following the Boston Massacre in 1770.

The Quartering Act applied to all of the colonies, and sought to create a more effective method of housing British troops in America. In the previous act, the colonies had been required to provide housing for soldiers, but colonial legislatures had been uncooperative in doing so. The Quartering Act allowed a governor to house soldiers in other buildings if suitable quarters were not provided. While many sources claim that the Quartering Act allowed troops to be billeted in occupied private homes, this is a myth. The act only permitted troops to be quartered in uninhabited houses, outhouses, barns, or other buildings.[4] Although many colonists found the Quartering Act objectionable, it generated the least protest of the Intolerable Acts.

The Quebec Act was a piece of legislation unrelated to the events in Boston, but the timing of its passage led it to be labeled as one of the Intolerable Acts. The act enlarged the boundaries of the Province of Quebec and instituted reforms generally favorable to the French Catholic inhabitants of the region, although denying them an elected legislative assembly. The Quebec Act offended a variety of interest groups in the British colonies. Land speculators and settlers objected to the transfer of western lands previously claimed by the colonies to a non-representative government. Many feared the establishment of Catholicism in Quebec, and that the French Canadians were being courted to help oppress Americans.[5]

Great Britain hoped that the Intolerable Acts would isolate radicals in Massachusetts and cause American colonists to concede the authority of Parliament over their elected assemblies. It was a calculated risk that backfired, however, because the harshness of some of the acts made it difficult for moderates in the colonies to speak in favor of Parliament. The acts unintentionally promoted sympathy for Massachusetts and encouraged colonists from the otherwise diverse colonies to form the First Continental Congress. The Continental Congress created the Continental Association, an agreement to boycott British goods and, if that did not get the Intolerable Acts reversed after a year, to stop exporting goods to Great Britain as well. The Congress also pledged to support Massachusetts in case of attack, which meant that all of the colonies would become involved when the American Revolutionary War began at Lexington and Concord.

Retrieved from https://www.newworldencyclopedia.org/p/index.php?title=Intolerable_Acts&oldid=1009520
Categories:
Hidden category:
This page was last edited on 4 March 2018, at 22:46.
Content is available under Creative Commons Attribution/Share-Alike License; additional terms may apply. See Terms of Use for details.