The First Continental Congress was a convention of delegates from twelve British North American colonies that met in 1774, early in the American Revolution. Called in response to the passage of the Intolerable Acts by the British Parliament, the Congress was held in Philadelphia, attended by 55 members appointed by the legislatures of the Thirteen Colonies, except for the Province of Georgia, which did not send delegates. The Congress met briefly to consider options, organize an economic boycott of British trade, publish a list of rights and grievances, and petition King George for redress of those grievances.

The Congress also called for another Continental Congress in the event that their petition was unsuccessful in halting enforcement of the Intolerable Acts. Their appeal to the Crown had no effect, and so the Second Continental Congress was convened the following year to organize the defense of the colonies at the outset of the American Revolutionary War.

The Continental Congresses helped to forge the consensus for the American Revolution and create the pattern for American democracy.

Like the Stamp Act Congress, which was formed by American colonists to respond to the infamous Stamp Act, the First Continental Congress was formed largely in response to the Intolerable Acts.

The idea of a continental congress first appeared in a letter written and published by Samuel Adams on September 27, 1773.[4] In May 1774, New York City's Committee of Fifty-One, called for a continental congress when it issued a declaration: "Upon these reasons we conclude that a Congress of Deputies from all the Colonies in general is of the utmost moment; that it ought to be assembled without delay, and some unanimous resolutions formed in this fatal emergency".[5]

The Congress was planned through the permanent committees of correspondence. They chose the meeting place to be Philadelphia, Pennsylvania in Carpenters' Hall, which was both centrally located and one of the leading cities in the colonies. The Congress was held in 1774. 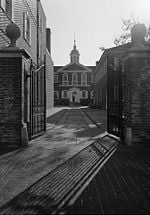 The Congress met from September 5 to October 26, 1774. From September 5, through October 21, Peyton Randolph presided over the proceedings; Henry Middleton took over as President of the Congress for the last few days, from October 22 to October 26. Charles Thomson, leader of Philadelphia Sons of Liberty, was selected to be Secretary of the Continental Congress.[6]

Patrick Henry already considered government dissolved, and was seeking a new system.[7] Pennsylvania delegate Joseph Galloway sought reconciliation with Britain. He put forth a "Plan of Union," which suggested an American legislative body be formed, with some authority, and whose consent would be required for imperial measures.[7] John Jay, Edward Rutledge and other conservatives supported Galloway's plan.[8] (Galloway would later join the Loyalists).

The Congress had two primary accomplishments. First, the Congress created the Continental Association on October 20, 1774. The Association was a compact among the colonies to boycott British goods beginning on December 1, 1774.[9] The West Indies were threatened with a boycott unless the islands agreed to nonimportation of British goods.[10] Imports from Britain dropped by 97 percent in 1775, compared with the previous year.[9] Committees of observation and inspection were to be formed in each colony for enforcement of the Association. All the colony's Houses of Assembly approved the proceedings of the congress with the exception of New York.[11]

If the “Intolerable Acts” were not repealed, the colonies would also cease exports to Britain after September 10, 1775.[9] The boycott was successfully implemented, but its potential for altering British colonial policy was cut off by the outbreak of the American Revolutionary War in 1775.

The second accomplishment of the Congress was to provide for a Second Continental Congress to meet on May 10, 1775. In addition to the colonies which had sent delegates to the First Continental Congress, letters of invitation were sent to Quebec, Saint John's Island, Nova Scotia, Georgia, East Florida, and West Florida. None of these sent delegates to the opening of the second Congress, though a delegation from Georgia arrived the following July.[12]