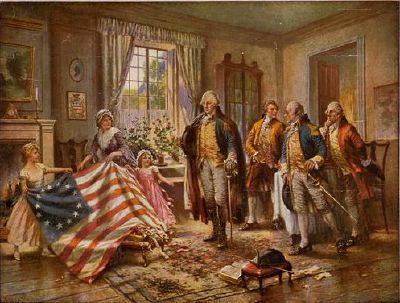 Betsy Ross (January 1, 1752 - January 30, 1836) was an American woman who is said to have sewn the first American flag. Three members of a secret committee from the Continental Congress came to call upon her. Those representatives, George Washington, Robert Morris, and George Ross, asked her to sew the first flag. This meeting occurred in her home some time late in May 1777. George Washington was then commander of the Continental Army. Robert Morris, an owner of vast amounts of land, was perhaps the wealthiest citizen in the Colonies. Colonel George Ross was a respected Philadelphian and also the uncle of her late husband, John Ross.

Elizabeth ("Betsy") Griscom was born on January 1, 1752, to Samuel Griscom (1717–1793) and Rebecca James Griscom (1721–1793) on the Griscom family farm in Gloucester City, New Jersey.[1] The family moved to Philadelphia, Pennsylvania, when she was very young.[2] She was the eighth of 17 children, of whom only nine survived childhood.

Members of Ross' family were devout Quakers. Her father was a master architect. Ross attended Friends schools, where she learned reading, writing, and sewing. Although Ross is often referred to as a seamstress, she was actually a trained upholsterer. After completing her formal education at a school for Quaker children, Ross went on to apprentice to John Webster, a talented and popular Philadelphia upholsterer. She spent several years with Webster and learned to make and repair curtains, bedcovers, tablecloths, rugs, umbrellas, and Venetian blinds, as well as working on other sewing projects.

While she was working as an apprentice upholsterer, she fell in love with another apprentice, John Ross, who was the son of the rector at Christ Church Pennsylvania and a member of the Episcopal clergy. In those times the Quakers disapproved strongly of interdenominational marriages. However, like her mother and father, Betsy eloped with John Ross in 1773 across the Delaware River to New Jersey, where they were married by Benjamin Franklin's son, William Franklin. The couple was subsequently disowned by Ross' Quaker meeting.

The young couple returned to Philadelphia and opened their own upholstery business in 1774. Competition was stiff and business slow. Ross and John attended Christ Church and their pew was next to George Washington's family pew. When the American Revolution began, John joined the militia. He was assigned to guard ammunition stores along the Delaware River. Unfortunately, the gunpowder he was guarding exploded and he eventually died on January 21, 1776. 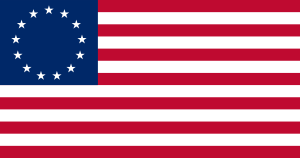 Legend of sewing the first flag

In May of 1777, Ross received a visit from George Washington, George Ross, and Robert Morris of the Second Continental Congress. She was acquainted with Washington through their mutual worship at Christ Church and George Ross was John's uncle. Although there is no record of any such committee, the three men supposedly announced they were a "Committee of Three" and showed her a suggested design that was drawn up by Washington in pencil. The design had six-pointed stars, and Ross, the family story goes, suggested five-pointed stars instead because she could make a five-pointed star in one snip. The flag was sewn by Ross in her parlor. The flag's design was specified in the June 14, 1777 Flag Resolution of the Second Continental Congress, and flew for the first time on September 3, 1777.

No contemporary record of this meeting was made. No "Betsy Ross flag" of thirteen stars in a circle exists from 1776. Historians have found at least 17 other flag makers in Philadelphia at the time. The Betsy Ross story is based solely on oral affidavits from her daughter and other relatives and made public in 1870 by her grandson, William J. Canby. Canby presented these claims in a paper read before the Historical Society of Pennsylvania. No primary sources of the time; letters, journals, diaries, newspaper articles, official records, or business records have surfaced since 1870 confirming or disproving the story. The only further supporting documentation that Betsy Ross was involved in federal flag design is the Pennsylvania State Navy Board commissioning her for work in making "ships colors & c." in May 1777.

Some historians believe it was Francis Hopkinson and not Betsy Ross who designed the official "first flag" of the United States 13 red and white stripes with 13 stars in a circle on a field of blue. Hopkinson was a member of the Continental Congress, a heraldist, a designer of the Great Seal of the State of New Jersey, one of the designer of the Great Seal of the United States, which contains a blue shield with 13 diagonal red and white stripes and 13 five-pointed stars and a signer of the Declaration of Independence.[3]

After her husband John's death, Ross joined the "Fighting Quakers" which, unlike traditional Quakers, supported the war effort. In June 1777, she married sea captain Joseph Ashburn at Old Swedes Church in Philadelphia.

Collateral evidence to the claim that Ross indeed provided significant design input in the flag is provided by reference to Ashburn's family coat of arms. The Ashburn crest provides a stars and bars motif not unlike Old Glory itself.[4]

As was their custom and by royal decree, British soldiers forcibly occupied the Ross's house when they controlled the city in 1777.

The couple had two daughters together. Captain Ashburn was captured by the British while procuring supplies for the Continental Army and was sent to Old Mill Prison, where he died in March 1782, several months after the surrender of the British commander in the field, General Charles Cornwallis at Yorktown.

In May 1783, Ross married John Claypoole, an old friend who had told her of Ashburn's death. The couple had five daughters together.

In 1793 Ross’s mother, father, and sister died within days of each other from the yellow fever, left Ross to raise her young niece. John Claypool suffered a devastating stroke in 1800. He survived the stroke, but was bedridden and required constant nursing care for the next 17 years. In 1812, Ross and John’s young and newly widowed daughter, Clarissa, moved into their home along with her five young children and a sixth on the way.

When John Claypool died in 1817, both he and Ross were 65. Ross, however, lived until 1836 working at the upholstery business until she was 76. She died, then completely blind, at the age of 84.

Married three times, Ross was also buried in three different locations: the Free Quaker burial ground on South Fifth Street near Locust, Mt. Moriah (formerly Mt. Claypool) Cemetery, and now on Arch Street in the courtyard adjacent to the Betsy Ross House. Despite being one of the three most visited tourist sites in Philadelphia, the claim that Ross once lived at her current place of rest is a matter of dispute.[5]

The flag is customarily flown year-round from most public buildings, and it is far from unusual to find private houses flying full-size flags. Some private use is year-round, but becomes widespread on civic holidays like Memorial Day (May 30), Veterans Day (November 11), Presidents' Day (February 22), Flag Day (June 14), and on Independence Day (July 4). On Memorial Day it is common to place small flags by war memorials and next to the graves of U.S. war dead. 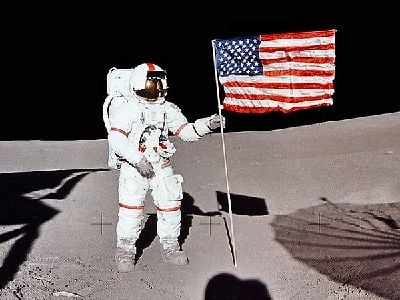 By presidential proclamation, acts of Congress, and custom, the American flag is displayed continuously at the following locations:

Retrieved from https://www.newworldencyclopedia.org/p/index.php?title=Betsy_Ross&oldid=1063329
Categories:
Hidden category:
This page was last edited on 21 January 2022, at 15:50.
Content is available under Creative Commons Attribution/Share-Alike License; additional terms may apply. See Terms of Use for details.