Independence Day (colloquially the Fourth of July or July 4th) is a federal holiday in the United States commemorating the Declaration of Independence on July 4, 1776. The Continental Congress declared that the thirteen American colonies were no longer subject (and subordinate) to the monarch of Britain, King George III, and were now united, free, and independent states. The Congress had voted to declare independence two days earlier, on July 2, but it was not declared until July 4. Thus, Independence Day is celebrated on July 4.

Independence Day is commonly associated with fireworks, parades, barbecues, carnivals, fairs, picnics, concerts, baseball games, family reunions, political speeches, and ceremonies, in addition to various other public and private events celebrating the history, government, and traditions of the United States. As an official holiday, it is a time for family and friends to share the patriotic celebration together.

During the American Revolution, the legal separation of the thirteen colonies from Great Britain in 1776 occurred on July 2, when the Second Continental Congress voted to approve a resolution of independence that had been proposed in June by Richard Henry Lee of Virginia declaring the United States independent from Great Britain's rule.[1]

After voting for independence, Congress turned its attention to the Declaration of Independence, a statement explaining this decision, which had been prepared by a Committee of Five, with Thomas Jefferson as its principal author. Congress debated and revised the wording of the Declaration, finally approving it two days later on July 4. A day earlier, John Adams had written to his wife Abigail:

The second day of July 1776, will be the most memorable epoch in the history of America. I am apt to believe that it will be celebrated by succeeding generations as the great anniversary festival. It ought to be commemorated as the day of deliverance, by solemn acts of devotion to God Almighty. It ought to be solemnized with pomp and parade, with shows, games, sports, guns, bells, bonfires, and illuminations, from one end of this continent to the other, from this time forward forever more.[2]

Adams's prediction was off by two days. From the outset, Americans celebrated independence on July 4, the date shown on the much-publicized Declaration of Independence, rather than on July 2, the date the resolution of independence was approved in the closed session of Congress.[3]

Historians have long disputed whether members of Congress signed the Declaration of Independence on July 4, even though Thomas Jefferson, John Adams, and Benjamin Franklin all later wrote that they had signed it on that day. Most historians have concluded that the Declaration was signed nearly a month after its adoption, on August 2, 1776, and not on July 4 as is commonly believed.[4][1][5]

By a remarkable coincidence, Thomas Jefferson and John Adams, the only two signatories of the Declaration of Independence later to serve as presidents of the United States, both died on the same day: July 4, 1826, which was the 50th anniversary of the Declaration.[6] (Only one other signatory, Charles Carroll of Carrollton, survived them, dying in 1832.[7]) Although not a signatory of the Declaration of Independence, James Monroe, another Founding Father who was elected as president, also died on July 4, in 1831. He was the third President who died on the anniversary of independence. Calvin Coolidge, the 30th president, was born on July 4, 1872. 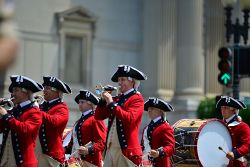 Independence Day is commonly associated with fireworks, parades, barbecues, carnivals, fairs, picnics, concerts, baseball games, family reunions, political speeches, and ceremonies, in addition to various other public and private events celebrating the history, government, and traditions of the United States. A salute of one gun for each state in the United States, called a "salute to the union," is fired on Independence Day at noon by any capable military base.[9]

The night before the Fourth was once the focal point of celebrations, marked by raucous gatherings often incorporating bonfires as their centerpiece. In New England, towns competed to build towering pyramids, assembled from barrels and casks. They were lit at nightfall to usher in the celebration. The highest were in Salem, Massachusetts, with pyramids composed of as many as forty tiers of barrels. These made the tallest bonfires ever recorded. The custom flourished in the nineteenth and twentieth centuries and is still practiced in some New England towns.[10]

The first week of July is typically one of the busiest United States travel periods of the year, as many people use what is often a three-day holiday weekend for extended vacation trips. Families often celebrate Independence Day by hosting or attending a picnic or barbecue; many take advantage of the day off and, in some years, a long weekend to gather with relatives or friends. Decorations (such as streamers, balloons, and clothing) are generally colored red, white, and blue, the colors of the American flag. Parades are often held in the morning, before family get-togethers, while fireworks displays occur in the evening after dark at such places as parks, fairgrounds, and town squares.

Fireworks shows are held in many states. Also, many fireworks are sold for personal use or as an alternative to a public show. Safety concerns have led some states to ban fireworks or limit the sizes and types allowed.

Independence Day fireworks are often accompanied by patriotic songs such as the national anthem, "The Star-Spangled Banner"; "God Bless America"; "America the Beautiful"; "My Country, 'Tis of Thee"; "This Land Is Your Land"; "Stars and Stripes Forever"; and, regionally, "Yankee Doodle" in northeastern states and "Dixie" in southern states. Additionally, Tchaikovsky's 1812 Overture, which celebrates the successful Russian defense against Napoleon's invading army during the War of 1812, is often performed. The overture's brass fanfare finale, complete with ringing chimes and its climactic volley of cannon fire, signals the start of the fireworks display.

New York City has the largest fireworks display in the country sponsored by Macy's, with large quantities of pyrotechnics exploded from barges stationed in either the Hudson River or the East River near the Brooklyn Bridge. The bridge has also served as a launch pad for fireworks on several occasions.[11] Other major displays are in Seattle on Lake Union; in San Diego over Mission Bay; in Boston on the Charles River; in Philadelphia over the Philadelphia Museum of Art; in San Francisco over the San Francisco Bay; and on the National Mall in Washington, D.C.[12] 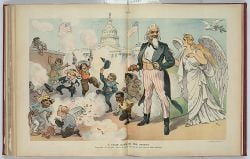 "A False Alarm on the Fourth": 1902 American cartoon about celebrating the Fourth of July. Uncle Sam tells Lady Peace: "It's all right. There's no fighting. The noise you hear is just my family celebrating!" 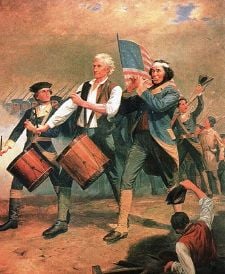 Originally entitled Yankee Doodle, this is one of several versions of a scene painted by A. M. Willard that came to be known as The Spirit of '76. Often imitated or parodied, it is a familiar symbol of American patriotism

In 1852, Frederick Douglass gave a speech now called "What to the Slave Is the Fourth of July?" at a time when slavery was still legal in Southern states, and free African-Americans elsewhere still faced discrimination and brutality. Douglass found the celebration of "justice, liberty, prosperity, and independence" offensive to enslaved people who had none of those things. The Declaration of Independence famously asserts that "all men are created equal, but commentator Arielle Gray recommends that those celebrating the holiday consider how the freedom promised by the phrase "Life, Liberty and the pursuit of Happiness" was not granted to African Americans denied citizenship and equal protection before the passage of the Fourteen Amendment to the United States Constitution.[20]