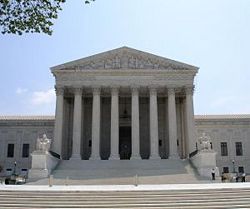 Indemnity is defined as: 1.) protection or insurance against possible loss or damage, 2.) legal exemption from penalties or liabilities, 3.) a compensation paid for loss or damage. [1][2] Similarly, the verb form "indemnify" means to keep free from, secure against (any hurt, harm, or loss); or to compensate for loss suffered, expenses incurred. In all respects it is a positive term denoting protection against risk, exemption from penalties and compensation for loss.

Indemnity is one of many legal and economic terms that find secondary employment in religious usage. The "wages" of sin is death; forgive us our "debts (or trespasses)," Satan as "the accuser," God as a "judge," and "selling" one's soul are everyday examples. Similarly, some meanings of "indemnity" in legal parlance have found their way into in theological usage. Its theological use is of relatively recent vintage—the earliest appearance may have been in William Blackstone's Commentaries on the Laws of England, a work of jurisprudence with a philosophical bent.

All of these legal and financial dynamics—protection from danger by the gods, forgiveness for sin, restitution—have constituted the grist of religion and religious life for millennia. In the last 50 years the term has appeared in theological usage by one new religion, the Unification Church, in a teaching that encapsulates these doctrines.

Corporate Officers, Corporate Executive Board members, and public officials often require an indemnity clause in their contracts before they perform any work.

In addition, indemnification provisions are common in intellectual property licenses in which the licensor does not want to be liable for misdeeds of the licensee. A typical license would protect the licensor against product liability and patent infringement.

Use in reference to the freeing of slaves and servants

In 1807-1808, in Prussia, statesman Baron Heinrich von Stein introduced a series of reforms, the principal of which was the abolition of serfdom with indemnification to territorial lords.

Haiti was required to pay an indemnity of 150,000,000 francs to France in order to atone for the loss suffered by the French slave owners upon its independence.

In the 1860s in the United States, U.S. President Abraham Lincoln had requested many millions of dollars from Congress with which to pay slave owners "for the loss of their property." On July 9, 1868, section 4 of the Fourteenth Constitutional Amendment dismissed all of the claims that slave owners had been injured by the freeing of the slaves.

Use in reference to repaying the costs of war

After wars, the losers have sometimes been required to pay indemnities—the costs of the war incurred on the part of the victor. The nation that wins may insist on being paid compensations for the costs of the war, even after having been the creator of the war.

Use with reference to the Hebrew Bible

In pre-biblical times, most societies allowed for non-equal indemnity; a person who was only injured was often allowed to kill the person responsible in revenge. This was true of many near-eastern and middle-eastern societies. In some cultures, the standard has been like-for-like recompense, as in "an eye for an eye" (See Lex talionis).

An innovation occurred with the development of the Tanakh ("Old Testament"), which put limits on indemnities; in the Biblical view, a maximum limit was applied with the phrase "an eye for an eye, a tooth for a tooth." In later centuries this was anachronistically read by non-Jews as a promotion of equal physical indemnity, while many Jews and Bible scholars hold that in its original context its function was to limit such actions.

English philosopher of law William Blackstone's use of the term indemnity moved it in a theological direction. In his Commentaries on the Laws of England, Blackstone used the term in two significant ways.

Here, indemnity appears as a form of grace, because over and above his resolving his debts at pennies on the dollar, the debtor is free of any liens against future earnings.

In the Unification Church, indemnity is a theological term involved in what is traditionally called the absolution of sin or reconciliation of God with human beings. It is the English rendering of the Korean word tanggam, a word used as infrequently as indemnity is used in English. Unificationist authorities, such as Reverend Chung Hwan Kwak, are explicit that the term, although the closest English word available, is not a very accurate rendition of the meaning of the term in the Korean language. The dictionary translation of tanggam is "a writing off of debts, remission, cancellation, forgiveness." It is composed of two Chinese characters, the first for "libertine" and the second for "reduce." The meaning in Chinese is something like a reduction of penalties accorded to a libertine.

The Unification theological meaning of indemnity begins with the understanding that human beings, individually and collectively, reside in a "midway position" between God and Satan. Their ultimate fate, whether they associate with God or Satan, or remain midway between them, is determined by the acts ("conditions") they make (or fail to make). God and Satan negotiate their claim over the conditions human beings make through an intricate set of determinants and, based on that claim, one or the other will take the person or collective to their side. "… until people make a condition through which God can claim them as His own, there is no way God can restore them to the heavenly side. … Unless Satan finds some condition through which he can attack a fallen person, he also cannot arbitrarily claim him for his side."[3] The making of conditions "of restitution" that take us to God's side is called "indemnity." The making of conditions that take us to Satan's side is called "sin."

The significance of the term in Unificationism can be seen in this passage from the Exposition of the Divine Principle, in which indemnity emerges as the paradigm underlying the entire story of God's history in relation to the human race. The context of this passage is a discussion of cases of returning something to its original position, or recovery of something that was lost:

Secondly, it may have value less than what was lost. Recalling Blackstone, this would be as in a case of the bankruptcy of a trustworthy person, in which, as the Divine Principle text states, "the debtor can pay back less than the total amount and still satisfy the entire debt. The outstanding theological example of this is redemption through the cross, by which great forgiveness is accorded on the basis of a small condition of faith and participation in the sacraments.

The third case is a special case, when "what was lost" is specifically a previous indemnity condition. It refers to a situation in which a person or group has the opportunity to "meet a condition of lesser indemnity" but fails. At that point the person or group "must make another indemnity condition …, this time at a price greater than the first" because they need to recover what was originally lost plus the additional failed attempt. This is because failure is not a neutral thing; if a condition of indemnity meant for God fails, it is taken by Satan.

As human beings typically fail or only partially fulfill the opportunities to make, or "set," conditions of indemnity, the magnitude of the indemnity conditions necessary multiplies as sin echoes through history. The primal sins, including the Human Fall, the first murder, Ham's covering of Noah, and Abraham's falling asleep (after cutting the heifer and sheep in half but without cutting the doves in half), are subject to repeated failures or partially successful attempts at "indemnification." Human beings therefore need to set conditions of indemnity, not only for the first sin, but for each and every related failure.

Because it, like indemnity, brings to light the resonance of human actions through the passage of time, the Hindu-Buddhist teaching of karma deserves some attention. It means, simply put, "deed" or "act" and more broadly the universal principle of cause and effect, the action and reaction which governs all life. Karma is not fate, for human beings act with free will creating their own destiny. According to the Vedas, if we sow goodness, we will reap goodness; if we sow evil, we will reap evil. Karma refers to the totality of our actions and their concomitant reactions in this and previous lives, all of which determines our future. Not all karma rebounds immediately. Some accumulate and return unexpectedly in this or other births.

That the phenomenon transcends time is common to Unificationist indemnity and eastern belief. Unificationism rejects the claim that persons are reborn on earth, but affirms that missions that are associated with persons reappear. For example, Unification theology holds that the mission to set indemnity conditions necessary to prepare Israel for the messianic coming failed in Elijah, so John the Baptist inherited this mission and was even called Elijah by Jesus and the Sadducee's. So too, the mission to father the God-centered world failed in Adam, so Jesus inherited this mission and was even called Adam by Paul (1 Cor 15:45). The mission passes to another individual at the Second Coming, one who is even called Jesus by the New Testament writers.

The term karma provides a useful context for the understanding of indemnity, but it does not have the same meaning, in particular because karma treats the universe as a realm of law in which imbalance will be redressed sooner or later, whereas indemnity operates in a universe in which God and Satan, along with human beings, argue and interpret the law. The weight of their love and hate, their claims and counter-claims, are placed on the scales. Law may require repayment, but love-per Blackstone—introduces the possibility of grace (indemnity) being granted by the party to whom the debt is owed. On the other hand, the same cosmology features the possibility that an evil master gains control of the environment and extracts endless payment for a single mistake.

The presuppositions of the Buddhist theory surrounding karma are consistent with the Unification theory surrounding indemnity. First, action really is happening; it's not an illusion. Second, one really is responsible for one's actions. Third, actions have results and those results can be good or bad depending on the quality of the intention behind the act. But the doctrine of indemnity adds supernatural, or spiritual, agents, God and Satan, who compete for the devotion of human beings and the right to claim individuals and collectives such as lineages, nations, religions and, ultimately, the entire human race. Thus, the Judeo-Christian personalistic universe provides a context more apt that Hinduism and Buddhism to understand indemnity. In the story of Job is presented the contest of God and Satan over the human soul. In the story of Adam and Eve, we witness the same; again, God and Satan, the serpent, compete for human allegiance. Christian theology presents Jesus as both God and man repudiating Satan's claim on humankind. Indemnity, true to its varied set of complex legal meanings, plays in Unification theology an integral and equally complex role in the context of a protected or compensated party (human beings) dealing with competing entities each claiming ownership, offering rewards and requiring offerings.

Retrieved from https://www.newworldencyclopedia.org/p/index.php?title=Indemnity&oldid=741564
Categories:
Hidden category:
This page was last edited on 23 June 2008, at 23:45.
Content is available under Creative Commons Attribution/Share-Alike License; additional terms may apply. See Terms of Use for details.