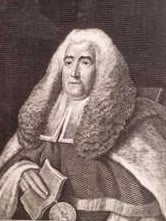 William Blackstone as illustrated in his Commentaries on the Laws of England.

Sir William Blackstone (July 10, 1723 – February 14, 1780) was an English jurist and professor who produced the historical and analytic treatise on the Common law called Commentaries on the Laws of England, first published in four volumes during the years 1765–1769. This first attempt to reduce the English Common law to a single unified system was an extraordinary success, and Blackstone received a knighthood in honor of his great work. The concepts and theories in the Commentaries went on to play a major role in the foundation of the Declaration of Independence, and the United States Constitution. The Commentaries still remain an important source of classical views of the Common law and its principles, and have served as the basis of university legal education in both England and the United States since their publication. Blackstone did not analyze the law, or promote reform; he saw the law as designed to impose rules of conduct by the ruler, representing the ultimate authority of nature, or God. Thus, his purpose was to accurately describe the laws as they existed, and in this he succeeded, allowing others who had a need to reform the law to build on his work. Indeed, though, if the law were cosmic principles given to humankind by God, we would need no reform, only understanding, as Blackstone envisioned.

William Blackstone was born in Cheapside, London in July 1723, the son of a prosperous silk merchant. He became orphaned at an early age and was placed in the care of his uncle. He began his education at Charterhouse School, and at the age of fifteen was sent to continue his studies at Pembroke College, Oxford. In 1744 he was elected a fellow of All Souls' College, Oxford.

Upon completing his studies in 1746, Blackstone was called to the Bar at the Middle Temple. As a reward for his services he was appointed steward of its manors in May 1749. In addition, this opportunity was an effort to advance the interests of the college. Unsuccessful in law, he returned to Oxford in 1753 to deliver a course of lectures on English law. He became the first occupant of the newly founded Vinerian professorship of law in 1758.

Blackstone married Sarah Clitherow in 1761, and together they had nine children. Later that year he was elected a Member of Parliament and was appointed king's counsel. Blackstone retired from his professorship and headship in 1766. In 1770, Blackstone was knighted. He was made a judge of the Court of Common Pleas in 1770, where he administered the law efficiently, but his record was no more distinguished than his time spent at the Bar.

William Blackstone spent the last twenty years of his life with his family in Castle Priory House, which he built at Wallingford. On February 14, 1780, Blackstone died at the age of 57 and was buried at St. Peter's Church in the town. The Castle Priory House still stands, now as a hotel. His fine statue by Bacon in the Library of All Souls seems to dominate that magnificent room, to the enrichment of whose shelves he largely contributed. If it is true that in his later life he became both irritable and heavy, it is certain that, during the eighteen years spent in his beloved college, he was the most genial and delightful of companions.[1]

Blackstone lived and worked in the eighteenth century, contemporary with such as Adam Smith, David Hume, and Benjamin Franklin. The law was rooted in everyday life but removed by lawyers and courts from most people's lives. Blackstone's task, and in this he was successful, was to open the law to many for whom it had been closed.[2]

Commentaries on the Laws of England

Blackstone's lectures were designed as an introduction to the whole of the Common law, and they proved an immediate success with his students. It was the first time that English law had been made easily readable and comprehensible to the lay mind. Shortly thereafter, the lectures were published as Commentaries on the Laws of England. The series was comprised of four volumes, each representing a different theme, in order to present the whole of British law in a logical and comprehensive way. The publication was a great success, and said to have brought Blackstone £14,000, which was a very considerable sum of money at the time.

The first volume, published in 1765, was entitled "Rights of Persons"; the majority of the book based on the "Absolute Rights of Individuals." It also covered topics such as inheritance of the throne, duties of magistrates, allegiance to one's nation, marriage, and guardianship. The second volume entitled "Rights of Things" encompassed the rights that people have over property. "Private Wrongs" (known today as "torts") was the discussion basis for the third book. The fourth and final volume was published in 1769 and covered "Public Wrongs," meaning crimes and punishments, including offenses against God and religion.

The Commentaries on the Laws of England were treated like an authority and dominated the legal system for more than a century. In addition, the Commentaries had extreme influential power over legal education in both England and America. The Commentaries were published all around the world, beginning in the U.S. in 1771. This first printing of 1,400 books sold out and soon after a second edition followed. They were translated into French, German, and Russian. Blackstone also published treatises on the Magna Carta and the Charter of the Forests.

Blackstone's characterization of property rights as "sole and despotic dominion which one man claims and exercises over the external things of the world, in total exclusion of the right of any other individual in the universe," has often been quoted in judicial opinions and secondary legal literature as the dominant Western concept of property. In spite of the frequency with which this conception is quoted, however, it is now discredited or understood as a mere formalism, since in reality property rights are encumbered by numerous factors, including the will of the state.

His work earned him belated success as a lawyer, politician, judge, and scholar. Blackstone, however, more than paid for his success; he and his book were the targets of some of the "most vitriolic attacks ever mounted upon a man or his ideas."[2]

The Commentaries on the Laws of England were written shortly before the United States Constitution. The terms and phrases used by the framers often derived from Blackstone's works. The book is regarded not only as a legal classic, but also as a literary masterpiece.

Blackstone's work was more often synthetic than original, but his writing was organized, clear, and dignified, which brings his great work within the category of general literature. He also had a turn for neat and polished verse, of which he gave proof in The Lawyer's Farewell to his Muse.[2]

United States courts frequently quote Blackstone's Commentaries on the Laws of England as the definitive pre-Revolutionary War source of Common law; in particular, the United States Supreme Court has often quoted from Blackstone's work whenever they engaged in historical discussion, for example, when discussing the intent of the framers of the Constitution.

United States and other Common law courts mention with strong approval "Blackstone's Formulation" (also known as Blackstone's ratio or the Blackstone ratio), popularly stated as "Better that ten guilty persons escape than that one innocent suffer." Named after Blackstone, the principle expressed in the formulation is much older, being closely tied to the presumption of innocence in criminal trials.[3]

Blackstone and his work have appeared in literature and popular culture. Blackstone received mention in Herman Melville's Moby-Dick. A bust of Blackstone is a typical ornament of a lawyer's office in popular fiction.