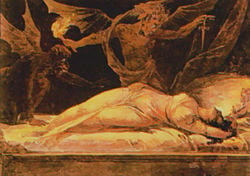 In Western medieval legend, an incubus (plural incubi) is a demon in male form supposed to lie upon sleepers, especially women, in order to have sexual intercourse with them. They are also believed to do this in order to spawn other incubi. The incubus drains energy from the woman on whom it lies in order to sustain itself, and some sources indicate that it may be identified by its unnaturally cold penis.[1] Religious tradition holds that repeated intercourse with such a spirit by either males or females (the female version of the incubus is called a succubus) may result in the deterioration of health, or even death.[2]

The word "Incubus" is derived from the Latin preposition in, which in this case means "on top of," and cubo, which is Latin for, "I lie." The word incubo translates into "I lie on top".[3]

A number of mundane explanations have been offered for the origin of the incubus legends. They involve the Medieval preoccupation with sin, especially the sexual sins of women. Victims may have been experiencing waking dreams or sleep paralysis. Also, nocturnal arousal, orgasm, or nocturnal emission could be explained by the idea of creatures causing an otherwise guilt-producing and self-conscious behavior.[4]

Purported victims of incubi could have been the victims of sexual assault by a real person. Rapists may have attributed the rapes of sleeping women to demons in order to escape punishment. A friend or relative may have assaulted the victim in her sleep. The victims and, in some cases the local clergy,[5] may have found it easier to explain the attack as supernatural rather than confront the idea that the attack came from someone in a position of trust.

One of the earliest mentions of an incubus comes from Mesopotamia on the Sumerians king's list, c. 2400, where the hero, Gilgamesh's father, is listed as Lilu (Lila).[6] It is said that Lilu disturbs and seduces women in their sleep, while a similar demon, Lilitu, appears to men in their erotic dreams.[7] Two other corresponding demons appear as well, Ardat lili, who visits men by night and begets ghostly children from them, and Irdu lili, who is known as a male counterpart to Ardat lili and visits women by night and begets from them. These demons were originally storm demons, but they eventually became regarded as night demons due to mistaken etymology.[8]

According to some sources, incubi and succubi were said not to be different genders but the same demons able to change their sex.[9] A succubus would be able to sleep with a man and collect his sperm, and then transform into an incubus and use that seed on women. Their offspring were thought to be supernatural in many cases, even if the actual genetic material originally came from humans.[10]

Though many tales claim that the incubus is bisexual,[11] others indicate that it is strictly heterosexual and finds attacking a male victim either unpleasant or detrimental.[12] There are also numerous stories involving the attempted exorcism of incubi or succubi who have taken refuge in, respectively, the bodies of men or women.

Incubi were sometimes said to be able to conceive children. The half-human offspring of such a union is a Cambion.

According to the Malleus Maleficarum, exorcism is one of the five ways to overcome the attacks of incubi, the others being Sacramental Confession, the Sign of the Cross (or recital of the Angelic Salutation), moving the afflicted to another location, and by excommunication of the attacking entity, "which is perhaps the same as exorcism."[13] On the other hand, the Franciscan friar Ludovico Sinistari stated that incubi "do not obey exorcists, have no dread of exorcisms, show no reverence for holy things, at the approach of which they are not in the least overawed."[14]

There are a number of variations on the incubus theme around the world. In Zanzibar, Popo Bawa primarily attacks men and generally behind closed doors.[15] El Trauco, according to the traditional mythology of the Chiloé Province of Chile, is a hideous deformed dwarf who lulls nubile young women and seduces them. El Trauco is said to be responsible for unwanted pregnancies, especially in unmarried women.[16] In Hungary, a Liderc can be a Satanic lover that flies at night.[17]

In Brazil, and the rain forests of the Amazon Basin, the Boto is a combination of siren and incubus, a very charming and beautiful man who seduces young women and takes them into the river.[18] It is said to be responsible for disappearances and unwanted pregnancies, and it can never be seen by daylight, because it metamorphoses into a kind of river dolphin during those hours. According to legend, the boto always wears a hat to disguise the breathing hole at the top of its head.[19]

Incubi in popular culture and media

Incubi have been part of modern popular culture in other ways. They were among creatures of the White Witch present at the killing of Aslan in The Lion, the Witch, and the Wardrobe. In Incubus, a film starring William Shatner, the main character is tempted by a lusting succubus in order to corrupt his pure soul. An incubus is later summoned to destroy him.

In the Anne Bishop novel, Sebastian, the hero is an incubus.

The Darkangel Trilogy by Meredith Ann Pierce (1982, 1984, 1990) referred to the fully transformed "sons" of the White Witch as Incubi among many other names.

In the 2006 book, Trail of an Incubus, by Iliya Englin, the incubus is portrayed as a different humanoid species, outwardly human but with far greater longevity and physical strength. Their intelligence is about the same or greater than human, albeit with certain blind spots. They hate humanity for displacing them from the top of the food chain, and their character traits give rise to traditional demonic myths—an enemy moving amongst us, intelligent, resourceful and hostile—and in constant search for human virgins.

The Alice Merridew novel, Aka Shinema, also chronicles a tale of an incubus king.

Incubi also appear in a number of popular video games and is the name of several rock bands.