Patrick Henry (May 29, 1736 – June 6, 1799) was a ary statesman and patriot, leader in colonial Virginia's House of Burgesses, delegate to the 1774 Continental Congress, and first governor of the state of Virginia.

Henry is remembered in history for his ringing "Give me liberty, or give me death!" speech advocating independence from Great Britain. Along with Samuel Adams and Thomas Paine, he was one of the most radical advocates of the American Revolution and republicanism, especially in his denunciations of corruption in government officials and his defense of historic rights. His Resolutions in opposition to the Stamp Act in 1765 were, arguably, the first shot fired in the Revolutionary War.

A staunch defender of state rights, Henry opposed ratification of the federal Constitution, which he believed ceded too much power to the federal government. Henry's passionate demands for a constitutional bill of rights led to assurances that the Constitution would be amended after ratification, which in turn won the necessary support among the states to secure ratification. Following the formal adoption of the Bill of Rights in 1791, and with growing concerns over the radical direction of the French Revolution, Henry would come to support the Federalist party and was elected to the Virginia legislature as a Federalist just prior to his death in 1799.

Henry was also among the more traditionally religious of the Founding Fathers. Despite differences with Deists like Thomas Jefferson and Benjamin Franklin, Henry saw the hand of Providence in the creation of the new nation. In stark contrast to the magisterial dignity of George Washington, the refined rationalism of Jefferson, or studiousness of James Madison, Henry was a fiery orator and radical revolutionary whose passion for freedom helped spark the historic events leading to American independence.

Born in Hanover, Virginia, to an immigrant father from Aberdeenshire, Scotland, and a mother of English descent, Henry trained as an attorney. Noted for his fiery oratorical skills, the Virginian first made a name for himself in a case dubbed the, "Parson's Cause" (1763), which was an argument on whether the price of tobacco paid to clergy for their services should be set by the colonial government or by the Crown. Henry passionately proclaimed that a king who would veto a good and necessary law made by a locally elected representative body was not a father to his people but "a tyrant who forfeits the allegiance of his subjects." Henry technically lost the case, but damages were set at such a nominally low level that the result was widely perceived to be a victory for the independence movement.[1]

Perhaps in part because of his success in this venture, Henry was elected to the House of Burgesses (the legislative body of the Virginia colony) in 1765. That same year, he proposed the Virginia Stamp Act Resolutions, possibly the most anti-British (many called it "treasonous") American political action to that point, and some credit the Resolutions as one of the main catalysts of the Revolution.[2] The freshman representative waited for an opportunity when the mostly conservative members of the House were away (only 24 percent was considered sufficient for a quorum).

Under these circumstances he succeeded, through much debate and persuasion, in getting his proposal passed. The proposals were based on principles that were well established British rights, such as the right to be taxed by one's own representatives. They went further, however, to assert that the colonial assemblies had the exclusive right to impose taxes on the colonies and could not assign that right. The imputation of treason is due to his inflammatory words, "Caesar had his Brutus; Charles the First his Cromwell; and George the Third— (at this point his speech was interrupted with cries of "Treason" "Treason" and he stopped, then calmly proceeded to complete his sentence) "George the Third may profit by their example. If this be treason, make the most of it." 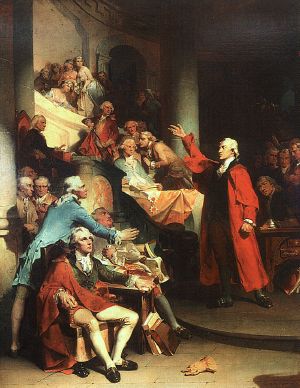 Patrick Henry's "Treason" speech before the House of Burgesses in an 1851 painting by Peter F. Rothermel

Five of Henry's resolutions were approved, and henceforth Henry would stand as a leader in Virginia in protests against British tyranny and defense of colonial rights. According to biographer Richard Beeman, the legend of Henry's speech grew more dramatic over the years. Henry probably did not say the famous last line of the above quote, "If this be treason, make the most of it." The only account of the speech written down at the time by an eyewitness (which came to light many years later) records that Henry actually apologized after being accused of uttering treasonable words, assuring the House that he was still loyal to the king.

'Give me liberty, or give me death'

Did you know?
Patrick Henry is best known for his speech "Give me liberty, or give me death!" advocating American independence

Patrick Henry is perhaps best known to history for the speech he made in the House of Burgesses on March 23, 1775, urging legislature to take military action against the encroaching British military force. The House was undecided as to whether to send troops or not, but was leaning toward not committing troops. As Henry stood in Saint John's Church in Richmond, Virginia where the legislature was meeting, he ended his speech with his most famous words:

Is life so dear, or peace so sweet, as to be purchased at the price of chains and slavery? Forbid it, Almighty God! I know not what course others may take; but as for me, give me liberty or give me death!

The crowd jumped up and shouted, "To Arms! To Arms!"

Henry's sensational speech led to the order for Virginia's royal governor, Lord Dunmore, to remove gunpowder from the crown's armory. Henry then mobilized the militia to reclaim the powder, an action almost simultaneous with the British march on Concord, Massachusetts, and often cited as the beginning of the American Revolution in Virginia.

Problematically, the text of Henry's famed speech did not appear in print until 1817, in the biography, Life and Character of Patrick Henry by William Wirt. Although Wirt assembled his book from recollections by persons close to the events, some historians have since speculated that the speech, or at least the form with which is familiar today, was essentially written by Wirt decades after the fact.[3]

From the testimony of witnesses, Henry's hypnotic orations always seemed to be moving and convincing at the time, but the substance difficult to remember immediately afterwards. According to Thomas Jefferson, "Although it was difficult, when [Henry] had spoken, to tell what he had said, yet, while speaking, it always seemed directly to the point. When he had spoken in opposition to my opinion, had produced a great effect, and I myself had been highly delighted and moved, I have asked myself, when he ceased, 'What the devil has he said?' and could never answer the inquiry."[4]

Like Jefferson and indeed most of Virginia's revolutionary leaders, Henry recognized a glaring contradiction between his ideals of liberty and his role as a slave owner. In a 1773 letter to Robert Pleasants, Henry frankly acknowledged his, and his Virginia compatriot's culpability:

Would anyone believe I am the master of slaves of my own purchase! I am drawn along by the general inconvenience of living here without them. I will not, I cannot justify it. However culpable my conduct, I will so far pay my devoir to virtue as to own the excellence and rectitude of her precepts, and lament my want of conformity to them.[5]

Henry was an outspoken critic of the United States Constitution and urged against its adoption. At the Virginia Convention of 1788, Henry engaged fellow Virginia patriot and chief architect and advocate of the Constitution James Madison in a dramatic debate. He enumerated the tyrannies that would follow from adoption of the new Constitution, from harassing federal tax gatherers to citizens hauled off to distant courts before unknown judges. He predicted the president would prove to be a worse tyrant than the British monarch and that the new government would favor British and Tory interests and negotiate away American rights to use the Mississippi River.[6]

Despite Henry's impassioned arguments, the Constitution was ratified by the states and Henry accepted the vote by announcing that he would be "a peaceable citizen." Yet as a leading Antifederalist, he was instrumental in urging the adoption of a Bill of Rights to amend the new Constitution. Largely through Henry's influence, James Madison introduced the Bill of Rights in the form of amendments to the Constitution in the First Congress of 1789. Ten of 12 amendments passed in Congress and were then ratified by the states in 1791.

By the 1790s, the political landscape began to change following the incendiary 1789 French Revolution. The passage of the Bill of Rights also greatly pacified Henry's vehement opposition to the new constitution and he returned to private life. Like many of the leading patriots of his day, Patrick Henry was deeply in debt, and so resigned from public life, and resumed his law practice and amassed considerable wealth both as a successful lawyer and a real estate speculator. His national reputation and support of President Washington and the Federalists in 1793 to led to a series of proffered appointments as senator, minister to Spain and to France, chief justice of the Supreme Court, and as secretary of state, which he declined. In 1798, Washington's successor, Pres. John Adams, nominated him as special emissary to France, which he also had to decline because of failing health. Nevertheless, Henry strongly supported Virginian and later U.S. Supreme Court Chief Justice John Marshall in his candidacy for the U.S. House of Representatives.

During Adams' term, Henry heatedly denounced the Virginia and Kentucky Resolutions, which had been secretly written by Thomas Jefferson and James Madison and approved by the legislatures of those two states. The resolutions upheld states rights in opposition to the controversial Alien and Sedition Acts passed during the Adams administration that criminalized certain political speech. Henry warned that civil war was threatened because Virginia,

had quitted the sphere in which she had been placed by the Constitution, and, in daring to pronounce upon the validity of federal laws, had gone out of her jurisdiction in a manner not warranted by any authority, and in the highest degree alarming to every considerate man; that such opposition, on the part of Virginia, to the acts of the general government, must beget their enforcement by military power; that this would probably produce civil war, civil war foreign alliances, and that foreign alliances must necessarily end in subjugation to the powers called in.[7]

At the urging of Washington, he stood for election to Virginia's House of Delegates in 1799, as a Federalist. Henry was elected, but died three months prior to taking his seat. He died at Red Hill Plantation, Virginia, in 1799, at the age of 63.

Retrieved from https://www.newworldencyclopedia.org/p/index.php?title=Patrick_Henry&oldid=1088349
Categories:
Hidden category:
This page was last edited on 21 November 2022, at 16:44.
Content is available under Creative Commons Attribution/Share-Alike License; additional terms may apply. See Terms of Use for details.