Benjamin Harrison (August 20, 1833 – March 13, 1901) was the twenty-third president of the United States. Serving one term from 1889 to 1893, he was from the state of Indiana and had previously served as a senator from that state. Like his grandfather William Henry Harrison, the ninth president of the United States, Harrison was a distinguished war veteran, serving as a colonel and brigadier general in the Union Army during the Civil War. A respected attorney in his state, veteran, and presidential descendant, he earned the Republican Party's endorsement.

Harrison presidency was notable for the dramatic geographical expansion of the United States. The large western states of North Dakota, South Dakota, Montana, Washington, Idaho, and Wyoming were admitted to the union during Harrison's term in office. President Harrison also signed the Sherman Anti-Trust Act, the first Federal legislation to protect trade and commerce from monopolies that threatened free-market competition.

A grandson of President William Henry Harrison and great-grandson of Benjamin Harrison V, Benjamin was born on August 20, 1833, in North Bend, Ohio as the second of eight children of John Scott Harrison and Elizabeth Ramsey Irwin. He attended Miami University, Oxford, Ohio, where he was a member of the fraternity Phi Delta Theta, and graduated in 1852. He studied law in Cincinnati, Ohio, then moved to Indianapolis, Indiana in 1854. He was admitted to the bar and became reporter of the decisions of the Indiana Supreme Court.

Harrison was married twice. On October 20, 1853, he married Caroline Lavinia Scott. They had two children who lived to adulthood, Russell Benjamin Harrison and Mary Harrison McKee, as well as a daughter who died very shortly after birth in 1861. After Caroline Harrison's death of tuberculosis in 1892 while Harrison was in office, he married his wife's widowed niece and former secretary Mary Scott Lord Dimmick on April 6, 1896. They had one daughter, Elizabeth Harrison.

Harrison served in the Union Army during the Civil War. In July 1862, at the request of Gov. Oliver P. Morton, Harrison raised the 70th Indiana Regiment, drilled the recruits in tactics, and emerged as a strict disciplinarian. His men called him "Little Ben" because he was only 5 feet 6 inches (1.7 meters) tall. Under his colonelcy, the 70th achieved fame on the eve of the Atlanta campaign. At Resaca, Golgotha, and New Hope Church, Harrison served gallantly. For heroism at Peach Tree Creek, duly noted by Gen. Joseph Hooker, President Lincoln made Harrison a brigadier general. Later he fought at Nashville before rejoining his command for the march through the Carolinas and Virginia.

While in the field in October 1864, he was re-elected reporter of the State supreme court and served four years. He was an unsuccessful Republican candidate for governor of Indiana in 1876. He was appointed a member of the Mississippi River Commission in 1879 and elected as a Republican to the United States Senate, where he served from March 4, 1881, to March 3, 1887. He was chairman of the United States Senate Committee on Transportation Routes to the Seaboard (Forty-seventh Congress) and U.S. Senate Committee on Territories (Forty-eighth United States Congress and Forty-ninth United States Congresses).

In 1888, James G. Blaine, the Republican party's most prominent figure, declined to seek the presidential nomination. The national convention proceeded to nominate Harrison as the soldier-citizen who combined fitness with availability. The call came on the 8th ballot. Levi P. Morton, a New York City banker, received the vice presidential nomination. Cleveland was renominated by the Democrats.

Harrison conducted a unique and unexpected front-porch campaign, delivering more than 80 extemporaneous speeches to nearly 300,000 people who visited him at Indianapolis. He made high tariffs the chief issue, while Cleveland called for lower tariffs and even free trade. On election day Harrison trailed Cleveland by more than 90,000 popular votes, but he carried Indiana, New York, and several "doubtful states" and won the presidency by an electoral vote of 233 to 168.

Harrison was inaugurated President of the United States on March 4, 1889, and served through March 3, 1893. Harrison was sometimes known as the "centennial president" because his inauguration was the 100th anniversary of the inauguration of George Washington.

"What can I do when both parties insist on kicking?"

Civil service reform was a no-win proposition; pleasing one side of the issue ensured that the other would be offended. President Harrison made a number of excellent merit-based appointments to federal positions, but in so doing he offended the political bosses. On the other hand, his few efforts to do the right thing were regarded by the good-government forces as being too little. Congress was split so far apart on the issue that agreeing to any measure for one side would alienate the other. The issue became a popular political football of the time and was immortalized in a cartoon captioned, "What can I do when both parties insist on kicking?"

Harrison was proud of the vigorous foreign policy which he helped shape. The first Pan-American Congress met in Washington, D.C. in 1889, establishing an information center which later became the Pan American Union. At the end of his administration, Harrison submitted to the Senate a treaty to annex Hawaii; to his disappointment, President Cleveland later withdrew it.

The most perplexing domestic problem Harrison faced was the tariff issue. The high tariff rates in effect had created a surplus of money in the Treasury. Low-tariff advocates argued that the surplus was hurting business. Republican leaders in Congress successfully met the challenge. Representative William McKinley and Senator Nelson W. Aldrich framed a still higher tariff bill; some rates were intentionally prohibitive. 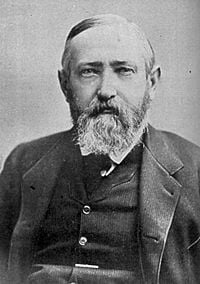 Harrison tried to make the tariff more acceptable by writing in reciprocity provisions. To cope with the Treasury surplus, the tariff was removed from imported raw sugar; sugar growers within the United States were given two cents per pound bounty on their production.

Long before the end of the Harrison Administration, the Treasury surplus had evaporated and prosperity seemed about to disappear. Congressional elections in 1890 went against the Republicans, and party leaders decided to abandon President Harrison, although he had cooperated with Congress on party legislation. Nevertheless, his party renominated him in 1892, but he was defeated by Cleveland. This loss occurred just two weeks after, Harrison's wife, Caroline died after a long battle with tuberculosis.

Harrison appointed the following Justices to the Supreme Court of the United States:

When North and South Dakota were admitted to the Union, Harrison covered the tops of the bills and shuffled them so that he could only see the bottom. Thus, it is impossible to tell which was signed first, and which was the 39th and the 40th.

A loyal Republican, Harrison continued to serve as his party’s spokesman after his defeat by Grover Cleveland in 1892. He resumed his law practice, taking on the international border dispute between Venezuela and British Guiana (now Guyana) and earning respect for his legal expertise. He also wrote several addresses and articles on governmental affairs that were well received and widely read.

Harrison developed the flu and a bad cold in February 1901. Despite treatment by steam vapor inhalation, Harrison's condition only worsened. Benjamin Harrison VI eventually died from influenza and pneumonia. He died a respected elder statesman, on March 13, 1901, and is interred in Crown Hill Cemetery.

In 1942, a United States Liberty ship named the SS Benjamin Harrison was launched. She was torpedoed and scuttled in 1943.

A U.S. Army base, Fort Benjamin Harrison, was established after Harrison's death in Indianapolis, but it was closed in the 1990s.

Retrieved from https://www.newworldencyclopedia.org/p/index.php?title=Benjamin_Harrison&oldid=1063230
Categories:
Hidden category:
This page was last edited on 20 January 2022, at 20:59.
Content is available under Creative Commons Attribution/Share-Alike License; additional terms may apply. See Terms of Use for details.