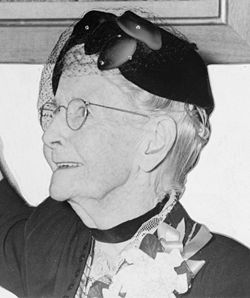 Grandma Moses (September 7, 1860 – December 13, 1961) was a renowned American folk artist. Moses was one of the most successful and famous artists in America, and possibly the best known American artist in Europe. She became well known for her bright and lively paintings of farm life, which reflected her memories of childhood—mostly scenes of rural celebrations and daily life in upstate New York. Her professional art career started in her seventies and lasted almost until her death at the age of one hundred one years with sixteen hundred paintings to her credit. Grandma Moses was an inspiration to many, not only because of her paintings but also because of her positive, giving, grateful, and accepting view of life.

She was born Anna Mary Robertson in Greenwich, New York and was one of ten children born to Russell and Margaret Robertson. Grandma Moses had little formal education—she attended a small one-room schoolhouse with her siblings. She enjoyed painting as a child when she used fruit juice to paint on pieces of wood or materials her father brought home for her. He brought the other children candy, but she preferred drawing supplies because "it lasted longer than candy."

She left home at the age of twelve to begin working as housekeeper. She kept that same occupation for fifteen years until she met and married Thomas Salmon Moses in 1887. They met while working together on the same farm. The couple relocated in 1887 to Staunton, Virginia to manage a horse ranch. They had ten children but five did not live past infancy.

Thomas Moses missed New York and persuaded his wife to return in 1905. They bought a farm close to where Mother Moses, as she was called at that time, was born in Eagle Bridge. The farm was called "Mount Nebo" after the mountains in the Bible where Moses is believed to have died.

Thomas Moses suffered a fatal heart attack in 1927. Grandma Moses began painting after his death as her beloved pastime of embroidery became too painful due to arthritis. She had been embroidering in wool pictures that were reminiscent of Currier and Ives prints of country scenes, but then began spending hours a day painting and became quite prolific. Her first paintings were reproductions of prints and post cards she admired. Soon, however, she began to paint her own original works all drawn from her memories of farm life as a child. She offered her work to friends and family, submitted them at the local fairs and finally put them in the window of a family owned drugstore. They were priced from three to five dollars, depending on size.

Her artwork was discovered by Louis J. Caldor, a collector who noticed her paintings in a Hoosick Falls drugstore window in 1938. Caldor was so impressed by Grandma Moses' work he went to her home. She was not at home but Caldor met her sister who informed him that Moses had ten paintings completed and would meet with him later that day. When Moses returned home she panicked because she had completed only nine. Thinking quickly she carefully sliced one painting in half and put it in a decorative frame. When Caldor returned he bought all ten paintings. That was the beginning of Grandma Moses' art career.

In 1939 she had three showings in the Museum of Modern Art in New York City. One year later she had her first solo exhibition sponsored by the art dealer Otto Kallir at his Galerie Saint-Etienne in New York. This brought her to the attention of art collectors all over the world, and her paintings were highly sought after. She went on to have exhibitions of her work throughout Europe and even in Japan, where her work was particularly well received. She continued her abundant output of paintings, the demand for which never diminished during her lifetime.

President and Mrs. Harry S. Truman invited Grandma Moses to an afternoon tea in 1949 at which the President played the piano for her. Later during that visit the President awarded her with the Women's National Press Club Award for outstanding accomplishment in art. In 1951, she appeared on See It Now, a television program hosted by Edward R. Murrow.

"Grandma" Moses celebrated her one hundredth birthday on the seventh of September, 1960. Life magazine commissioned Cornell Capa to make a portrait of Moses for the occasion, which it printed as a cover article. New York governor Nelson Rockefeller also proclaimed the day "Grandma Moses Day" in her honor.

In 1949 Grandma Moses was honored with an honorary doctoral degrees from Russell Sage College and from the Moore Institute of Art, Science and Industry, Philadelphia, in 1951. She became a member of the Daughters of the American Revolution and the Society of Mayflower Descendants after it was discovered that she was a descedant of the Mayflower and others urged her to participate in the local chapters.

"Life's History," her autobiography, was published in 1951 by Harper & Brothers. She is quoted as saying:

"I look back on my life like a good day's work, it was done and I feel satisfied with it. I was happy and contented, I knew nothing better and made the best out of what life offered. And life is what we make it, always has been, always will be."

She died at Hoosick Falls, New York on December 13, 1961 and is buried at the Maple Grove Cemetery. Her gravestone is inscribed with this epitaph: "Her primitive paintings captured the spirit and preserved the scene of a vanishing countryside." She had outlived most of her children.

For a sense of the current value of her paintings, a September 2nd 1942 piece entitled "The Old Checkered House, 1862" was appraised at the Memphis 2004 Antiques Roadshow. The painting was unique in that it showed a summer scene, as she was well known for her winter landscapes. Originally purchased in the 1940s for $110, the piece was assigned an insurance value of $60,000 by appraiser Alan Fausel.