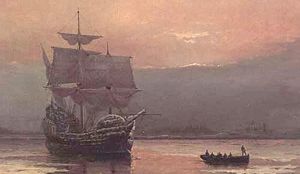 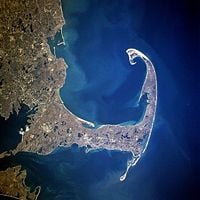 Mayflower arrived inside the tip of Cape Cod fishhook on November 11, 1620

Mayflower was the famous ship that transported the Pilgrim Fathers from Plymouth, England, to Plymouth Colony, Massachusetts (United States), in 1620. Mayflower was not originally intended for passengers and was used primarily as a cargo ship, involved in active trade of goods (often wine) between England and other European countries (principally France, but also Norway, Germany, and Spain).

The vessel disembarked from England on September 6, and after a grueling journey marked by disease, the ship dropped anchor on November 11 inside the hook tip of Cape Cod at what is now called Provincetown Harbor.

Mayflower was purchased by Christopher Jones and several of his business partners in 1607. The ship's first voyage under Captain Jones was to Norway, in 1609, to transport lumber, tar, and fish back to England. The return trip was nearly fatal for the crew of Mayflower as it was caught in a winter storm on the way home. They survived and arrived back in England after several weeks of being veered off course. Not wanting to encounter another fierce winter storm, the captain never sailed the North Sea again. The ship sailed to France and Spain for the next ten years until in May 1620, the Pilgrims met Captain Jones and hired him to transport them to America.

The Mayflower Memorial in Southampton

The original destination of the Pilgrim's voyage on the Mayflower was the Hudson River by agreement with the Dutch who had established a colony there, north of the Jamestown Settlement. However, Mayflower went drastically off-course during a mid-crossing Northeaster storm and made land on the sheltered side of what is now known as Cape Cod. As the winter approached they remained in Cape Cod Bay.

The voyage to the New World was a perilous undertaking for its 102 passengers and 30 crew members. It was reported that at times it seemed the ship would tip over with the rough seas and strong gusts of wind. The Pilgrims ate the same food everyday: sea biscuits, salted meat, dried fish and cheese. Due to the exposure and cramped conditions, many of the passengers remained ill for weeks on end. However, there was only one death on the Mayflower voyage, 22-year-old William Butten, the servant of Deacon Samuel Fuller. Butten was buried at sea.

On March 21, 1621, the passengers who had inhabited the ship during the winter moved ashore at Plymouth Colony, and on April 5, Mayflower returned to England.

The main record for the voyage of Mayflower and the disposition of the Plymouth Colony comes from William Bradford, a guiding force and later the governor of the colony.

Initially, the plan was for the voyage to be made in two vessels, the other being the smaller Speedwell. The first voyage of the ships departed Southampton, England, on August 5, 1620; but the Speedwell developed a leak, and had to be refitted at Dartmouth. On the second attempt, the ships reached the open waters of the Atlantic Ocean but again were forced to return to Plymouth because Speedwell again sprang a leak. After reorganization, the final 36 day voyage was made by Mayflower alone.

During the crossing, the ship was forced far off-course by inclement weather and drifted well north of the intended Virginia settlement. As a result of the delay, the settlers did not arrive in Cape Cod until the onset of a harsh New England winter. The settlers ultimately failed to reach Virginia where they had already obtained permission from the London Company to settle.

To establish legal order and to quell increasing strife within the ranks, the settlers wrote and signed the Mayflower Compact after the ship dropped anchor at the tip of Cape Cod on November 11, in what is now Provincetown.

The settlers, upon initially setting anchor, explored the snow-covered area and discovered an empty Native American village. The curious settlers dug up some artificially-made mounds, in some they discovered stored corn, while others were found to be burial sites. The settlers took the corn, which sparked friction with the natives. They explored the area of Cape Cod for several weeks and decided to relocate after a difficult encounter with the now-unfriendly local Native Americans from the Nauset tribe.

The 102 passengers on Mayflower were the earliest permanent European settlers in New England; some of their descendants have taken great interest in tracing their ancestry back to one or more of these Pilgrims. Throughout the winter, the passengers spent time ashore preparing homesites and searching for food but remained aboard Mayflower. Only about half of the settlers were still alive when Mayflower returned to its home port in the spring. Governor Bradford noted that about half the sailors died.