Ewha Womans University (Korean: 이화여자대학교, Hanja: 梨花女子大學校), refers to a private women's university in central Seoul, South Korea. One of the city's largest institutions of higher learning, the world's largest female educational institute, Ewha ranks with the best-known universities in South Korea, and the top women's university. Mary F. Scranton, a Methodist Episcopal missionary from the United States, founded Ewha in 1886. The pear blossom represents the school flower, a Sino-Korean term for the school's name. While "Womans" seems grammatical mistake in the name, in the late nineteenth century, at the time of the university's founding, "womans" (as opposed to women's or woman's) constituted the correct English spelling.

Methodist Missionaries Mary Scranton, and Henry G. and Ella D. Appenzeller, established Ewha Hakdang and brother school, Paichai Hakdang, in 1886. Evangelical Protestant missionaries, they had received an invitation to come to Korea as teachers, not missionaries. Looking at the teacher work as a cover for evangelical work at first, Mary Scranton and the Appenzellers quickly came to see the educational work as essential to transforming Korea into a Christian society. Ewha University, having celebrated its 120th anniversary, has been playing a leading role in bringing Christian values to Korean society through Korean women. 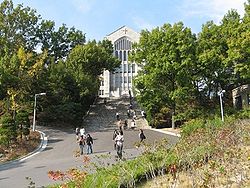 Ewha Womans University traces its roots back to Mary Scranton's Ihwa Hakdang (also Ewha Hakdang; 이화학당 梨花學堂) mission school for girls, opening with only one student on May 31, 1886.[1] Emperor Gojong bestowed The name, meaning “Pear blossom academy,” the following year. The school began to provide college courses in 1910 and professional courses for women in 1925. Immediately following the liberation of Korea on August 15, 1945, the college received government permission to become a university, the first South Korean university officially organized.

A Timeline of Key Events for Ewha follows: 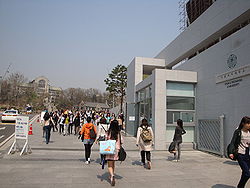 Ewha's Nanoscience program won the spot in the Ewha specialization project in 2003. The university established the Division of Nanoscience, the graduate school, in the same year. The Nanoscience program achieved excellent performance in a short period in industry-academia cooperation with fifteen companies such as Amorepacific, Leadgene, Scinco, and Bipolymed. Life Science and Nanoscience have noted as departments of strength in engineering and natural science programs.

Ewha's life science recorded the highest Impact Factor, a quantitative measure of the frequency with which the "average article" published in a given scholarly journal has been cited in a particular year or period, in Korea. Ewha University holds six international patents and thirteen domestic patents. 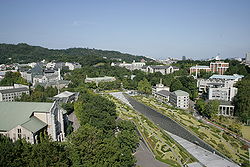 The undergraduate departments of Ewha divide into eleven colleges, one division with sixty-five departments. The graduate school offers thirteen programs. A list of the college departments follows:

Scranton College opened its doors on March 1, 2007. The College was named after Mary F. Scranton, the missionary who founded Ewha 120 years ago. As a unique program that stands at the core of ‘Global Ewha 2010 Project,’ Scranton College is designed to educate students and enable them to become effective leaders in a globalized world. There are two main programs in the College: the Scranton Honors Program which encompasses a multitude of disciplines, and the Division of International Studies which is specifically aimed at equipping students with the capacity to compete in the global arena.

The Division of International Studies (DIS) was first established in March 2001 as an undergraduate program where English is the language of instruction. It was the first-of-its-kind to be established in Korea. Now, as part of Scranton College, DIS provides individualized curricula for the students in order to help them gain international expertise in their area of choice.

Retrieved from https://www.newworldencyclopedia.org/p/index.php?title=Ewha_Womans_University&oldid=1096668
Categories:
This page was last edited on 21 January 2023, at 12:29.
Content is available under Creative Commons Attribution/Share-Alike License; additional terms may apply. See Terms of Use for details.