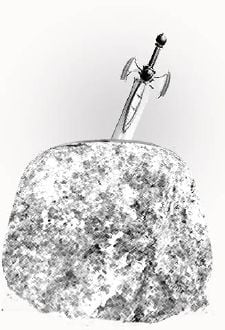 The Sword in the Stone

Excalibur, or Caliburn, is the legendary sword of King Arthur, sometimes attributed with magical powers or associated with the rightful sovereignty of Great Britain. In Welsh, the sword is called Caledfwlch.

The best known version of the story of the sword depicts the wizard Merlin thrusting the as yet unnamed sword into a huge stone, saying that the throne will be claimed by the one who was able to withdraw it. Young Arthur would later prove to be the one to do it. The second story has Arthur obtaining the sword named as Excalibur at a magical lake, where it is given to him by the mysterious Lady of the Lake. Beginning with Sir Thomas Malory's version of the story, the Sword in the Stone and Excalibur became identified as the same weapon.

The sword, made by an elf of Avalon, was later stolen by Arthur's half-sister Morgan le Fay, at which time its magical healing scabbard was lost, although Arthur recovered the sword itself. In the battle of Camlann, Arthur was mortally wounded. As he lay dying, he told his companion Sir Bedivere (Griflet) to return the sword to the lake. When Bedivere did so, an arm rose from the lake to catch the sword, brandishing it three time before it disappeared beneath the waters.

Various stories of a sword like Excalibur exist in Welsh and other legends as well. In recent times, Excalibur and its name have become widespread in popular culture, and used in fiction and films.

The Sword in the Stone

The first surviving account of Arthur's kingly sword is the "Sword in the Stone" legend, originally appearing in Robert de Boron's French poem, Merlin (late twelfth century). In this, which would become the most famous version of the story of how Arthur came to obtain the sword, the wizard Merlin has placed the sword into a huge stone, declaring that only the true heir of Uther Pendragon could reclaim it. Several warriors attempt the task, but it can only be withdrawn by "the true king," the divinely appointed king and true heir to the throne. In the midst of a national crisis, the young Arthur withdraws the sword and soon becomes king.

In this version of the story, the sword is not named, but it came to be identified with Excalibur in Sir Thomas Malory's later account.

The Lady in the Lake 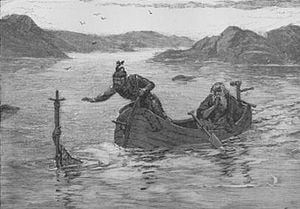 The Lady of the Lake offering Arthur the sword Excalibur.

The second version comes from the later Suite du Merlin, part of the Post-Vulgate Cycle of French Arthurian literature of the early thirteenth century, which—like the legend of the Sword in the Stone—was taken up by Malory in his famous English-language version. Here, Arthur receives the sword from the Lady of the Lake after breaking his earlier sword in a fight with King Pellinore. The Lady of the Lake calls the sword "Excalibur," as to say, "cut-steel," and Arthur takes it from a hand rising out of the lake.

In the Suite du Merlin following the Battle of Bedegraine, Arthur agreed to a peace treaty with King Lot along with the other rebel kings. At this time, Arthur met King Lot's wife, Morgause, and fell in love and slept with her her, resulting in the birth of a child, Mordred. However, Arthur had unknowingly committed incest because Morgause was actually his half-sister. He did not discover this fact until Merlin later rebuked him for his succumbing to lust. Merlin prophesied that Mordred would one day mortally wound his father, destroy his knights, and bring about the downfall of his kingdom.

Arthur also had a half-sister, Morgan le Fay, a sorceress, who loathed her sibling and used a wide range of powers to attack him many times. Arthurian mythology occasionally states that it was Morgan le Fay who seduced Arthur, producing the evil Mordred. However, it is more traditional for Morgause, another sister, to be Mordred's mother. In these classics, Mordred frequently appears as her pawn, helping to bring about the end of Camelot. Morgan le Fay is described as stealing Excalibur's magical scabbard, thus reducing Arthur to a vulnerable mortal during battle.

Did you know?
King Arthur's sword Excalibur comes from another realm, and when Arthur dies it must be returned there

As Arthur lies dying at the end of the saga, he tells Sir Bedivere (Sir Griflet in some versions) to return his sword to the lake by throwing it into the water. Bedivere is reluctant to throw away such a precious artifact, so twice he only pretends to do so. Each time, Arthur asks him to describe what he saw. When Bedivere tells him the sword simply fell into the water, Arthur scolds him harshly. Finally, Bedivere throws Excalibur into the lake. Before the sword strikes the water's surface, a hand reaches up to grasp it and pulls it under. Arthur then leaves on a death barge with three queens to the magical island of Avalon, from where he will one day return to rule in Britain's darkest hour.

Malory records both versions of the legend in his Le Morte d'Arthur, and confusingly calls both swords Excalibur. In a recent version of the story presented in the film Excalibur, the divergent legends are reconciled as which Arthur draws the sword from the stone and later breaks it, and the Lady of the Lake then repairs it and returns it to him. 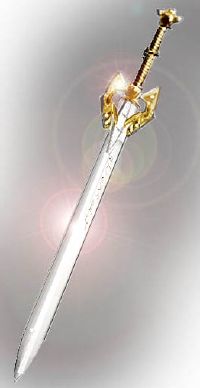 Though not yet called Excalibur, Arthur's magical sword is also known from earlier accounts as well. In Welsh legend, Arthur's sword is known as Caledfwlch. In the Welsh tale Culhwch and Olwen, it is one of Arthur's most valuable possessions and is used by Arthur's warrior Llenlleawg the Irishman to kill the Irish king Diwrnach while stealing his magical cauldron. Caledfwlch itself is thought to derive from the legendary Irish weapon Caladbolg, the lightning sword of Fergus mac Roich. Caladbolg was also known for its incredible power and was carried by some of Ireland's greatest heroes.

Arthur's sword is described vividly in The Dream of Rhonabwy one of the tales associated with the later collection of Welsh tales known as the Mabinogion:

Then they heard Cadwr Earl of Cornwall being summoned, and saw him rise with Arthur's sword in his hand, with a design of two serpents on the golden hilt; when the sword was unsheathed what was seen from the mouths of the two serpents was like two flames of fire, so dreadful that it was not easy for anyone to look. At that the host settled and the commotion subsided, and the earl returned to his tent.[1]

Geoffrey of Monmouth's History of the Kings of Britain (mid twelfth century) is the first non-Welsh source to speak of the sword. Geoffrey relates that the sword was forged in Avalon and Latinizes the name "Caledfwlch" to Caliburn or Caliburnus. When his influential pseudo-history made it to Continental Europe, writers altered the name further until it became Excalibur. The legend was expanded upon in the Vulgate Cycle, also known as the Lancelot-Grail Cycle, and in the Post-Vulgate Cycle, which emerged in its wake. The Post-Vulgate authors apparently added a new account of Arthur's early days, including a new origin for Excalibur, in the form of the story of the Sword in the Stone.

The story of the Sword in the Stone, meanwhile, is paralleled in the Norse Legend of Sigurd, who draws his father Sigmund's sword out of a tree where it is embedded. 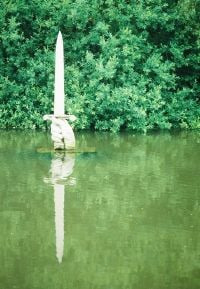 A statue of Excalibur in the gardens at Kingston Maurward.

In several early French works such as Chrétien de Troyes' Perceval, the Story of the Grail and the Vulgate Lancelot Proper section, Excalibur is used by Gawain, Arthur's nephew and one of his best knights. This is in contrast to later versions, where Excalibur belongs solely to the king. In the Alliterative Morte Arthure, Arthur is said to have two legendary swords, the second one being Clarent, stolen by the evil Mordred. In these version, Arthur receives his fatal blow from Clarent.

In many versions, Excalibur's blade was engraved with words on opposite sides. On one side were the words "take me up," and on the other side "cast me away" (or similar words). This prefigures its return into the water. In addition, when Excalibur was first drawn, Arthur's enemies were blinded by its blade, which was as bright as 30 torches. Excalibur's scabbard was said to have powers of its own. Injuries from losses of blood, for example, would not kill the bearer. In some versions, wounds received by one wearing the scabbard did not bleed at all. The scabbard is stolen by Morgan le Fay and thrown into a lake, never to be found again.

Nineteenth century poet Alfred, Lord Tennyson, described the sword in full Romantic detail in his poem "Morte d'Arthur," later rewritten as "The Passing of Arthur," one of the Idylls of the King:

There drew he forth the brand Excalibur,
And o’er him, drawing it, the winter moon,
Brightening the skirts of a long cloud, ran forth
And sparkled keen with frost against the hilt:
For all the haft twinkled with diamond sparks,
Myriads of topaz-lights, and jacinth-work
Of subtlest jewellery. 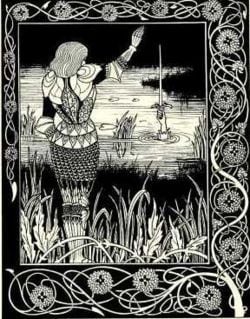 How Sir Bedivere Cast the Sword Excalibur into the Water. Illustration by Aubrey Beardsley, 1894

A number of theories exist as to the etymological origins of the name Excalibur and its relationship to other legendary swords. The name Excalibur came from Old French Excalibor, which in turn derived from Caliburn, used in Geoffrey of Monmouth (Latin Caliburnus). "Caliburnus" meanwhile, seems to be derived from the Latin chalybs "steel," which is in turn may be derived from Chalybes, the name of an Anatolian ironworking tribe. In Sir Thomas Malory's Le Morte d'Arthur, Excalibur is said to mean "cut-steel," which some have interpreted to mean "steel-cutter." There are also variant spellings such as Escalibor and Excaliber.

Another theory holds that Caliburn[us] comes from Caledfwlch, the Welsh name for the sword first mentioned in the Mabinogion, a collection of prose stories from medieval Welsh manuscripts. This may be cognate with Caladbolg ("hard-belly," that is, "voracious"), a legendary Irish sword. Still another theory is related by Ebenezer Cobham Brewer in his Brewer's Dictionary of Phrase and Fable, which holds that the name Excalibur was originally derived from the Latin phrase Ex calce liberatus, "liberated from the stone."

In her book The Ancient Secret, Lady Flavia Anderson postulates that "Excalibur" has a Greek origin, Ex-Kylie-Pyr or "out of a cup—fire." This corresponds to her thesis that the Holy Grail refers to those items used to draw down the Sun in order to make fire. Excalibur, she believed, was a "brand of light" ("brand" is another word for "sword") and associated with Aaron's Rod. Just as only Aaron could make his rod "flower," so only Arthur could pull Excalibur from the stone.

Retrieved from https://www.newworldencyclopedia.org/p/index.php?title=Excalibur&oldid=1096669
Categories:
Hidden category:
This page was last edited on 21 January 2023, at 12:30.
Content is available under Creative Commons Attribution/Share-Alike License; additional terms may apply. See Terms of Use for details.