Topaz is a silicate mineral of aluminum and fluorine, with the chemical formula Al2SiO4(F,OH)2. Typically, its crystals are wine or straw-yellow in color, but they can also come in a variety of other colors, including green, blue, pink, gray, or white. The stones are mainly used as gems in jewelry.

The name "topaz" is derived from the Greek topazos, "to seek," which was the name of an island in the Red Sea that was difficult to find and from which a yellow stone (now believed to be a yellowish olivine) was mined in ancient times. In the Middle Ages the name topaz was used to refer to any yellow gemstone, but now the name is only properly applied to the silicate described above.

Topaz is commonly associated with silicic igneous rocks of the granite and rhyolite type. It typically crystallizes in granitic pegmatites or in vapor cavities in rhyolite lava flows like those at Topaz Mountain in western Utah. It may be found with fluorite and cassiterite. It can be found in the Ural and Ilmen mountains, Afghanistan, Czech Republic, Germany, Norway, Pakistan, Italy, Sweden, Japan, Brazil, Mexico, and the United States.

The biggest topaz crystal ever found, named "El Dorado," was found in Brazil in 1984. It weighs 6.2 kilograms and belongs to the British Royal Collection. 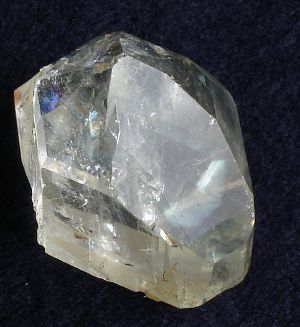 Topaz crystallizes in the orthorhombic system and its crystals are mostly prismatic terminated by pyramidal and other faces, the basal pinacoid often being present. It has an easy and perfect basal cleavage, meaning that gemstones or other fine specimens have to be handled with care to avoid developing cleavage flaws. The fracture is conchoidal to uneven. Topaz has a hardness of 8 on the Mohs scale, a specific gravity of 3.4-3.6, and a vitreous luster.

Pure topaz is transparent but it is usually tinted by impurities that give it a variety of colors and may make it translucent. The colors include wine or straw-yellow, white, gray, green, blue, pink or reddish-yellow. When heated, yellow topaz often becomes reddish-pink. The stone can also be irradiated, giving it a light and distinctive shade of blue. A recent trend in jewelry is the manufacture of topaz specimens that display iridescent colors, by applying a thin layer of titanium oxide via physical vapor deposition.[1]