Mount Rushmore National Memorial, near Keystone, South Dakota, is a monumental granite sculpture that represents the first 150 years of the history of the United States with 60-foot sculptures of the heads of former U.S. presidents George Washington, Thomas Jefferson, Theodore Roosevelt, and Abraham Lincoln. The heads symbolize, respectively, four significant American ideals: independence, democratic process, leadership in world affairs, and equality. The entire memorial covers 1,278 acres and is 5,725 feet above sea level. It is managed by the National Park Service, a bureau of the United States Department of the Interior. The memorial attracts approximately two million people annually.

Known earlier to the Lakota Sioux, on whose land the monument was built, as Six Grandfathers, the mountain was renamed after Charles E. Rushmore, a prominent New York City lawyer, during an expedition in 1885. At first, the project of carving Rushmore was undertaken to increase tourism in the Black Hills region of South Dakota. After long negotiations involving a Congressional delegation and President Calvin Coolidge, the project received Congressional approval. The carving started in 1927 and ended in 1941. Notable for a project of such size, no workers died during the carving. The sculptures of George Washington, Thomas Jefferson, Theodore Roosevelt, and Abraham Lincoln (left to right) represent the leaders of the first 150 years of American history 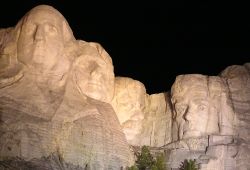 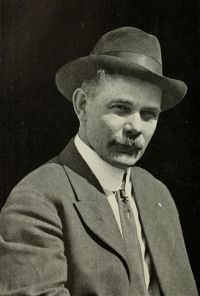 Known to the Lakota as Six Grandfathers, Mount Rushmore was part of the route that Lakota leader Black Elk took in his well-known spiritual journey that culminated at Harney Peak. Following a series of military campaigns in 1876-1877, the United States asserted territorial control over the area, a claim that is still disputed on the basis of the 1868 Treaty of Fort Laramie (see Controversy below). Among white American settlers, the peak was known variously as Cougar Mountain, Sugarloaf Mountain, Slaughterhouse Mountain, and Keystone Cliffs. It was named Mount Rushmore during a prospecting expedition by Charles Rushmore, David Swanzey, and Bill Challis.[1]

Historian Doane Robinson conceived the idea for the monument in 1923 to promote tourism in South Dakota. In 1924, Robinson persuaded sculptor Gutzon Borglum to travel to the Black Hills region to ensure that the carving could be accomplished. Borglum, a member of the Ku Klux Klan,[2] was then involved in sculpting a massive bas-relief memorial to Confederate leaders on Stone Mountain in Georgia.

The original plan was to perform the carvings in natural granite pillars known as the Needles. However, Borglum realized that that plan was impossible because the eroded Needles were too thin to support such sculpting. He chose Mount Rushmore, a grander spot, partly because it faced southeast and enjoyed maximum exposure to the sun. President Coolidge insisted that along with Washington, two Republicans and one Democrat be portrayed.[3]

Between October 4, 1927 and October 31, 1941, Borglum and four hundred workers sculpted the 60-foot, colossal carvings of presidents George Washington, Thomas Jefferson, Theodore Roosevelt, and Abraham Lincoln to represent the first 150 years of American history. The image of Thomas Jefferson was originally intended to appear in the area at Washington's right, but after the work there was begun, the rock was found unsuitable, so his figure was moved to Washington's left.

Did you know?
The original plan for the Mount Rushmore monument was for the figures of the presidents to be carved down to their waists

In 1933, the National Park Service took Mount Rushmore under its jurisdiction. Engineer Julian Spotts helped with the project by improving its infrastructure, such as an upgraded tram to facilitate workers' ascent. By July 4, 1934, Washington's face had been completed and was dedicated. The face of Jefferson was dedicated in 1936, and the face of Lincoln was dedicated on September 17, 1937. In 1937, a bill was introduced in Congress to add the head of women's rights leader Susan B. Anthony, but a rider was passed on an appropriations bill requiring that federal funds be used to finish only those heads that had already been started at that time.[4] In 1939, the face of Roosevelt was dedicated. 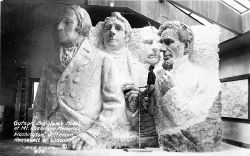 A model at the site depicting Mount Rushmore's original design

Borglum died from an embolism in March 1941. His son, Lincoln Borglum, continued the project, but insufficient funding forced the carving to end. Originally, it was planned that the figures would be carved from head to waist.[5] Borglum had also planned a massive panel in the shape of the Louisiana Purchase commemorating in eight-foot-tall gilded letters the Declaration of Independence, U.S. Constitution, Louisiana Purchase, and seven other territorial acquisitions from Alaska to Texas to the Panama Canal Zone.

On October 15, 1966, Mount Rushmore was listed on the National Register of Historic Places.

Ten years of redevelopment work culminated with the completion of extensive visitor facilities and sidewalks in 1998. Maintenance of the memorial often requires mountain climbing to clean the memorial and remove lichens. On July 8, 2005, a German manufacturer of cleaning machines conducted a free cleanup operation.

Mount Rushmore is controversial among Native Americans and their supporters because the area was seized from the Lakota tribe by the U.S. after the Black Hills War in 1876–1877, in violation of the Treaty of Fort Laramie, which had previously granted the Black Hills to the Lakota in perpetuity. The Lakota consider the hills to be sacred, although historians believe the Lakota also gained control of the hills by force, displacing the Cheyenne in 1776. Members of the American Indian Movement led an occupation of the monument in 1971, naming it "Mount Crazy Horse."

The monument remains controversial among Native Americans, even after the work done by Gerard Baker, the first Native American superintendent of the park, who served in that position from 2004 to 2010.[6] The Crazy Horse Memorial is being constructed elsewhere in the Black Hills to commemorate a famous Native American leader and as a response to Mount Rushmore. It is intended to be larger than Mount Rushmore and has the support of Lakota chiefs; the Crazy Horse Memorial Foundation has rejected offers of federal funds. 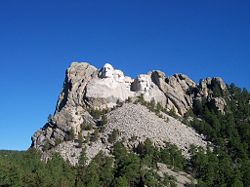 Mount Rushmore, showing full size of mountain and the debris from construction

Mount Rushmore is largely composed of granite. The memorial is carved on the northwest margin of the Harney Peak granite batholith in the Black Hills of South Dakota, so the geologic formations of the heart of the Black Hills region are also evident at Mount Rushmore. The batholith magma intruded into the pre-existing mica schist rocks during the Precambrian period about 1.6 billion years ago.[7] However, the uneven cooling of the molten rock caused the formation of both fine and coarse-grained minerals, including quartz, feldspar, muscovite, and biotite. Fractures in the granite were sealed by pegmatite dikes. The light-colored streaks in the presidents' foreheads are due to these dikes.

The Black Hills granites were exposed to erosion during the late Precambrian, but were buried by sandstones and other sediments during the Cambrian Period. The area remained buried throughout the Paleozoic Era, but was exposed again to erosion during the tectonic uplift about 70 million years ago. The subsequent natural erosion of this mountain range allowed the carvings by stripping the granite of the overlying sediments and the softer adjacent schists.[7] The contact between the granite and darker schist is viewable just below the sculpture of Washington.

Borglum selected Mount Rushmore as the site for several reasons. The rock of the mountain is composed of smooth, fine-grained granite. The durable granite erodes only one inch every ten thousand years, indicating that it was sturdy enough to support sculpting. In addition, it was the tallest mountain in the region, looming to a height of 5,725 feet above sea level. Because the mountain faces the southeast, the workers also had the advantage of sunlight for most of the day. 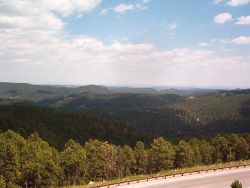 The Black Hills opposite Mount Rushmore

The ecology of Mount Rushmore is similar to that of the rest of the Black Hills region of South Dakota. Birds including the turkey vulture, bald eagle, hawk, and meadowlark fly around Mount Rushmore, occasionally making nesting spots in the ledges of the mountain. Smaller birds, including songbirds, nuthatches, and woodpeckers, inhabit the surrounding pine forests. Terrestrial mammals include the mouse, chipmunk, squirrel, skunk, porcupine, raccoon, beaver, badger, coyote, bighorn sheep, and bobcat. In addition, several species of frogs and snakes inhabit the region. The two brooks in the memorial, the Grizzly Bear and Starling Basin brooks, support fish such as the longnose dace and the brook trout.

At lower elevations, coniferous trees, mainly the Ponderosa pine, surround most of the monument, providing shade from the sun. Other trees include the bur oak, the Black Hills spruce, and the cottonwood. Nine species of shrubs live near Mount Rushmore. There is also a wide variety of wildflowers, including especially the snapdragon, sunflower, and violet. Towards higher elevations, plant life becomes sparser. However, only approximately five percent of the plant species found in the Black Hills are indigenous to the region.[8]

Though the area receives about 18 inches of precipitation on average per year, alone it is not enough to support the abundant animal and plant life. Trees and other plants help to control surface runoff. Dikes, seeps, and springs help to dam up water that is flowing downhill, providing watering spots for animals. In addition, stones like sandstone and limestone help to hold groundwater, creating aquifers.[9]

Forest fires occur in the Ponderosa forests surrounding Mount Rushmore around every 27 years. This was determined from fire scars in tree core samples. These help to clean forest debris located on the ground. Large conflagrations are rare, but have occurred in the past.[10] 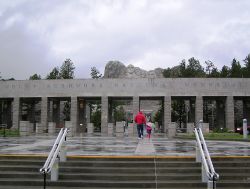 The entrance to the site

Tourism is South Dakota's second-largest industry, with Mount Rushmore being its number one tourist attraction. The site is also home to the final concerts of Rushmore Music Camp and attracts many visitors over the week of the Sturgis Motorcycle Rally.

Mount Rushmore as depicted on the South Dakota state quarter

The Lincoln Borglum Museum is located in the memorial. It features two, 125-seat theaters that show a 13-minute movie about Mount Rushmore. One of the best viewpoints is located at Grandview Terrace, above the museum. The Presidential Trail, a walking trail and boardwalk, starts at Grandview Terrace and winds through the Ponderosa pine forests to the Sculptor's Studio, providing close-up views of the memorial. The Sculptor's Studio was built by Gutzon Borglum, and features discussion about the construction of the monument as well as the tools used. The amphitheater also has a 30-minute program at dusk that describes the construction of the memorial.[11]

Mount Rushmore is illuminated every evening from sunset to 9:00 p.m.[12]