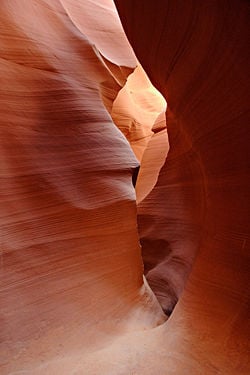 Red sandstone interior of Lower Antelope Canyon, Arizona, worn smooth due to erosion by flash flooding over millions of years

Sandstone is a sedimentary rock composed mainly of sand-size mineral or rock grains. Most sandstone is composed of quartz and/or feldspar, because these are the most common minerals in the Earth's crust. Like sand, sandstone may be any color, but the most common colors are tan, brown, yellow, red, gray, and white.

Some sandstones are resistant to weathering, yet are easy to work. This makes sandstone a common building and paving material. Given the hardness of the individual grains, uniformity of grain size, and friability[1] of its structure, sandstone is an excellent material from which to make grindstones for sharpening blades and other implements. Non-friable sandstone can be used to make grindstones for grinding grain (such as gritstone).

Rock formations that are primarily sandstone usually allow percolation of water and are porous enough to store large quantities. For this reason, they are valuable as aquifers. Fine-grained aquifers, such as sandstones, are more apt to filter out pollutants from the surface than are rocks with cracks and crevices, such as limestones or other rocks fractured by seismic activity.

Sandstone beds often form highly visible cliffs and other topographic features. As a result, certain colors of sandstone have been strongly identified with certain regions of the world. 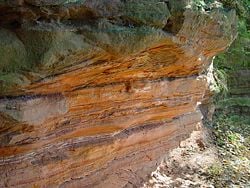 Sandstones are clastic in origin (as opposed to organic, like chalk and coal, or chemical, like gypsum and jasper). They are formed from cemented grains that may be fragments of a pre-existing rock or crystals of a single mineral. The cements binding these grains together are typically calcite, clays and silica. Grain sizes in sands are in the range of 0.1 to 2 millimeters. Rocks with smaller grain sizes include siltstones and shales and are typically called argillaceous sediments. Clays and rocks with larger grain sizes include both breccias and conglomerates and are termed rudaceous sediments. 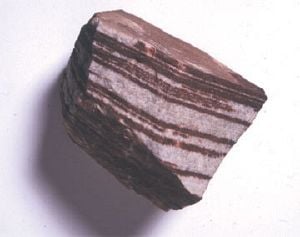 The formation of sandstone involves two principal stages. First, a layer or layers of sand accumulates as the result of sedimentation, either from water (as in a river, lake, or sea) or from air (as in a desert). Typically, sedimentation occurs by the sand settling out from suspension, that is, ceasing to be rolled or bounced along the bottom of a body of water (such as a sea or river) or ground surface (such as in a desert or sand dune region). Finally, once it has accumulated, the sand becomes sandstone when it is compacted by pressure of overlying deposits and cemented by the precipitation of minerals within the pore spaces between sand grains. The most common cementing materials are silica and calcium carbonate, which are often derived either from dissolution or from alteration of the sand after it was buried.

The colors of sandstone are usually tan or yellow, derived from a blend of the clear quartz with the dark amber feldspar content of the sand. A predominant additional colorant in the southwestern United States is iron oxide, which imparts reddish tints, ranging from pink to dark red (terra cotta), with additional manganese imparting a purplish hue. Red sandstones are also seen in the Southwest and West of England, as well as central Europe and Mongolia.

Deposition from sand dunes can be recognized by irregular and fluidly shaped weathering patterns and wavy coloration lines when sectioned. Water deposition forms more regular blocks when weathered. The regularity of the latter favors use as a source for masonry, either as a primary building material or as a facing stone, over other construction.

The environment of deposition is crucial in determining the characteristics of the resulting sandstone. In finer detail, these characteristics include the grain size, sorting, and composition of the stone, and in more general detail, they include the rock geometry and sedimentary structures. Principal environments of deposition may be split between terrestrial and marine, as illustrated by the following broad groupings: 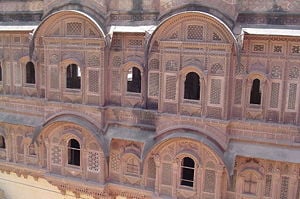 Hawa Mahal in Jaipur, India, is an example of sandstone-based building architecture 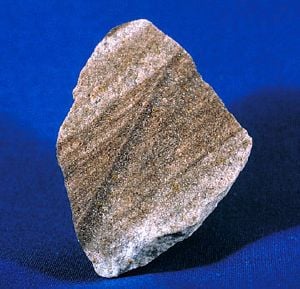 Once the geological characteristics of a sandstone have been established, it can then be assigned to one of three broad groups: