Porcupine is the common name for any members of two families of rodents, Erethizontidae and Hystricidae, characterized by heavy bodies with some areas covered with long, sharp quills or spines (modified hairs). The quills, which are interspersed with coarse hair, can detach from the skin easily when touched and become embedded in a potential predator.

The porcupine is ecologically important as part of terrestrial food chains, consuming vegetative matter like leaves, twigs, bark, fruits, and green plants and, despite its unique defense system, being eaten by fishers, cougars, coyotes, and bobcats. The fisher (a North American marten) is particularly adapt at eating porcupines. All of this adds to the human wonder of nature and to the harmony of nature, reflecting a principle of interdependence, whereby living organisms add value to the ecosystem, and humans, while also pursuing their own continuity as a species.

As rodents, porcupines have incisor teeth that grow continuously throughout their lives and must be kept worn down by gnawing. The incisors have enamel on the outside and exposed dentine on the inside, so they self-sharpen during gnawing. Rodents lack canines and first premolars, which creates a space between their incisors and their grinding teeth.

A porcupine is any of 28 or so species of rodent belonging to the families Erethizontidae or Hystricidae. All defend themselves with sharp spines—actually modified hairs—rather like those of the hedgehogs and the echidnas. However, they are not to be confused with hedgehogs, which are part of the order Erinaceomorpha and more closely related to shrews and moles than they are to the rodents. Likewise, the echidnas, as monotremes, are very distantly related indeed.

Porcupines are all stout animals, with blunt rounded heads, fleshy mobile snouts, and coats of the thick cylindrical or flattened spines ("quills"). The porcupines are the third largest rodent, after the capybara, and beaver, but the species vary in size considerably. Rothschild's porcupine of South America weighs less than a kilogram; the African porcupine can grow to well over 20 kilograms. Most porcupines are about 25-36 inches (60-90 centimeters) long, with a 8-10 inch (20-25 centimeter) long tail. Weighing between 12-35 pounds (5-16 kilograms), they are rounded, large and slow. Porcupines come in various shades of brown, gray, and the unusual white.

The animal's quills or spines take on various forms, depending on the species, but all are modified hairs coated with thick plates of keratin, and are embedded in the skin musculature. Old World porcupines (Hystricidae) have quills embedded in clusters, whereas in New World porcupines (Erethizontidae) single quills are interspersed with bristles, underfur, and hair.

Contrary to popular belief, porcupines are not capable of throwing their quills, but they detach very easily and will remain embedded in an attacker. Porcupine quills are as sharp as needles. Unlike needles, however, the quills of New World porcupines have microscopic, backwards-facing barbs on the tip that catch on the skin making them difficult and painful to extract. Quills are about 75 millimeters long and 2 millimeters wide. If a quill becomes lodged in the tissues of a would-be attacker, the barbs act to pull the quill further into the tissues with the normal muscle movements of the attacker, moving up to several millimeters in a day. Predators have been known to die as a result of quill penetration and infection. Quills are still capable of penetrating animals and humans even after death. 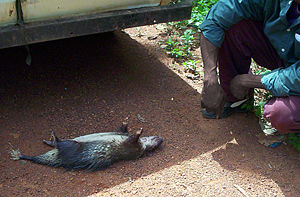 Porcupines occupy a wide range of habitats in tropical and temperate parts of Asia, Italy, Africa and North and South America. Porcupines live in forests, deserts, and grasslands. Some live in trees, while others stay on the ground.

Porcupines in search of salt sometimes encroach on human habitats, eating plywood cured with sodium nitrate (Morrisson and Morrisson 2001), certain paints, tool handles, footwear, clothes, and other items that have been coated in salty sweat. Porcupines are attracted to roads in areas where rock salt is used to melt ice and snow, and are known to gnaw on vehicle tires or wiring coated in road salt. Salt licks placed nearby can prevent porcupine damage. Natural sources of salt consumed by porcupines include varieties of salt-rich plants (such as yellow water lily and aquatic liverwort), fresh animal bones, outer tree bark, mud in salt-rich soils, and objects impregnated with urine (Olson and Lewis 1999).

In parts of Africa and Arabia, porcupines are eaten as a form of bush meat. Porcupine meat is also appreciated in some regions of Italy and Vietnam.

The two families of porcupines are quite different, and although both belong to the Hystricognathi branch of the vast order Rodentia, they are not closely related.

The 12 Old World porcupines are almost exclusively terrestrial, tend to be fairly large, and have quills that are grouped in clusters. They separated from the other hystricognaths about 30 million years ago, much earlier than the New World porcupines.

The 16 or so New World porcupines are mostly smaller (although the North American porcupine reaches about 85 centimeters in length and 18 kilograms), have their quills attached singly rather than grouped in clusters, and are excellent climbers, spending much of their time in trees. The New World porcupines evolved their spines independently (through convergent evolution) and are more closely related to several other families of rodent than they are to the Old World porcupines. 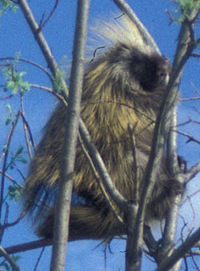 The porcupines are represented in the New World by the members of the family Erethizontidae, which have rooted molars, complete collar-bones, entire upper lips, tuberculated soles, no trace of a first front toe, and four teats. The spines are mixed with long, soft hairs.

They are less strictly nocturnal than Old World species in their habits, and some types live entirely in trees while others have dens on the ground. Their long and powerful prehensile tails help them balance when they are in the tree tops. Their diet consists mainly of bark, leaves, and conifer needles, but can also include roots, stems, berries, fruits, seeds, nuts, grasses, and flowers. Some species also eat insects and small reptiles (MacDonald 2006).

The New World porcupines include four or five genera in three groups. The first group is represented by the Canadian porcupine or North American porcupine (Erethizon dorsatum), a stout, heavily built animal, with long hairs almost or quite hiding its spines, four front toes and five hind toes, and a short, stumpy tail. It is a native of the greater part of Canada and the United States, wherever there is any remnant of the original forest left.

The tree porcupines (Coendou, Sphiggurus, and Echinoprocta) contain 14 or 15 species, depending on the taxonomic scheme. They are found throughout tropical South America, with two extending into Mexico. They are of a lighter build than the ground porcupines, with short, close, many-colored spines, often mixed with hairs, and prehensile tails. The hind feet have only four toes, owing to the suppression of the first, in place of which they have a fleshy pad on the inner side of the foot. Between this pad and the toes, branches and other objects can be firmly grasped as with a hand.

Genus Chaetomys, distinguished by the shape of its skull and the greater complexity of its teeth, contains C. subspinosus, a native of the hottest parts of Brazil. This animal is often considered a member of the Echimyidae on the basis of its premolar. 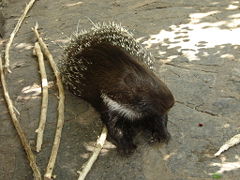 The porcupines are represented in the Old World by the members of the family Hystricidae. They range over the south of Europe, the whole of Africa, India, and the Malay Archipelago as far east as Borneo. Their coats of thick cylindrical or flattened spines, which form the whole covering of their body, are not intermingled with ordinary hairs. Their habits are strictly terrestrial.

The European porcupine (Hystrix cristata) is the typical representative of a family of Old World rodents, the Hystricidae, all the members of which have the same protective covering. These rodents are characterized by the imperfectly rooted cheek-teeth, imperfect clavicles or collar-bones, cleft upper lip, rudimentary first front toes, smooth soles, six teats, and many cranial characters.

Of the diverse genera, Hystrix is characterized by the inflated skull, in which the nasal chamber is often considerably larger than the brain-case, and the short tail, tipped with numerous slender-stalked open quills, which make a loud rattling noise whenever the animal moves.

The European porcupine (H. cristata), which occurs throughout the south of Europe and North and West Africa, is replaced in South Africa by the African crested porcupine, H. africaeaustralis, and in India by the Malayan porcupine, H. leucura.

Besides these large crested species, there are several smaller species without crests in north-east India, and the Malay region from Nepal to Borneo.

The genus Atherurus includes the brush-tailed porcupines, which are much smaller animals, with long tails tipped with bundles of flattened spines. Two species are found in the Malay region and one in Central and West Africa. The latter species, Atherurus africanus, is often hunted for its meat.

The genus Trichys contains one species, Trichys fasciculata of Borneo. This species is externally very similar to Atherurus, but differing from the members of that genus in many cranial characteristics.

Retrieved from https://www.newworldencyclopedia.org/p/index.php?title=Porcupine&oldid=1089438
Categories:
Hidden category:
This page was last edited on 26 November 2022, at 04:07.
Content is available under Creative Commons Attribution/Share-Alike License; additional terms may apply. See Terms of Use for details.