Echidna, also known as spiny anteater, is any of the egg-laying mammals comprising the Tachyglossidae family of the order Monotremata (monotremes), characterized by a stocky build, spiny coat, short legs with strongly clawed feet, rudimentary tail, and toothless jaw with a long and sticky tongue. There are four extant (living) echidna species, that, together with the platypus, are the only surviving monotremes.

The echidna species are not related to the anteater species, even though the two groups of species share a superficial resemblance and the echidna diet consists largely of ants and termites. Echidnas live in New Guinea and Australia (including the island of Tasmania).

Echidnas exhibit bi-level functionality: The pursuit of their own needs for survival, growth, and reproduction positions them to help control populations of ants and termites while, despite their spines, echidna are prey in the food chain for various birds and mammals, such as foxes, dogs, and Tasmanian devils. Additionally, indigenous peoples and early European settlers used echidnas as a source of food, and the echidna's unique form and behaviors continue to fascinate human beings, adding to the mystery and wonder of nature. 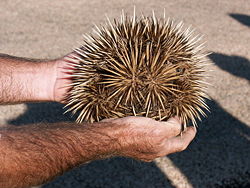 A short-beaked echidna curled into a ball; the snout is visible on the right.

Echidnas are monotremes; that is, they are egg-laying mammals of the order Monotremata. Monotremes represent one of the three major subdivisions of mammals. The other two groups, the marsupials and placentals give birth to live young. The key physiological difference between monotremes and other mammals is that their urinary, defecatory, and reproductive systems all open into a single duct, the cloaca. Other mammal females have separate openings for reproduction, urination, and defecation.

Like other mammals, monotremes are warm-blooded, with a high metabolic rate (though not as high as other mammals); have hair on their bodies; produce milk to feed their young; have a single bone in their lower jaw; and have three middle ear bones.

Echidnas are covered with coarse hair and spines. Superficially, they resemble the anteaters of South America and other spiny mammals like hedgehogs and porcupines.

Echidnas have elongated and slender snouts that have the functions of both the mouth and nose. They have very short, strong limbs with large claws and are powerful diggers. Echidnas have a tiny mouth and a toothless jaw. They feed by tearing open soft logs, anthills, and similar materials, and use their long, sticky tongue which protrudes from their snout, to collect their prey.

The short-beaked echidna's diet consists largely of ants and termites, while the three extant Zaglossus species typically eat worms and insect larvae. The long-beaked echidnas have tiny spines on their tongues that helps capture their meals. The diet of the western long-beaked echidna (Zaglossus bruijni) is almost exclusively earthworms, although they will also eat termites and other insect larva (Cross 2002). The earthworms are positioned to go front first into the snout, by the echidna wrapping its powerful tongue around the front of the worm (Cross 2002).

The echidna female lays a single soft-shelled, leathery egg twenty-two days after mating and deposits it directly into her pouch. Hatching takes ten days. The young echidna, called a puggle as with the platypus infant, then sucks milk from the pores of the two milk patches (monotremes have no nipples) and remains in the pouch for forty-five to fifty-five days, at which time it starts to develop spines. The mother digs a nursery burrow and deposits the puggle, returning every five days to suckle it until it is weaned at seven months.

Male echidnas have a four-headed penis, but only two of the heads are used during mating, with the female reproductive tract having only two branches. The other two heads "shut down" and the other two fit, with the heads being used switched each time the mammal has sex (Shultz 2007).

The echidnas are named after a monster in ancient Greek mythology.

Echidnas are classified into three genera. The Zaglossus genus includes three extant species and two species known only from fossils, while only one species from the genus Tachyglossus is known. The third genus, Megalibgwilia, is only known from fossils.

The three living Zaglossus species are endemic to New Guinea. They are rare and are hunted for food. They forage in leaf litter on the forest floor, eating earthworms and insects.

The three extant species are:

The two fossil species are: 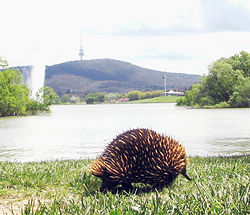 In Australia, the short-beaked echidna may be found in many environments, including urban parkland such as the shores of Lake Burley Griffin in Canberra, as depicted here.

The genus Megalibgwilia is only known from fossils:

Echidnas are eaten by humans, and, in particular, by indigenous peoples and the early European settlers. The meat of the western long-beaked echidna (Zaglossus bruijni), for example, is a popular food in New Guinea (Cross 2002; Augee et al. 1993; Walker 1991). Echidnas also help to control populations of prey species, and themselves serve as food for birds, foxes, cats, dogs, and the Tasmanian devil, despite their spines. However, hunting and habitat loss is causing population declines.