Ecclesiology, in Christian theology, is the study of doctrine pertaining to the Church itself as a community or organic entity, and of how the Church understands itself—that is, its role in salvation, its origin, its relationship to the historical Christ, its discipline, its destiny, and its leadership. Ecclesiology is, therefore, the study of the church as a thing in itself, and of the church's self-understanding of its mission and role.

In its early history, one of the Church's earliest ecclesiological issues had to do with the status of Gentile members in what had been essentially a Jewish messianic movement. It later contended with such questions as whether it was to be governed by a council of elders or a single bishop, how much authority did the bishop of Rome have over other major bishops, the role of the Church in the world, whether salvation was possible outside of the institution Church, the relationship between the Church and the State, and question of theology, liturgy, disciple, and other issues.

Ecclesiology may be used in the specific sense of a particular church or denomination’s character, self-described or otherwise. This is the sense of the word in such phrases as Roman Catholic ecclesiology, Lutheran ecclesiology, and ecumenical ecclesiology. 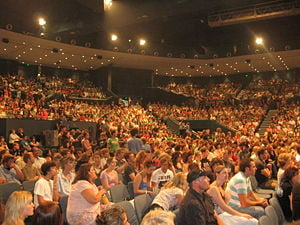 Traditionally, it was the assembly of God's people, not a building or denomination, which constituted a "church."

Ecclesiology comes from the Greek ἐκκλησία (ekklesia), which entered Latin as ecclesia. The term originally meant simply a gathering or assembly. It is a compound of the Greek preposition ἐκ (ek), which denotes origin, and καλῶ (kalo)—from καλέω (kaleo)—meaning to call, so that the compound word means a calling out, as to a meeting.

The Greek word ἐκκλησία is used in its generic sense in Acts 19, once of a regular lawful assembly of the people (verse 39) and twice (verses 32 and 41) of a riotous coming together of the townsfolk.

The Greek Septuagint version of the Hebrew Bible used ἐκκλησία for the Hebrew word קהל (qâhâl), meaning a congregation, assembly, company, or other organized body. In context, these uses refer to a specific gathering for a particular circumstance. Many Christian theologians see the Jewish people as a prototype of what would one day be the Christian Church. Historically, the early Christianity began as a sect within Judaism and inherited many of the liturgical and organizational features of Jewish synagogues. 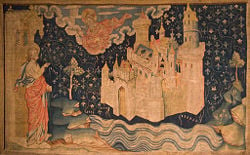 One of the first ecclesiological issues facing the Christian community had to do with the relations between Jewish and Gentile believers in Jesus. For several years, virtually all followers of Jesus were Jews. Once Gentiles began to join in large numbers, the question arose as to whether Gentile believers needed to become Jews—specifically, by following Jewish ceremonial law and accepting circumcision—in order to become full members of the believing community. At the Council of Jerusalem, it was determined that Gentile believers did not need to be circumcised, but did need to honor the Jewish commandments regarding fornication, worshiping idols, and certain dietary restrictions: "You are to abstain from food sacrificed to idols, from blood, from the meat of strangled animals and from sexual immorality" (Acts 15:29). Synagogia, the depiction of the Jewish congregation as blind and rejected by God

This, however, did not resolve the issue entirely. Paul's letters demonstrate that a faction of the church still insisted on circumcision of new believers. Paul affirmed that his personal spiritual experience with Jesus is what made him an apostle rather than any appointment by those who followed Jesus in life. At Antioch, Paul and Peter had a heated public disagreement over the issue of table fellowship—whether Jewish Christians were allowed to eat at the same table with their Gentile counterparts, a violation of the strict interpretation of Jewish scripture (Galatians 2:11ff). Paul was later arrested in Jerusalem after being commanded by the Jerusalem church to engage in a public purification ceremony according to Jewish law, in order to demonstrate that he himself lives as a Jew and did not teach that Jews should stop observing the Mosaic law (Acts 21:24).

After the destruction of the Temple of Jerusalem in 70 C.E., however, the Jerusalem Christian community—which had been the central church of the earliest Christian tradition—was scattered. Christian Judaism gradually lost its influence, Pauline ecclesiology came to the fore, and Christianity came to be an essentially Gentile religion. Eventually, the Christian community came to view itself as a spiritual society that replaced Israel as the people of God.

Emergence of the episcopacy

From the beginning of the second century, such issues as the person of Christ, the Trinity, and the canon were more pressing concerns than ecclesiology per se. In this process, the church came to see itself as the repository of true Christian doctrine and teaching. However, other ecclesiological issues often underlay theological controversies. For example, some communities of Gnostic Christians allowed female clergy and denied the orthodox doctrine of apostolic succession. Gnostics insisted that spiritual knowledge, rather than such traditions as the "laying of hands" is what determined one's authority. Meanwhile, some teachers held that Paul's doctrine of freedom from the Jewish law exempted Christians from the moral commandments as well as the ceremonial rules. The Church rejected this notion, in the process affirmed a continuity between the "old" and "new" covenants, also adopting the Jewish scriptures into its own canon of sacred texts.

Cyprian of Cathage: "He can no longer have God for his Father who has not the Church for his mother."

Another ecclesiological issue in the early church was the issue of the church offices and governance. Early churches, as described in the the Book of Acts and the letters of Paul, included such offices as apostles, teachers, and prophets. Presbyters (elders) and episcopi (overseers/bishops) are also mentioned.

The era of the Christian prophet came to an end in the second century as a result of the Montanist controversy. Bishops such as Cyprian of Carthage taught the doctrine that outside of the true church, there could be no salvation, while Irenaeus of Lyon and others developed the notion of the bishop as the fount orthodox teaching authority.

By the late second century, an ecclesiological tradition emerged among the orthodox churches in which local communities were governed by a single bishop, often in conjunction with a council of presbyters. The bishop thus became the central authority in whom the office of apostle and teacher were combined, while the office of prophet became obsolete. Also the bishops of the largest Christian communities in the Roman Empire—Rome, Byzantium, Alexandria, Jerusalem, and Antioch—emerged as having particular honor and jurisdiction over smaller bishoprics in their regions. These bishops came to be known as metropolitans or patriarchs.

Ecclesiology became a major issue after Constantine I became the emperor of Rome, legalized Christianity, and gave it a privileged status in the empire. Persecution ended and a merger between the church and state began.

In the West, from the Medieval era until the Reformation, the church was identified with the institutional church of the Roman Catholic system. The following beliefs were well accepted: (1) The church is the visible, earthly, external form of the Kingdom of God; (2) the church was viewed as both hierarchical and monarchical in nature; (3) the papacy was viewed as an authoritative and perpetual office; (4) entrance to the church was gained through valid baptism; and (5) the church was necessary for salvation. Within the Roman Catholic Church, this understanding would continue up until the Vatican II Council in 1962.

Eastern Christianity denied the central authority of the Roman bishop, asserting that he was the "first among equals," holding greater honor but no greater authority in matters of theology and church law than other metropolitan bishops. East and West also diverged on the issue of the relationship between the church and the state. Rome—following the "Two Swords" theory of Pope Gelasius I in 492—took the view that the church was spiritually superior to the state and that the emperor must obey the pope on matters of religion. The Eastern Church held to the doctrine of "harmonia" which saw the Emperor himself as "pontifex maximus" of the Christian world. While this did not rule out bishops or monks challenging the spiritual authority of emperors when they strayed from orthodoxy, it generally viewed the role of the state more positively than the western doctrine and looked less pessimistically on the "secular" power. Indeed, the term "secular" itself is a western one coined by Augustine and Hippo in the wake of the barbarian conquest of Rome, which had much less impact in the East.

The differences between East and West on ecclesiology exacerbated other theological, cultural, and jurisdictional frictions, ultimately leading to the Great Schism of 1054.

Protestant Reformation and beyond

The Protestant Reformation challenged the traditional understandings of the church. Luther and other reformers emphasized the "priesthood of all believers," denying the Pope's authority as the single head of the church. Many Protest churches come to reject the episcopal model in ecclesiological. Some adopted presbyterian government—involving a council of elders—while others opted for a congregation style of governance involving a more democratic rule.

Protestants also emphasized the role of scripture as the highest authority outside of one's conscience, while Catholic and Orthodox hold to a greater role for tradition and church councils. Roman Catholic tradition also affirms the special teaching authority of the pope, whose pronouncement, ex cathedra, is considered binding on all Catholics.

The Reformation opened the way to various ecclesiological experiments and forms, ranging from highly democratic and non-hierarchical traditions such as exist in the Quaker, Congregational, and Unitarian traditions to fairly traditional forms in the Anglican and Lutheran churches. Pentecostalism can be seen as an attempt to reaffirm the primitive Christian tradition of governance directly by the Holy Spirit through apostles, teachers, and prophets. More than 600 denominations of Christianity have come into existences, since the Reformation began in 1517, many with distinct ecclesiological characteristics.

At the same time, the twentieth century witnessed the growth of the Ecumenical movement, with its dialogs concerning inter-communion and even the amalgamation of several denominations. In addition to other theological issues, ecclesiology is often a major concern in such discussions.