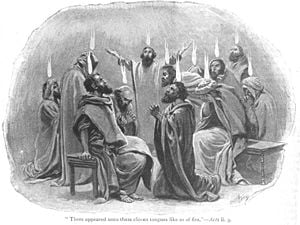 Montanism was an early Christian sectarian movement beginning in the mid-second century C.E., named after its founder Montanus. Its defining characteristics were a belief in continuing revelation, a refusal to compromise with worldly standards, its anti-hierarchical stance against appointed bishops leading the Church, and the practice of ecstatic worship in which its prophets channeled messages from God. The Montanists believed that their founder, together with the two prophetesses Priscilla and Maximilla, were in special and direct communion with the Holy Spirit in a ministry intended to purify the Church in preparation for the coming of Jesus Christ. Montanus himself claimed to be the Paraclete (return of the Holy Spirit) prophesied in John 14:26. The Montanist movement flourished in and around the region of Phrygia in contemporary Turkey, and also spread to other regions in the Roman Empire in the second and third centuries. Strongly devoted to spiritual purity and refusing any compromise with the secular authority, the Montanists counted many martyrs among their adherents. The otherwise fiercely orthodox Tertullian of Carthage supported their cause and beliefs.

Although the bishops eventually declared Montanism to be a heresy, the sect persisted well into the fourth century and continued in some places for another three or four hundred years. The condemnation of Montanism by the orthodox Church put a virtual end to the tradition of Christian prophecy and ecstatic worship.

Montanism offers a very good example from which to study the admixing of religion and power politics in the development of Christianity in its early history and also in its later history as well. Today, some consider Pentecostalism within Protestantism to be similar to Montanism. The tension of the poles of institutionalism (represented by the Church) and spiritual renewal (represented by these spiritual movements) seems to continue within today's Christianity.

Shortly after his conversion to Christianity, Montanus began traveling among the rural settlements of Asia Minor, preaching and testifying. Dates are uncertain, but it appears that the beginning of Montanus' career was either 156-157 C.E. according to St. Epiphanius' Panarion or 172 C.E. according to Eusebius of Caesarea's Chronicle. Accompanied by Priscilla and Maximilla, he offered a charismatic ministry featuring ecstatic spiritual manifestations. He claimed to have received a series of direct revelations from the Spirit. As they went, "the Three," as they were called, spoke in ecstatic trance-like states and urged their followers to fast and pray, so that they might share these personal revelations. His preachings spread from his native Phrygia across the contemporary Christian world, to Africa and Gaul.

Given this rapid spread of Montanism, the orthodox hierarchy fought to suppress it. Bishop Apollinarius of Hierapolis (second century) found the church at Ancyra torn in two, and he opposed the "false prophesy."[1] St. Irenaeus (c. 120-c. 200), then bishop of Lyon, who visited Rome during the height of the controversy, in the pontificate of Eleuterus (his papacy c. 174-c. 189), returned to find Lyon in dissension, and was inspired to write the first great statement of the mainstream Catholic position, Adversus Haereses. Eleuterus, for his part, seems to have approved of the Montanists at first, but was later dissuaded from this view. According to Tertullian (c. 160-c. 225), who joined Montanism in Carthage and became the leader of a Montanist faction in that city, claimed that only false accusations had moved the pope, probably Eleuterus, to condemn the movement: 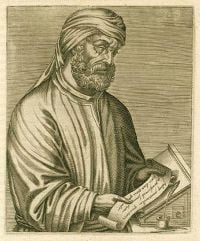 For after the Bishop of Rome had acknowledged the prophetic gifts of Montanus, Prisca, and Maximilla, and, in consequence of the acknowledgment, had bestowed his peace on the churches of Asia and Phrygia, he [Praxeas], by importunately urging false accusations against the prophets themselves and their churches… compelled him to recall the pacific letter which he had issued, as well as to desist from his purpose of acknowledging the said gifts. By this Praxeas did a twofold service for the devil at Rome: He drove away prophecy, and he brought in heresy; he put to flight the Paraclete, and he crucified the Father.[2]

A native of Carthage, Tertullian was by far the best known defender of Montanists. He seems to have become a Montanist around the turn of third century, about 20 years or so after his conversion to Christianity. A respected intellectual champion of orthodoxy in every other respect, he decried the spiritual laxity and corruption that he believed had infected the Catholic Church in his day. He believed that the new prophecy was genuinely motivated and saw it as a remedy to the Church's ills. His later writings grew increasingly caustic in decrying the moral corruption of what he now called "the Church which consists of a number of bishops" vis-à-vis "the Church of the Spirit."[3]

Local councils in Asia Minor reportedly moved against the Montanists as early as 177 C.E. When one such synod excommunicated Priscilla, she reportedly exclaimed: "I am driven off from among the sheep like a wolf; I am not a wolf, but I am speech, and spirit, and power."[4] Nevertheless, the new prophecy retained significant pockets of influence in the region, as well as in North Africa and even Rome. Inscriptions in the Tembris valley of northern Phrygia, dated between 249 and 279 C.E., openly proclaim allegiance of towns to Montanism. Constantine the Great and other emperors later passed laws against the sect, the narrowed definition of official Christianity through Church councils and the canonization of the Christian Bible effectively restricted continuing revelation to papal pronouncements. By the time of Justinian I in the sixth century, this legislation was strictly enforced. Still, small communities of Montanists reportedly persisted into the eighth century in some regions.

Although Montanist writings were reportedly numerous, no works of the early Montanists survive. Tertullian's later writings contain defenses of their doctrines and practices, but his major work in support of Montanus, De Ecstasia, is lost, probably destroyed by Church authorities as essentially heretical. Historians are thus dependent for the most part on critics of the movement, usually writing more than a century after the fact, for information. Citations from the Church historians Eusebius and St. Epiphanius are the most important of these.

An essential teaching of the "new prophecy," as it was called, was that the Paraclete, or Holy Spirit, had come to purify the Church in preparation for the imminent coming of Christ in fulfillment of Jesus' prophecy in John 14:26: "The Comforter [also translated Counselor, Helper, Intercessor, the Holy Spirit, Whom the Father will send in My name, He will teach you all things. And He will cause you to recall everything I have told you."

Montanist leaders channeled revelations from the Holy Spirit urging moral rigor, especially chastity, fasting, and willingness to face martyrdom rather than flee or pay bribes. Remarriage was strictly forbidden, and there is some indication that serious sins—such as murder, honoring Roman deities, adultery, and refusing to confess one's Christianity—may have been considered unforgivable once a believer had been baptized. Ascetic impulses such as those that animated Montanism were later accommodated by the Church through the institution of monasticism. In the second and third centuries, however, such preaching ran counter to the doctrine of universality (Catholicism), which made allowances for the spiritual weaknesses of the majority of believers.

With regard to martyrdom, Montanus is quoted as saying: "Seek not to die on bridal beds, nor in miscarriages, nor in soft fevers, but to die the martyr's death, that He may be glorified who has suffered for you."[5] And regarding chastity and revelations, Priscilla said: "The holy minister knows how to minister sanctity. For purity … is harmonious, and they see visions; and, turning their face downward, they even hear manifest voices."[6] The Montanists were sticking to the principle of holiness and refused to compromise with Roman authorities on questions of honoring Roman state deities. As a result, they counted many martyrs among their numbers. Recent studies suggest that numerous Christian martyrs, including the famous saints Perpetua and Felicitas, who died in Carthage in 203 C.E., may have been Montanists or at least influenced by Montanism.[7]

The Montanists were also accused of going too far when, for example, Montanus declared: "I am the Father, the Word, and the Paraclete," and Maximilla proclaimed: "Hear not me, but hear Christ."[8] It is questionable, however, whether Montanus and his companions claimed such titles for themselves or simply believed that they were channels through whom the Spirit spoke. The Old Testament prophets, after all, punctuated their prophecies by saying: "I am the Lord" (Isaiah 42:8; Ezekiel 20:7; Hosea 12:9), and "I the Lord have spoken" (Ezekiel 5:17, 19). Epiphanius quotes Montanus as describing God's work in him this way: "Behold, the man is like a lyre, and I dart like the plectrum. The man sleeps, and I am awake."[9]

Another idea that troubled the all male fraternity of bishops was that women such as the prophetesses could act as authoritative ministers of Christ. Added to this, Priscilla reportedly claimed a night vision in which Christ slept by her side "in the form of woman, clad in bright garment." This vision revealed that Pepuza, the Montanist headquarters, would be the place that "Jerusalem above comes down."[10]

To summarize: The actions and beliefs of Montanists were suspect by orthodox standards because they allegedly impugned the ultimate teaching authority of the bishops, undermined the principle of the universality of the Church by insisting on strict standards of spiritual purity for believers, allowed female prophetesses an authority greater than that of priests and bishops, and opened the door to doctrinal heresy through their unchecked declarations of ecstatic revelations.

Montanism offers a very good example from which to study the admixing of religion and power politics in the development of early Christianity. It is important for its implications for succession in the early Church and for religious authority in general. The Montanists judged bishops as disqualified if they did not meet a "pure" standard of Christian life. Therefore, it was not only prophecy and ecstatic experience but also its implications for the right of "corrupt" and "impure" leaders to run the Church that led to Montanism's condemnation of the Church. Montanism is one of the most riveting heresies due to its implications for a stable Church community. One one hand, if every leader is to be judged from an "enthused" member from below, the Church stands to split endlessly; on the other hand, if pure hierarchism obtains, the Church runs into the intensely problematic danger of being run by bureaucrats.

Within the Catholic Church, some other movements for spiritual renewal similar to Montanism emerged. One example was the movement of Spiritual Franciscans in the thirteenth and early fourteenth centuries. This spiritual renewal tradition expressed itself in the Protestant Reformation in a way. But then, Protestantism has not been free from institutionalism, either. So, the early anti-ecclesial tendencies found in Montanism have emerged in some parts of Protestantism such as Pentecostalism. Indeed, because of Pentecostalism's practice of enthusiastic communion with the Spirit and its claim of continuing revelation through its prophets, some people have drawn parallels between Pentecostalism and Montanism. The tension between institutionalism and spiritual renewal seems to continue in the Church today.