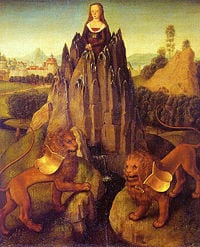 Allegory of chastity by Hans Memling.

Chastity is a virtue concerning the state of purity of the mind and body. Chastity includes abstinence from sexual intimacy for the unmarried, and faithfulness to a marriage partner. Pre-marital virginity (abstinence) is the form of chastity expected of young people. Sexually active married couples are also considered to practice chastity if they remain faithful to their marital vows. Finally, chastity includes abstention from all sexual activity (celibacy).

Chastity is seen as undergirding marriage; sexual acts outside of marriage are considered sinful, both because they are spiritually damaging to the individual and because they undermine and destroy the family. (On the deleterious effects of premarital sex on subsequent marriage, see sexual abstinence).

Traditional societies enforced the norms of premarital virginity and marital fidelity backed by strong community sanctions and even by force of law. These norms of chastity have been expected of the faithful of all the major religions, including Christians, Muslims, Buddhists, Hindus and Confucianists. However, in the modern West, particularly since the sexual revolution of the 1960s, these norms have fallen by the wayside, replaced by widespread acceptance of casual sex before marriage, cohabitation in place of marriage, and extra-marital affairs even when they lead to divorce. In the current cultural climate, some see sexual restraint as unnatural, even unhealthy.

In attempting to combat the current permissive climate, social conservatives in the United States are advocating abstinence-based sex education, and municipalities and churches are promoting marriage education to prepare newlyweds for the challenges of maintaining faithful marriages. These efforts aim at restoring a "marriage culture" where chastity is prized. Strong marriages, undergirded by the virtue of chastity, provide economic, psychological, and social benefits to both the married couple and their children.

The word derives from the Latin castitas, the abstract form of castus, which originally meant a pure state of conformity with the Greco-Roman religion. As the etymological link suggests, castigation, chastisement, and in the extreme case, even castration originally relate to the use of harsh means to preserve or restore this state of purity. This meaning is preserved fully in the parallel term "chastening."

In ancient times, the value of chastity was highly debated in both the homosexual and heterosexual spheres. In particular, Socrates was an advocate of chastity between male teachers and their students, in opposition to the sexually expressed pedagogic relationships prevalent in his time. Plato, having transmitted many of these teachings, has become the eponym for this type of chastity, known today as Platonic love (as opposed to romantic love).

Religious teachings maintain that fidelity within marriage is vital to the health of the marriage and ensuing family. Beliefs in the sacredness of marriage and human sexuality provide reasons for abstinence prior to marriage, fidelity to one's spouse after marriage, and lifelong abstinence if a person does not marry.

In the context of traditional marriage, the spouses commit to a lifelong relationship which excludes the possibility of sexual intimacy with other persons. 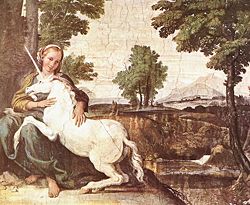 Virgin with a unicorn. In western mythology, the unicorn is a symbol of virginity.

Virginity, the physical state of innocent sexual purity, has often been a requirement for certain religious functions, especially as priests and priestesses. For example, Vestal Virgins in Ancient Rome were required to be virgins, and remain so until they left office at about age 40.

The status of virginity is respected and valued in certain societies, particularly when there are religious views regarding sexual conduct before marriage. A woman who is a virgin is also sometimes referred to as a maiden.

Female virginity is closely interwoven with personal or even family honor in many cultures. Traditionally in some cultures, there has been a widespread belief that the loss of virginity before marriage is a matter of deep shame. In some cultures (for example the Bantu of South Africa), virginity testing or even surgical procedures guaranteeing premarital abstinence (infibulation—The stitching together of the vulva, often after a clitoridectomy, leaving a small opening for the passage of urine and menstrual blood, or the similar stitching of the prepuce)[1] are commonplace. This would typically involve personal inspection by a female elder.

In Western marriage ceremonies, brides traditionally wear veils and white wedding dresses, which are believed by many to be symbols of virginity. In fact, wearing white is a comparatively recent custom among western brides, who previously wore whatever colors they wished or simply their best dress. Wearing white became a matter first of fashion and then of tradition over the course of the nineteenth century.

Celibacy refers to an individual having decided to refrain from sexual activity (sexual abstinence), or to remain unmarried. Also known as "consecrated virginity," celibacy usually refers to ordained clergy or persons in religious orders, and is an avowed way of living in which the person forsakes all sexual gratification. 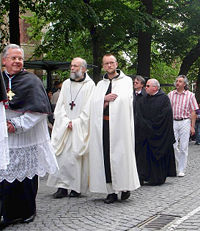 Chastity is a requirement for monks and some priests in many religious traditions.

Some religions require celibacy of their priests, regarding sexual purity as essential in order to perform the rites and rituals that connect the people to heaven. Others regard the priestly function more in terms of ministering to the people, and thus a healthy marriage is considered as good if not better than celibacy. In monastic orders, a vow of sexual abstinence is often viewed as essential in order to align one's mind and spirit to the path of spiritual growth, renouncing cares of the physical world, which include sexual relationships. Philosophers, too, have taken this path.

The Roman Catholic Church requires a promise of celibacy prior to ordination to the diaconate by both secular clerics and "religious" in perpetual vows. Married men can be ordained only by dispensation of the Holy See. By contrast, marriage is accepted or even encouraged for priests in the Anglican and many Protestant churches. In the Eastern Orthodox Church traditions, celibacy is not required of secular priests but is required in monastic orders, from which bishops are selected. In virtually all Christian traditions, celibacy is usually required of monastics—monks, nuns, and friars.

Vows of chastity (celibacy) can also be taken by laypersons, either as part of an organized religious life (such as Roman Catholic Beguines and Beghards) or on an individual basis, as a voluntary act of devotion and/or as part of an ascetic lifestyle, often devoted to contemplation. The voluntary aspect has led it to be included among the counsels of perfection.

In some religions, celibate monastic life is commonly practiced as a temporary phase, as by many men in Buddhism.

Traditionally, acts of a sexual nature are prohibited outside of marriage in Islamic and Judeo-Christian ethical contexts, and are considered sinful. Since offenses against the virtue of chastity are most often expressed as fornication or adultery, the term has become closely associated with sexual abstinence in common usage throughout most of the English-speaking world.

According to Jewish law, sex and acts that are likely to lead to sex are only allowed within the context of a marriage. Sex is not merely a means of physical gratification, but an important act that requires commitment and responsibility. The requirement of marriage before sex ensures that sense of commitment and responsibility. Out of respect for a woman's body, Jewish law also forbids sexual relations among married persons during or shortly after menstruation, and for a period of time after the birth of a child.

The Qur'an states, "the believers are… those who protect their sexual organs except from their spouses… Therefore, whosoever seeks more beyond that… are the transgressors" (23:5-6). Muslim scholars say this statement makes it very clear that any sexual gratification outside marriage is considered a transgression of the law of God.

Hinduism: Hinduism's view on premarital sex is rooted in its concept of the stages of life. The first of these stages, known as brahmacharya, roughly translates as chastity. Celibacy is considered to be the appropriate behavior for both male and female students during this stage, which precedes the stage of the married householder. Many Sadhus (Hindu monks) are also celibate as part of their ascetic discipline. At the same time, it should be noted that prior to the arrival and spread of Islam in India, Hinduism was, by and large, a religion that celebrated the practice of sexuality within the context of marriage, producing famous manuals on the art of lovemaking such as the Kama Sutra. In classical Hinduism, sexual intercourse was seen as a sacred act.

Jainism: Although the Digambara followers of Jainism are celibate monks, most Jains belong to the Shevtambara sect, which allows spouses and children. The general Jain code of ethics requires that one do no harm to any living being in thought, action, or word. Adultery is clearly a violation of a moral agreement with one's spouse, and therefore forbidden, and fornication too is seen as a violation of the state of chastity.

Buddhism: The teachings of Buddhism include the noble eightfold path, involving a prohibition against sexual misconduct. All Theravada and most Mahayana Buddhist orders of monks and nuns are expected to be celibate, and the violation of this state is considered to produce very negative karmic consequences. The Vajrayana orders allow exceptions to this rule as an upaya (skill in means) in achieving higher stages of enlightenment. These orders may permit monks and nuns to marry and practice Tantric sex between them. Promiscuous and unskillful relations tainted by lust would be against the dharma. Hence, almost all Buddhist societies hold to traditional views about marriage and family life, considering both adultery and fornication to be unchaste acts.