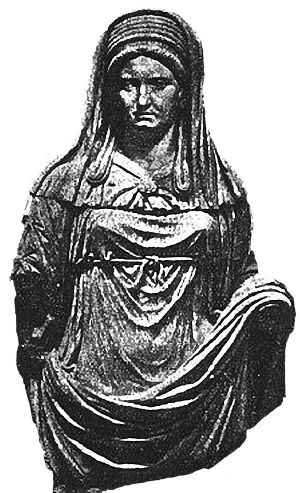 Image of a Roman Vestal Virgin

In the Roman Empire, the Vestal Virgins (sacerdos Vestalis), were holy female priests who honored Vesta, the goddess of the hearth. Their primary task was to maintain the sacred fire of Vesta. The Vestal duty brought great honor and afforded greater privileges to women who served in that role. They were the only female priests within the Roman religious system.

The Order of the Vestal Virgins and its well-being was considered to have a direct bearing on the health and prosperity of Rome and the Roman Empire. The Vestal Virgins became a powerful and influential force in the Roman state. For example, when the dictator Sulla included the young Julius Caesar on his death list of political opponents, the Vestals interceded on Caesar's behalf and gained him pardon.[1] Augustus included the Vestals in all major dedications and ceremonies.

The discovery of a "House of the Vestals" in Pompeii made the Vestal Virgins a popular subject in the eighteenth and nineteenth centuries. Due to the nature of their work, the term "vestal" is sometimes used to describe someone who maintains an archaic tradition.[2] 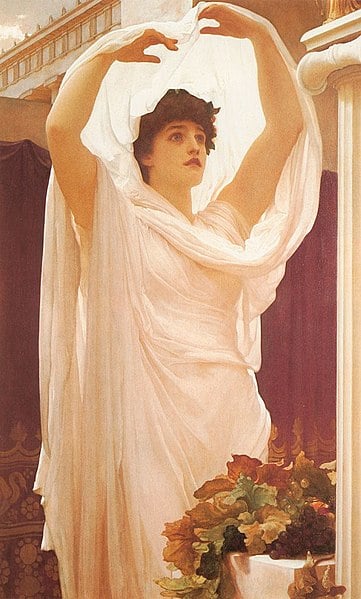 A vestal in a nineteenth century engraving by Frederick Leighton.

Plutarch attributes the founding of the Temple of Vesta to Numa Pompilius, who appointed at first two priestesses to which were added another two with Servius raising the total to six.[3] Ambrose alludes to a seventh towards the end of the pagan era. The second century Roman antiquarian Aulus Gellius writes that the first vestal virgin taken from her parents was led away in hand by Numa Pompilius. Numa also appointed the Pontifex Maximus to preside over rites, prescribe rules for public ceremony, and watch over the Vestals. The first Vestals, according to Varro, were Gegania, Veneneia, Canuleia, and Tarpeia.

Zosimus records[4] how the Christian noblewoman Serena, niece of Theodosius I, entered the temple and took from the statue of the goddess a necklace and placed it on her own neck. An old woman appeared, the last of the Vestal Virgins, who proceeded to rebuke Serena and called down upon her all just punishment for her act of impiety.[5] According to Zosimus, Serena was then subject to dreadful dreams predicting her own untimely death. Augustine would be inspired to write The City of God in response to murmurings that the capture of Rome and the disintegration of its empire was due to the advent of the Christian era and its intolerance of the old gods who had defended the city for over a thousand years.

The Chief Vestal (Virgo Vestalis Maxima) oversaw the efforts of the Vestals, and was present in the Collegium Pontificum. Chief Vestal Occia presided over the Vestals for 57 years, according to Tacitus. The last known Chief Vestal was Coelia Concordia in 380 C.E. The College of Vestal Virgins ended in 394 C.E., when the fire was extinguished and the Vestal Virgins disbanded by order of Theodosius I.

The Vestal Virgins were committed to the priesthood at a young age (before puberty) and were sworn to celibacy for a period of 30 years. These 30 years were, in turn, divided into three periods of a decade each: Ten as students, ten in service, and ten as teachers. Afterwards, they could marry if they chose to do so.[6] However, few took the opportunity to leave their respected role in very luxurious surroundings. This would have required them to submit to the authority of a man, with all the restrictions placed on women by Roman law. On the other hand, a marriage to a former Vestal Virgin was highly honored.

The high priest (Pontifex Maximus) chose each new Vestal Virgin by lot from a group of young girl candidates between their sixth and tenth year. To obtain entry into the order the girls were required to be free of physical and mental defects, have two living parents and to be a daughter of a free born resident. They left the house of their father, were inducted by the Pontifex Maximus, and their hair was shorn. The high priest pointed to his choice with the words, “I take you, Amata, to be a Vestal priestess, who will carry out sacred rites which it is the law for a Vestal priestess to perform on behalf of the Roman people, on the same terms as her who was a Vestal on the best terms.”[7] Now they were under the protection of the goddess. Later, as it became more difficult to recruit Vestals, plebeian girls were admitted, then daughters of freed men.[8]

Their tasks included the maintenance of the fire sacred to Vesta, the goddess of the hearth and home, collecting water from a sacred spring, preparation of food used in rituals and caring for sacred objects in the temple's sanctuary. By maintaining Vesta's sacred fire, from which anyone could receive it for household use, they functioned as "surrogate housekeepers," in a religious sense, for all of Rome. Their sacred fire was treated, in Imperial times, as the Emperor's household fire.

The Vestals were put in charge of keeping safe the wills and testaments of various people such as Caesar and Mark Antony. In addition, the Vestals also guarded some sacred objects, including the Palladium, and made a special kind of flour called mola salsa which was sprinkled on all public offerings to a god.

The dignities accorded to the Vestals were significant.

Allowing the sacred fire of Vesta to die out, suggesting that the goddess had withdrawn her protection from the city, was a serious offense and was punishable by scourging.[10] The chastity of the Vestal Virgins was considered to have a direct bearing on the health of the Roman state. When they became Vestal Virgins they left behind the authority of their fathers and became daughters of the state. Any sexual relationship with a citizen was therefore considered to be incest and an act of treason.[11] The punishment for violating the oath of celibacy was to be buried alive in the Campus Sceleratus, or "Evil Fields" (an underground chamber near the Colline gate), with a few days of food and water.

Ancient tradition required that a disobedient Vestal Virgin be buried within the city, that being the only way to kill her without spilling her blood, which was forbidden. Unfortunately, this practice contradicted the Roman law, that no person may be buried within the city. To solve this problem, the Romans buried the offending priestess with a nominal quantity of food and other provisions, not to prolong her punishment, but so that the Vestal would not technically die in the city, but instead descend into a habitable room. Moreover, she would die willingly. Cases of unchastity and its punishment were rare.[12] The Vestal Tuccia was accused of fornication, but she carried water in a sieve to prove her chastity.

The method by which it was established that a Vestal had committed an offense would be considered unscientific by modern standards. Since a Vestal’s virginity was thought to be directly correlated to the sacred burning of the fire, if the fire were extinguished it might be assumed that either the Vestal had acted wrongly or that the Vestal had simply neglected her duties. While the order of the Vestal Virgins was in existence for over one thousand years there are only ten recorded convictions for unchastity and these trials all took place at times of political crisis for the Roman state. It has been suggested[11] that Vestal Virgins were used as scapegoats[13] in times of great crisis.

The earliest Vestals at Alba Longa were said to have been whipped to death for having sex. The Roman king Tarquinius Priscus instituted the punishment of live burial, which he inflicted on the priestess Pinaria. However, whipping with rods sometimes preceded the immuration, as was done to Urbinia in 471 B.C.E.[14]

Suspicions first arose against Minucia through an improper love of dress and the evidence of a slave. She was found guilty of unchastity and buried alive.[15] Similarly Postumia, who though innocent according to Livy, was tried for unchastity with suspicions being aroused through her immodest attire and less than maidenly manner. Postumia was sternly warned “to leave her sports, taunts, and merry conceits.” Aemilia, Licinia, and Martia were executed after being denounced by the servant of a barbarian horseman. A few Vestals were acquitted. Some cleared themselves through ordeals.

The paramour of a guilty Vestal was whipped to death in the Forum Boarium or on the Comitium.[16]

The chief festivals of Vesta were the Vestalia celebrated June 7 until June 15. On June 7 only, her sanctuary (which normally no one except her priestesses, the Vestal Virgins, entered) was accessible to mothers of families who brought plates of food. The simple ceremonies were officiated by the Vestals and they gathered grain and fashioned salty cakes for the festival. This was the only time when they themselves made the mola salsa, for this was the holiest time for Vesta, and it had to be made perfectly and correctly, as it was used in all public sacrifices.

House of the Vestals 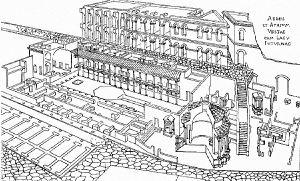 A reconstruction by Christian Huelsen from 1905. 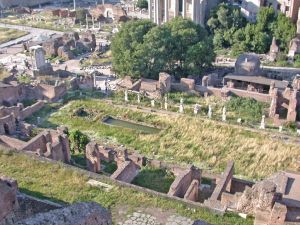 House of the Vestals and Temple of Vesta from the Palatine.

The House of the Vestals was the residence of the Vestal priestesses in Rome. Behind the Temple of Vesta (which housed the sacred fire), the Atrium Vestiae was a three-story building at the foot of the Palatine hill.

Early Roman and Pre-Roman Vestals were rarely named in Roman histories. Among them were:

In the Late Republic, Vestals became more notorious, accused either of unchastity or marrying notorious demagogues.