Andreas Vesalius (Brussels, December 31, 1514 – Zakynthos, October 15, 1564) was an anatomist, physician, and author of one of the most influential books on human anatomy, De humani corporis fabrica (On the Workings of the Human Body). Often referred to as the founder of the modern study of human anatomy, his dissections of the human body and descriptions of his findings helped to correct misconceptions prevailing since ancient times.

Vesalius is the latinized form of Andreas van Wesel. In his research, Vesalius boldly demonstrated that Galen's anatomical teachings, considered authoritative in medical schools, were in many cases erroneous, being actually based on animal dissections rather than direct research on humans.

Born in Brussels, Vesalius studied at the University of Paris and received his medical degree at the University of Padua, where he became a lecturer on surgery. After he wrote De humani corporis fabrica, he was appointed personal physician to the Holy Roman Emperor, Charles V and later served under Charles' son, Philip II of Spain. He died in 1564 after being shipwrecked while returning from a pilgrimage to the Holy Land. His seven-volume work on the structure of the human body was fully illustrated with fine engravings and is considered a lasting contribution to the field of anatomy. 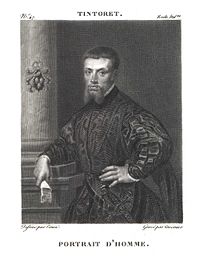 Portrait of Vesalius by Tintoretto

Vesalius was born in the Habsburg Netherlands to a family of physicians. His great-grandfather, Jan van Wesel received his medical degree from the University of Pavia and taught medicine in 1428 at the then newly founded University of Leuven. His grandfather, Everard van Wesel, was the royal physician of Emperor Maximilian, while his father, Andries van Wesel, went on to serve as apothecary to Maximillian, and later a valet de chambre to his successor Charles V. Andries encouraged his son to continue in the family tradition and enrolled him in the Brethren of the Common Life in Brussels to learn Greek and Latin prior to learning medicine, according to standards of the era.

In 1528 Vesalius entered the University of Louvain to study arts, but later decided to pursue a career in medicine at the University of Paris, where he moved in 1533. He studied the theories of Galen under the auspices of Jacques Dubois (Jacobus Sylvius) and Jean Fernel. It was during this time that he developed his interest in anatomy and was often found examining bones at the Cemetery of the Innocents.

Vesalius was forced to leave Paris in 1536 due to the beginning of hostilities between the Holy Roman Empire and France, and returned to Leuven, where he completed his studies under Johannes Winter von Andernach and graduated the next year. His thesis was a commentary on the ninth book of the great Muslim physician and alchemist, al-Razi. He remained at Leuven only briefly before leaving after a dispute with his professor. After settling briefly in Venice in 1536, he moved to the University of Padua to study for his doctorate, which he received in 1537. On graduation he was immediately offered the chair of surgery and anatomy at Padua, and he also lectured at Bologna and Pisa. 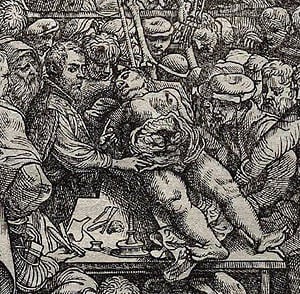 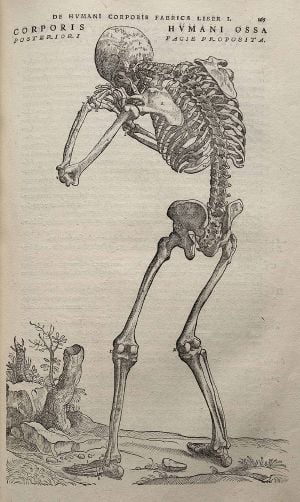 Previously Vesalius' topics had been taught primarily from reading classic texts, mainly Galen, followed by an animal dissection by a barber-surgeon whose work was directed by the lecturer. No attempt was made to actually check Galen's claims, as these were considered unassailable. Vesalius, on the other hand, carried out dissection as the primary teaching tool, handling the work himself while his students clustered around the table. He considered hands-on, direct observation the only truly reliable resource, a huge break with medieval practice.

He kept meticulous drawings of his work for his students in the form of six large illustrated anatomical tables. When he found that some of these were being widely copied, he published them in 1538. He followed this in 1539 with an updated version of Galen's anatomical handbook, Institutiones Anatomicae. When this reached Paris, one of his former professors published an attack on this version.

In 1538, Vesalius also published a letter on bloodletting, which was a popular treatment for almost any illness. The classical Greek procedure, advocated by Galen, was to let blood from a site near the location of the illness. However, the Muslim and medieval practice was to draw a smaller amount blood from a distant location. Vesalius' pamphlet supported Galen's view, and supported his arguments through anatomical diagrams.

In 1539, a Paduan judge became interested in Vesalius' work and made bodies of executed criminals available to him for dissection. He soon built up a wealth of detailed anatomical diagrams, the first accurate set to be produced. Many of these were produced by commissioned artists, and were therefore of much better quality than those produced previously.

In 1541, while in Bologna, Vesalius uncovered the fact that all of Galen's research had been based only on animal anatomy since dissection of humans had been banned in ancient Rome. Until Vesalius pointed this out, it had gone unnoticed and had long been the basis of studying human anatomy. He then published a correction of Galen's Opera omnia and began writing his own anatomical text. However, some people still chose to follow Galen and resented Vesalius daring to challenge the unimpeachable master.

Undeterred, he went on to stir up more controversy, this time challenging not only Galen but also the great fourteenth-century Italian professor Mondino de Liuzzi, and even Aristotle. All three, he argued, had made assumptions about the functions and structure of the heart that were clearly wrong. For example, Vesalius noted that the heart had four chambers and that the blood vessels originated in the heart, not the liver. Other examples of Vesalius disproving Galen included his discovery that the lower jaw was only one bone, not two, which Galen had assumed from animal dissection, and his proof that blood did not pass through the interatrial septum.

In 1543, Vesalius conducted a public dissection of the body of Jakob Karrer von Gebweiler, a notorious felon from the city of Basel, Switzerland. With the cooperation of the surgeon Franz Jeckelmann, he assembled the bones and finally donated the skeleton to the University of Basel. This preparation (“The Basel Skeleton”) is the world’s oldest known anatomical preparation. It is still displayed at the Anatomical Museum of the University of Basel. 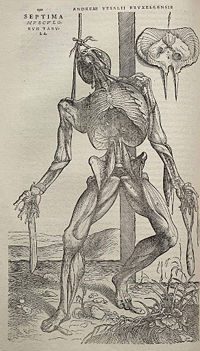 In 1543, Vesalius asked philologist Johannes Oporinus to help him publish the seven-volume De humani corporis fabrica (On the fabric of the human body), a groundbreaking work of human anatomy. Dedicated to Charles V, this work is thought to have been illustrated in part by Titian's pupil Jan Stephen van Calcar. In the same year, he published an abridged edition for students, and dedicated it to Charles' son Philip II of Spain.

Though Vesalius' work was not the first to be based on actual autopsy, its production values, highly detailed and intricate plates, and the fact that the artists who produced it were clearly present at the dissections themselves made it into an instant classic. Pirated editions were available almost immediately. Vesalius was only 30 years old when the first edition of Fabrica was published.

The work emphasized the priority of dissection and what has come to be called the "anatomical" view of the body—seeing human internal functioning as an essentially corporeal structure filled with organs arranged in three-dimensional space. This was in stark contrast to many of the anatomical models used previously, which were based largely on Galen and Aristotle, as well as elements of astrology. Although relatively modern anatomical texts had been published previously by Mondino de Liuzzi and Jacopo Berengario da Carpi, much of their work was clouded by Arabian doctrines and continued reverence for Galen. 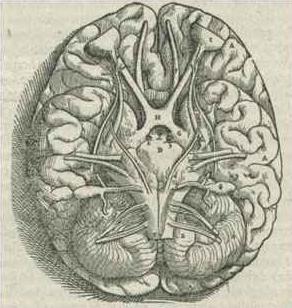 Illustration showing the base of the brain.

De humani corporis fabrica featured many new insights. Besides the first good description of the sphenoid bone, Vesalius showed that the sternum consists of three portions and the sacrum of five or six. He accurately described the vestibule in the interior of the temporal bone. He not only verified the observation of Etienne on the valves of the hepatic veins, but he described the vena azygos and discovered the canal which passes in the fetus between the umbilical vein and the vena cava, since named ductus venosus. He described the omentum, and its connections with the stomach, the spleen, and the colon. He gave the first correct views of the structure of the pylorus, observed the small size of the caecal appendix in man, gave the first good account of the mediastinum and pleura, and his era's fullest description of the anatomy of the brain. However, he did not understand the inferior recesses; and his account of the nerves is confused. In this work, Vesalius also becomes the first person to describe mechanical ventilation. 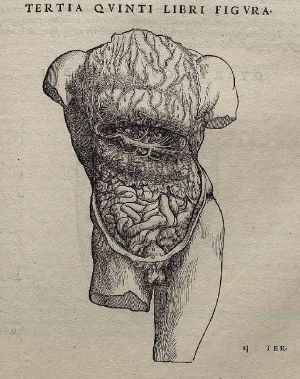 Soon after the publication of the De humani corporis fabrica, Vesalius was invited to serve as imperial physician to the court of Emperor Charles V. Upon taking up his position in the court, he had to deal with other physicians mocking him as being a "barber" as a result of his reliance on surgery and dissection.

Over the next 12 years, Vesalius traveled with the court, treating injuries from battle or tournaments, performing surgeries and postmortems, and writing letters addressing specific medical questions. During these years he also wrote Radicis Chynae, a short text on the properties of a medical plant, whose use he defended, as well as a defense for his anatomical findings. This elicited a new round of attacks on his work and even calls for him to be punished by the emperor. In 1551, Charles V commissioned an inquiry in Salamanca to investigate the religious implications of his methods. Vesalius' work was cleared, but the attacks continued. Four years later, one of his main detractors published an article that claimed that although Vesalius findings might be correct, Galen could not be wrong; therefore the human body itself had changed since Galen had studied it.

After the abdication of Charles, Vesalius continued at court in great favor with Charles' son Philip II, who rewarded him with a pension for life and by being made a count palatine. In 1555, he published a revised edition of De humani corporis fabrica.

In 1564, Vesalius went on a pilgrimage to the Holy Land. He sailed with the Venetian fleet under James Malatesta via Cyprus. When he reached Jerusalem, he received a message from the Venetian senate requesting him again to accept the Paduan professorship, which had become vacant by the death of his friend and pupil Fallopius. However, after struggling for many days with the adverse winds in the Ionian Sea, his ship was wrecked on the island of Zakynthos, where he soon died at the age of 50. At the time of his death he was in such debt that a benefactor had to pay for his funeral.

For many years it was assumed that Vesalius's pilgrimage was due to the pressures of the Inquisition. Today, this is generally considered to be without foundation.

Vesalius challenged the prevailing idols of his era: Galen and Aristotle, often at grave risk to his reputation and professional career. In so doing, he made important scientific discoveries and helped change the attitudes of physicians toward the study of the human body. He is rightly known as the father of the modern study of anatomy.