Sermon on the Mount 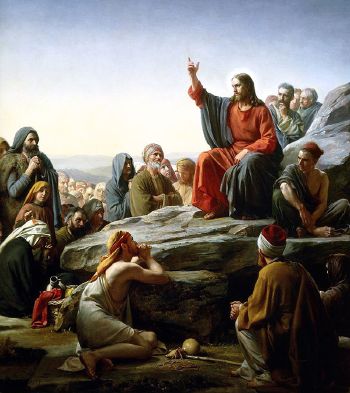 The Sermon on the Mount by Carl Heinrich Bloch.

The Sermon on the Mount is believed to be a sermon given by Jesus of Nazareth to his disciples, as recorded in chapters 5-7 of the Gospel of Matthew. The words epitomize Jesus' moral teachings in the context of the Mosaic Law. While biblical literal interpreters believe these verses represent an accurate record of an actual speech given by the historical Jesus, critical scholars take it to be a compilation of sayings attributed to Jesus, some historical, some not.

Recent scholarship has led some to conclude that the sermon was meant as a summary of Jesus' teaching for Matthew's Jewish-Christian audience. It emphasizes the need for continued obedience to most of the precepts of the Mosaic Law, and to go beyond the required major commandments. Some Christians believe that the Sermon on the Mount shows Christ as initiating a "New Covenant." That covenant effectively nullified the old Law of Moses. To many readers, the sermon contains the central tenets of Christian discipleship and is considered as such by numerous religious and moral thinkers, such as Leo Tolstoy, Mahatma Gandhi, Dietrich Bonhoeffer, and Martin Luther King, Jr.. Its teachings have also been one of the main sources of Christian pacifism.

The best-known portions of the open-air sermon comprise the Beatitudes, found at the beginning of Matthew's reportage. The sermon also contains the Lord's Prayer and the injunctions to "resist not evil" and "turn the other cheek." Also, there is Jesus' version of the Golden Rule. Other lines often quoted are the references to "salt of the Earth," "light of the world," and "judge not, lest ye be judged." It concludes with an admonition not only to hear Jesus' words, but to do them, a teaching which some commentators find to be at odds with the Pauline emphasis on faith in Jesus as opposed to works as the key to salvation.

The Gospel of Matthew groups Jesus' teachings into five discourses, of which the Sermon on the Mount is the first. Those accepting the ancient church tradition of Matthean authorship take the sermon as what it purports to be (Matthew 5:2), namely the actual words of Jesus given on the occasion described. Critical scholars tend to see portions of the Sermon on the Mount and the parallel Sermon on the Plain in the Gospel of Luke as having been drawn from a common "sayings source" document known as Q. Tending to confirm this idea is that fact that some of the sayings can also be found in the apocryphal Gospel of Thomas. However, others argue that the parallels in Luke tend to be very loose, and that the Gospel of Thomas could have borrowed the verses either from Matthew or Luke. The Church of the Beatitudes, high on a northern hill overlooking the Sea of Galilee.

Matthew sets the Sermon on the Mount near the very beginning of Jesus' ministry. After being baptized by John the Baptist (chapter 3), Jesus is tempted by Satan in the wilderness (4:11). He then learns that John has been arrested and returns to Galilee. There, he begins to preach the same message that John did: "Repent, for the Kingdom of Heaven is hand." In Galilee, Jesus gathers disciples and begins to attract a wider following as a healer and exorcist. News of his ministry spreads throughout the area, including not only the Galilee but also Syria, the Decapolis, the Transjordan, and Judea (4:2-25).

In Matthew, the Sermon on the Mount is the first unique teaching of Jesus, distinct from the message already proclaimed by his forerunner John. Seeing the crowds, he walks up a mountainside and sits down; it is not the crowds whom Jesus addresses, but his disciples: "His disciples came to him, and he began to teach them" (5:1-2). Indeed, some commentators indicate that Jesus seems have gone up the mountain not to gain a better platform from which to address a large audience, but to escape those who have been attracted by his healing ministry, so that he may address his disciples in private.

There are no actual mountains in this part of Galilee, but there are several prominent hills in the region to the west of the Sea of Galilee, and so a number of scholars do not feel "the mount" is the most accurate understanding of the sermon's setting. One possible location of the sermon is on a hill that rises near Capernaum. Known in ancient times as Mt. Eremos and Karn Hattin, this hill is now the site of a twentieth century Roman Catholic chapel called the Church of the Beatitudes. 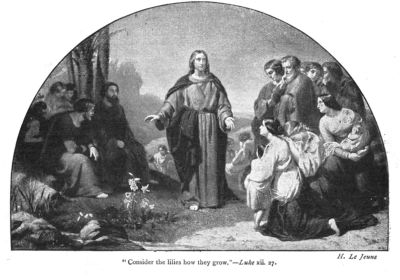 "See how the lilies of the field grow. They do not labor or spin. Yet I tell you that not even Solomon in all his splendor was dressed like one of these."

The sermon comprises the following components:

Introductory narrative (Matthew 5:1-2)—A large crowd assembles due to Jesus healing the sick, so he climbs a mountain and speaks to his disciples.

The Beatitudes (Matthew 5:3-12)—A series of eight (or nine) blessings describing the character of the people of the kingdom, such as meekness, purity of heart, humility, being a peacemaker, and experiencing persecution.

Metaphors of Salt and Light (Matthew 5:13-16)—This concludes the picture of God's people drawn in the Beatitudes, calling them the "salt of the earth" and the "light of the world." It includes a stern warning to those who disciples who faith to manifest these characteristics.

Expounding of the Law (Matthew 5:17-48)—Jesus declares his commitment to the Mosaic Law "until heaven and earth shall pass away." His disciples must keep the commandments more carefully than the Pharisees do and must go even beyond the requirements of certain key commandments: not just "do not kill," but do not be angry; not just "do not commit adultery," but do not even look at a woman with lust; not just "love your neighbor," but "love you enemy," and so on. In total, the disciples must "be perfect as your Heavenly Father is perfect."

Discourse on ostentation (Matthew 6)—Jesus criticizes fasting, alms, and prayer when they are only done for show, and not from the heart. Within the context of his criticism of hypocritical prayer, Jesus provides his famous example of correct prayer, known as The Lord's Prayer. The discourse goes on to urge the disciples not to worry about material needs, but to seek God's kingdom first and store their "treasures in heaven."

Discourse on holiness (Matthew 7:1-29)—Jesus condemns those who judge others before first perfecting themselves, encouraging his disciples to "seek and knock," for the way, though narrow, shall be opened to them. He warns against false prophets, for the "tree" is known by its "fruit." He concludes by urging his disciples to be not only "hearers" but "doers" of his teachings, for mere "hearers" build on a shifting foundations while "doers" built on solid rock.

The Sermon on the Mount is one of the most debated works in all of literature, let alone the Bible itself. One of the key points in the debate has to do with its relationship to traditional Judaism. Many Christians believe that Jesus presented a "new law" in the Sermon on the Mount, to replace the "old law" of Moses. The reference to going up a mountain prior to preaching is considered by many to be deliberate reference to Moses on Mount Sinai, fitting with a consistent theme in the Gospel of Matthew to present Jesus as a new Moses.

Contemporary scholars tend to admit that Matthew does present Jesus as a new Moses, but have questioned the traditional Christian view that Jesus, in effect, abolished the "Old Testament" law when initiating a "New Covenant." In this view, Matthew wrote for a Jewish-Christian audience that indeed perceived itself as being in an adversarial relationship with traditional Judaism, but also held strictly to most of the Mosaic Law. Thus, Jesus was quite serious when he declared: 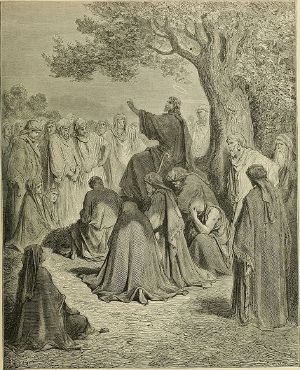 Do not think that I have come to abolish the Law or the Prophets; I have not come to abolish them but to fulfill them. I tell you the truth, until heaven and earth disappear, not the smallest letter, not the least stroke of a pen, will by any means disappear from the Law until everything is accomplished. Anyone who breaks one of the least of these commandments and teaches others to do the same will be called least in the kingdom of heaven, but whoever practices and teaches these commands will be called great in the kingdom of heaven. For I tell you that unless your righteousness surpasses that of the Pharisees and the teachers of the law, you will certainly not enter the kingdom of heaven (5:17-20).

Another key debate over the sermon is how literally it was meant to be applied to everyday life. Almost all Christian groups have developed non-literal ways to interpret and apply the sermon. Biblical scholar Harvey K. McArthur (1978) lists 12 basic schools of thought on this issues:

Comparisons with the Sermon on the Plain

The Sermon on the Mount may be compared with the similar but more succinct Sermon on the Plain as recounted by the Gospel of Luke (6:17–49), which occurs at a similar moment in Luke's narrative, although Luke first provides additional details about Jesus' work in and around Nazareth. In Luke's version, Jesus ascends a mountain to pray with his disciples and then comes down and delivers his sermon to a large crowd in a level place. Some scholars believe that this is simply Luke's account of the same sermon, while others hold that Jesus simply gave similar sermons in different places, as do many preachers. Still others hold that the two "sermons" represent the two authors; different ways of presenting a number of sayings of Jesus recorded in the Q document as if they were part of a single sermon.[1]