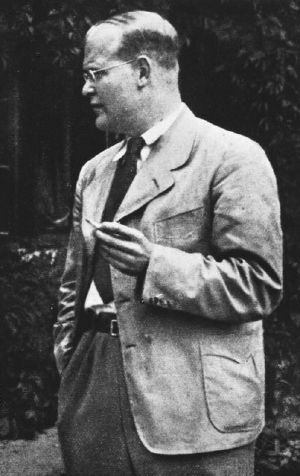 Dietrich Bonhoeffer (born February 4, 1906 in Breslau, now Wrocław, Poland; died April 9, 1945 at Flossenbürg concentration camp) was a German religious leader and participant in the resistance movement against Nazism. A Lutheran pastor and theologian, he played a key role in the leadership of the Confessing Church that resisted Hitler's attempts to co-opt mainstream German Protestantism. He publicly opposed anti-Semitism and continued organizing and educating young Confessing Church ministers even after such activities were declared illegal by the Nazi regime. Although he had once been a pacifist, during World War II Bonhoeffer took part in plots by members of the German Military Intelligence Office to assassinate Hitler. He was arrested and initially imprisoned for his resistance to Nazi policy and for helping Jews escape from Germany. Following the failure of the July 20, 1944 assassination attempt against Hitler, his participation in previous plots was discovered. He was sent to a series of prisons and concentration camps and finally hanged shortly before the end of the war.

Bonhoeffer's writings, especially his book The Cost of Discipleship have become classics of Christian literature, criticizing what he called "cheap grace" and emphasizing that salvation by grace in no way excuses Christians from loving their neighbors or from "taking up the Cross" and following Jesus. 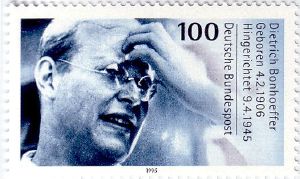 Born into a large family, Bonhoeffer had seven siblings, including a [twin]] sister, Sabine. His father was a prominent psychiatrist in Berlin. His mother homeschooled the children. Though he was initially expected to follow his father into the field of psychology, he decided at a young age to become a minister. His parents supported this decision, and when he was old enough, he attended college in Tübingen. He received his doctorate in theology from the University of Berlin, and was ordained as a Lutheran minister.

After his ordination, Bonhoeffer spent a post-graduate year abroad studying at Union Theological Seminary in New York City. During this time, he grew disillusioned with what he felt was Liberal Christianity's failure to preach personal salvation. However, he found inspiration in his many visits to the African Methodist Episcopal Church in Harlem, where he heard Adam Clayton Powell, Sr. preach the message of the Social Gospel. He thus developed a passionate commitment to social justice and became concerned about the ineptitude of the church to bring about racial integration. He also became enthralled with the power of Black Gospel music and amassed a substantial collection of recordings, which he took with him back to Germany and shared with acquaintances.[1] 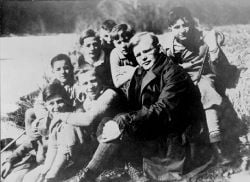 Bonhoeffer with several of his seminary students in 1932

Bonhoeffer returned to Germany in 1931, where he lectured on theology in Berlin and wrote several books. A strong opponent of Nazism, he was involved, together with Martin Niemöller, Karl Barth and others in organizing the future "Confessing Church," which resisted Hitler's attempts to co-opt mainstream German Protestantism. Shortly after Hitler was installed as Chancellor in January 1933, Bonhoeffer delivered a radio address in which he attacked Hitler and warned Germany against slipping into an idolatrous cult of the Führer. He was cut off the air in the middle of a sentence. In April 1933, he raised the first public voice for German church resistance to Hitler's persecution of the Jews, declaring that the church must not simply "bandage the victims under the wheel, but jam the spoke in the wheel itself." Nevertheless, in September, a national Protestant church synod at Wittenberg approved the pro-Nazi Aryan Paragraph prohibiting Christians of Jewish background from holding jobs as clergy. When Bonhoeffer himself was offered a parish post in Berlin, he refused it in protest of the church's [racism|racist] policy. Between late 1933 and 1935 he served as pastor of two German-speaking Protestant churches in London where he was relatively free to speak out and help coordinate international opposition to Nazi policies. In 1934 he assisted his mentor, Barth, in drafting the Barmen Declaration, which affirmed that the Confessing Church was the true Evangelical Church of Germany, refused to recognize Hitler as the head of German Church, and affirmed that any State's authority ends where it violates God's commandments.[2]

In 1935 Bonhoeffer returned to Germany to head an underground seminary for Confessing Church pastors, in Finkenwalhde. As the Nazi suppression of the Confessing Church intensified, Bonhoeffer's authorization to teach at the University of Berlin was revoked, in August 1936. Niemöller was arrested in July 1937. By August, Heinrich Himmler decreed the education and ordination of Confessing Church ministers to be illegal. The Gestapo closed the seminary at Finkenwalde and by November it had arrested 27 pastors and former students. It was around this time that Bonhoeffer published his best-known book, the The Cost of Discipleship, a study on the Sermon on the Mount in which he attacked "cheap grace" as a cover for ethical laxity and encouraged Christians to accept "costly grace" by following Jesus' example of courageous sacrificial love for one's fellow man.[1]

Bonhoeffer spent the next two years secretly traveling from one eastern German village to another to supervise and further instruct his students, most of whom were working illegally in small parishes within the old-Prussian Ecclesiastical Province of Pomerania. In 1938, the Gestapo banned Bonhoeffer from Berlin. In the summer of 1939, the seminary, operating essentially underground, was reestablished at Sigurdshof, an outlying estate of the von Kleist family in Wendish Tychow. In March 1940, the Gestapo shut down the seminary there following the outbreak of World War II.

Meanwhile, in 1939 Bonhoeffer had joined a hidden group of high-ranking military officers based in the Abwehr, the Military Intelligence Office, who wanted to overthrow the Nazi regime by killing Hitler. In 1943, after money that had been used to help Jews escape to Switzerland was traced to him, he was charged with conspiracy and imprisoned in Berlin for a year and a half. Then, in the wake of the unsuccessful July 20 Plot in 1944, authorities uncovered evidence of Bonhoeffer's connections to the conspirators, and he was moved to a series of prisons and concentration camps, ending at Flossenbürg. There, Bonhoeffer was executed by hanging at dawn on April 9 1945, just three weeks before the liberation of the city. Also hanged for their parts in the conspiracy were his brother Klaus and his brothers-in-law Hans von Dohnanyi and Rüdiger Schleicher. All four men were forced to strip down completely in their cells before walking totally naked to the gallows.[3] 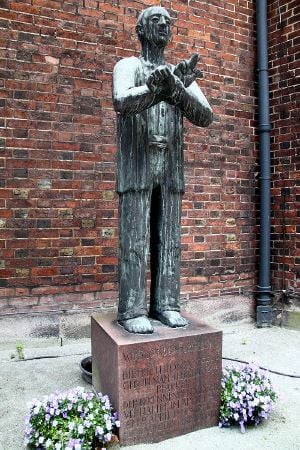 The memorial of Dietrich Bonhoeffer in Wrocław, Poland

Bonhoeffer's life as a pastor and theologian, and who lived as he preached, exerted great influence and inspiration for Christians across broad denominations and ideologies, including Martin Luther King, Jr. and the Civil Rights Movement in the United States, the anti-communist democratic movement in Eastern Europe during the Cold War, and the anti-Apartheid movement in South Africa. Although he was not formally absolved of his supposed crimes by the German government until the mid-1990s, today he is celebrated in Germany as a fine example of the true German spirit and is widely recognized as a martyr for his faith. The Deutsche Evangelische Kirche in Sydenham, London, at which he preached between 1933 and 1935, was destroyed by bombing in 1944. A new church was built there in 1958 and named Dietrich-Bonhoeffer-Kirche in his honor.[4] He was commemorated as a theologian and martyr by the United Methodist Church, Evangelical Lutheran Church in America and several branches of the Anglican Communion, including the Episcopal Church (USA), on the anniversary of his death, April 9. 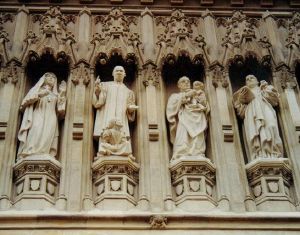 Bonhoeffer also left an important legacy in his theological writings. Central to his theology is Christ, in whom God and the world are reconciled. He speaks of God as a suffering God, whose manifestation is found in love for all people. Bonhoeffer believed that the Incarnation of God in flesh made it unacceptable to speak of God and the world "in terms of two spheres"—an implicit attack upon Luther's doctrine of the two kingdoms. He stressed both personal and collective piety and revived the idea of imitation of Christ. He argued that Christians should not retreat from the world but act within it. For Bonhoeffer, true faith consists of two elements: the implementation of justice and the acceptance of divine suffering.[5] He thus insisted that the church, like the early Christians, "had to share in the sufferings of God at the hands of a godless world," in order to be a true church of Christ. Echoing the Epistle of James, he emphasized that "faith without works is dead," urging Christians to avoid what he called "cheap grace" but instead to take up the Cross of Christ by loving one's neighbors even at the cost of one's life if necessary. An oft-quoted line from one of his more widely read books, The Cost of Discipleship (1937), foreshadowed his death: "When Christ calls a man, he bids him come and die." His books Ethics (1949) and Letters and Papers from Prison (1953) were published posthumously.

The theological and political reasons behind his shift from Christian pacifism to participation in planning the assassination of Hitler are much debated. He left no descendants, as his planned marriage the Maria von Wedemeyer could not be realized due to his imprisonment three months after their engagement and his subsequent martyrdom. [6]