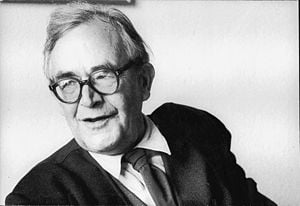 Karl Barth (May 10, 1886 – December 10, 1968), from Switzerland, was the greatest Protestant theologian of the twentieth century that changed the course of Christian theology significantly. Many have mentioned him in the same breath with Augustine, Thomas Aquinas, Luther, Calvin and Schleiermacher.

His theology, emphasizing the importance of divine revelation given in our faith as the real source of knowledge on God, seriously challenged nineteenth-century liberal theology's unity between God and human beings in human terms, thus launching the school of Neo-Orthodoxy which inspired a whole generation of Protestants.

According to Barth, a new divine revelation given in our faith now revealed God as a God of love who decided to seek his partners of love. Based on this new perspective, Barth's later, more mature theology built a new synthesis of God and humans that was no longer in human terms. Because of his poposed transformation of the divine-human unity, he is entitled to be called a unifier in spite of his vehement attack upon nineteenth-century liberal theology. The importance of his theology in this regard is much recognized in the Catholic Church as well.

Born in Basel, Switzerland as son of a Reformed minister and New Testament scholar, Karl Barth decided on the day before his confirmation at the age of 15 to become a theologian in order to know what the creed was all about. From 1904-1909 he was exposed to the prevailing liberal theological education of his time in the Schleiermacherian and Ritschlian traditions, by attending the Universities of Bern, Berlin, Tübingen, and Marburg, where he studied with such prominent liberal theologians as Adolf von Harnack, Wilhelm Herrmann, and Johannes Weiss.

After working as apprentice pastor in Geneva from 1909-1911, he served as pastor of the Reformed Church in Safenwil, Switzerland till 1921. It was during this period that ninety-three German intellectuals, including his former theological teachers, signed a manifesto in support of the Kaiser and the German war policy (1914)—the World War finally broke out (1914), killing nine million soldiers and civilians by its end. The war was so devastating that it greatly challenged the optimism of liberalism at that time. He as a pastor, therefore, struggled as to which message to address to his congregation.

This led Barth to turn to the Bible with his close friend Eduard Thurneysen and in 1916 he started to appreciate the biblical theme of the priority of God over humans: “It is not the right human thoughts about God which form the content of the Bible, but the right divine thoughts about men. The Bible tells us not how we should talk with God but what he says to us.”[1] This marked his departure from liberal theology’s humanistic accommodation of God to culture. In 1919 he published his famous commentary, The Epistle to the Romans (Der Römerbrief). Although its apocalyptic vision was still mingled with some utopianism, this publication gave a great impact upon many people who were experiencing the bitter aftermath of the World War and who were therefore seeking the primacy of God’s guidance in human affairs.

During the period of his professorship at Göttingen in Germany (1921-1925), Barth published the second edition of The Epistle (1922). This, a complete rewrite, showed his even more radically conservative position. It now emphasized the radical transcendence of God as the “wholly other,” the judgment of God against the world in its entirety, and the importance of our faith and repentance, thus constituting a bombshell thrown to any liberal theological attempt to synthesize the divine with the human. Here we can see his similarity to Martin Luther in the sixteenth century, who, based on a principle of sola fide, vehemently criticized the medieval synthesis of God and the world. Hence the school of theology Barth started is often called “Neo-Reformation” as well as “Neo-Orthodoxy.”

Barth’s conservative, combative, and even countercultural stance has been criticized by many. But that criticism turns out to be largely irrelevant when we know his later, moderate and mature theological development, which actually made him a unifier rather than a separator. This important point has tended to be overlooked because of the initial impact of explosion his earlier position exerted upon liberalism. His later life of theological maturation covers the period of his professorship at Bonn (1930-1934), the period of his professorship at Basel, Switzerland (1935-1962), and his retirement period (1962-1968). The following several points show how his later theology went beyond the gulf between God and humans to reach their “partnership” in love.

According to Barth, faith, as long as it is true faith that entails humility on our part, does not stay as faith forever, but rather results in our true knowledge of God because God now reveals himself in the true faith. This is how the gulf between God and us can be overcome. Barth called this new relationship between God and us the “analogy of faith” (analogia fidei) in lieu of the Catholic doctrine of the “analogy of being” (analogia entis). This point can be seen in his Anselm: Fides Quaerens Intellectum, published in 1931.

Freedom and love in God

He started writing his multi-volume Church Dogmatics in 1932. Its volume II/1 (“The Doctrine of God”), published in 1940, maintains that God has the dual characteristics of freedom (essence) and love (revelation). While in his essence he is absolutely free from anything, God freely chose to create us and reveal himself to stay with us in love. This shows Barth’s unique way of unity.

Although in 1934 Barth wrote the provocative pamphlet “Nein!” (No!) to reject Emil Brunner’s postulate of a natural “point of contact” (Anknüpfungspunkt) for our reception of the gospel, soon afterwards he considered Christ to be that point of contact between God and us. This was evident in the later volumes of Church Dogmatics. The image of God, which is God’s intention of relationship, is perfected in Christ the Incarnation, who in turn can relate to humans in whom the image of God is copied. This point has a corollary, which is that as long as the image of God is copied in humans, they can also truly relate to one another as fellow humans, reflecting God's intention of relationship.

The humanity of God

His lecture on this topic, delivered in 1956, defines the “humanity of God” as “God’s relation to and turning toward man,” as contrasted with the other side of God, i.e., the “deity of God” which is “a God…overwhelmingly lofty and distant, strange, yes even wholly other.”[2] Because of the humanity of God, humans have a distinctive position as God’s “partners.”[3]

In 1934 he spearheaded this declaration against Hitler’s “Evangelical Church of the German Nation,” arguing that all areas of our life including politics should be under Christ, i.e., that God is deeply related to every aspect of the actual world. Because of his involvement in this declaration, Barth was suspended from his teaching post at Bonn and in 1935 he was expelled from Germany.

Volume II/2 of Church Dogmatics, published in 1942, clearly shows that Barth broke boldly with Calvin over election and predestination because of his new realization of humans as God’s partners of love. If God freely chose to stay with us in love, he would include all persons for salvation in Christ. It was perhaps because of this new reconstruction on election that Barth refused to criticize Communists during the Cold War era with the same vigor he had shown to Nazism.

Karl Barth was a providential theologian. As a “Neo-Reformer” in the beginning of the twentieth century, he effectively challenged nineteenth-century liberal theology's project of unity between God and the world in human terms. He attempted to liberate God from liberal theology to make him a true God. According to him, a true God, as revealed to us in our faith, has the dual characteristics of freedom and love, although the element of divine love here does not make God’s act of creation absolutely necessary yet. Based on this new understanding of God, Barth reconstructed a true unity between God and humans in the realm of grace. The ecumenical character of this reconstructed unity between God and humans can be noticed by the fact that since the 1950s it has been appreciated by prominent Catholic theologians such as Hans Urs von Balthasar and Hans Küng.[4]

Furthermore, although Barth's earlier theology, to the dismay of religious pluralists such as John Hick, dismissed non-Christian religions as non-revelational man-made approaches that would never bring us to the divine, nevertheless the Swiss theologian's later, mature theology brought forth a potentiality for interfaith dialogue. Hence, an increasing number of comparative studies between Barth and non-Christian religions such as Buddhism have been done recently.